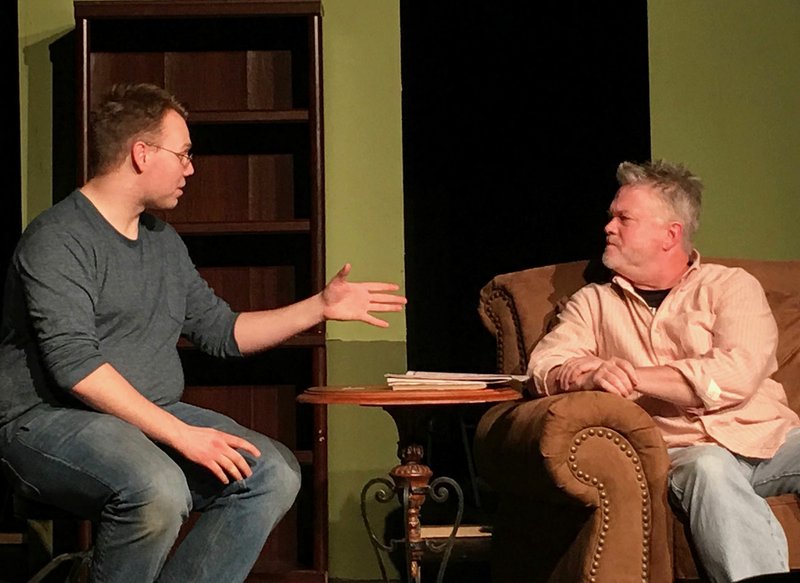 Elwood P. Dowd, left, played by David T.R. Goble, talks about his imaginary friend, Harvey, to Dr. Chumley, played by Jeff Pulliam, in this rehearsal scene from Harvey, which opens Friday at Center on the Square.

Colt Cannon of Searcy directs the local production, which is a comedy recommended for ages 12 and older.

Chase, an American playwright, wrote Harvey in 1944; she received the Pulitzer Prize for Drama for the play in 1945. The show premiered on Broadway on Nov. 1, 1944, and has been adapted for film and TV several times, including the 1950 film starring Jimmy Stewart.

The play revolves around the character Elwood P. Dowd, who has an imaginary friend, Harvey — a 6 1/2-foot-tall rabbit — and insists on introducing him everywhere he goes. Elwood’s sister, Veta, finds the situation embarrassing and decides to have Elwood committed to a sanitarium. When they arrive at the sanitarium, however, the doctors mistakenly commit Veta. The truth comes out, and Veta is released and realizes she has made a mistake in trying to commit Elwood.

Stewart played Elwood in the 1950 movie.

“Harvey is a witty and fun romp, suitable for the whole family but intellectually meant for adults,” said Cannon, who is making his directorial debut with Center on the Square. “The cast is a mixture of new and old faces for Center on the Square. We have a pretty even mix of COTS veterans and Harding [University] students. Everyone is working hard and doing their best to ensure a great time is had by all.”

Cannon has appeared in several productions at Center on the Square, including Something Funny Happened on the Way to the Forum, Vintage Hitchcock, Smoke on the Mountain and, most recently, as Charlie Baker in The Foreigner.

“This time I wanted to try the directorial approach to the art form,” he said.

Cannon received a degree in English from Harding, where he is the event-spaces technical assistant.

“I work with the theatrical lighting and rigging in Harding’s major productions and with shows that are hosted at Harding venues,” he said.

“I would have to say I’m approaching the character a little bit differently than Jimmy Stewart did in the movie,” Goble said. “As Elwood, I’m a bit more jovial and boisterous than Stewart. I would compare my Elwood to a smoother and calmer Teddy Roosevelt, who was very big and boisterous, whereas I find Stewart to be much more subdued and laid-back.

“I’m having so much fun with the role,” Goble said. “Elwood is such a great character. I think he is who we all wish we could be. He’s outgoing but not obnoxious, calm but not tranquilized. He treats everyone around him as if they were his oldest and deepest friends, even if they’ve only just met.

“The only part I don’t like is playing opposite Harvey,” Goble said, jokingly. “I do what I can, but sometimes it feels like he’s giving me nothing.”

Goble said the role is challenging in its simplicity.

“Elwood is so direct and free in his thought that it can be difficult to get out of the habit of overthinking,” he said. “I also have a hard time bringing my energy level down to match Harvey’s demeanor. I’m typically a pretty wired guy, but I’ve had to really slow down for this role.”

“I emphasized performance and currently work at the Arkansas Repertory Theatre in Little Rock, where I live,” he said. “I’ve been involved with Center on the Square for the past five years but have only been a board member for the past two.”

Penny Turpin, who is a current student at Harding, plays the role of Veta Simmons, Elwood’s sister.

“I am having a lot of fun with this role,” Turpin said. “I played Veta in high school, so playing her four years later has been a great experience. The challenge is always trying not to re-create a character you’ve played before and to try to be new and innovative.

“I’ve not seen the movie in a long while; however, the script is wonderful, and so is our director, and I hope that will serve as a tether to the integrity of the character so that all those familiar with her will enjoy the result.”

Turpin is a senior theater and English-education major at Harding.

“I would like very much to pursue theater to the fullest extent when I graduate and hope to gain my master’s in acting so that I could one day teach at the college level,” she said.

Connie Brown of Searcy, executive director of Center on the Square, gets in on the act during this show; she plays Mrs. Chauvenet.

“This will be my third production in as many years on the job,” Brown said, laughing. “Mrs. Chauvenet is described as a 65-year-old woman, dressed with the casual sumptuousness of a wealthy Western society woman and a longtime family friend.

“She is very fond of Elwood and very much wants to see him and catch up but is highly distressed and confused when introduced to Harvey,” Brown said. “I’m a few years shy of 65, but I think I can pull it off. It is a very small role, but there is humor in her scene, and I look forward to playing the part.”

Rounding out the cast are the following:

• Zachariah Slomers, a Harding student, appears as Dr. Lyman Sanderson, a young psychiatrist at the sanitarium.

• Jeff Pulliam of Searcy appears as Dr. William Chumley, head of the sanitarium, which is called Chumley’s Rest.

• Daniel Burley of Searcy plays Wilson, an orderly at the sanitarium.

Meals are served one hour before showtime.