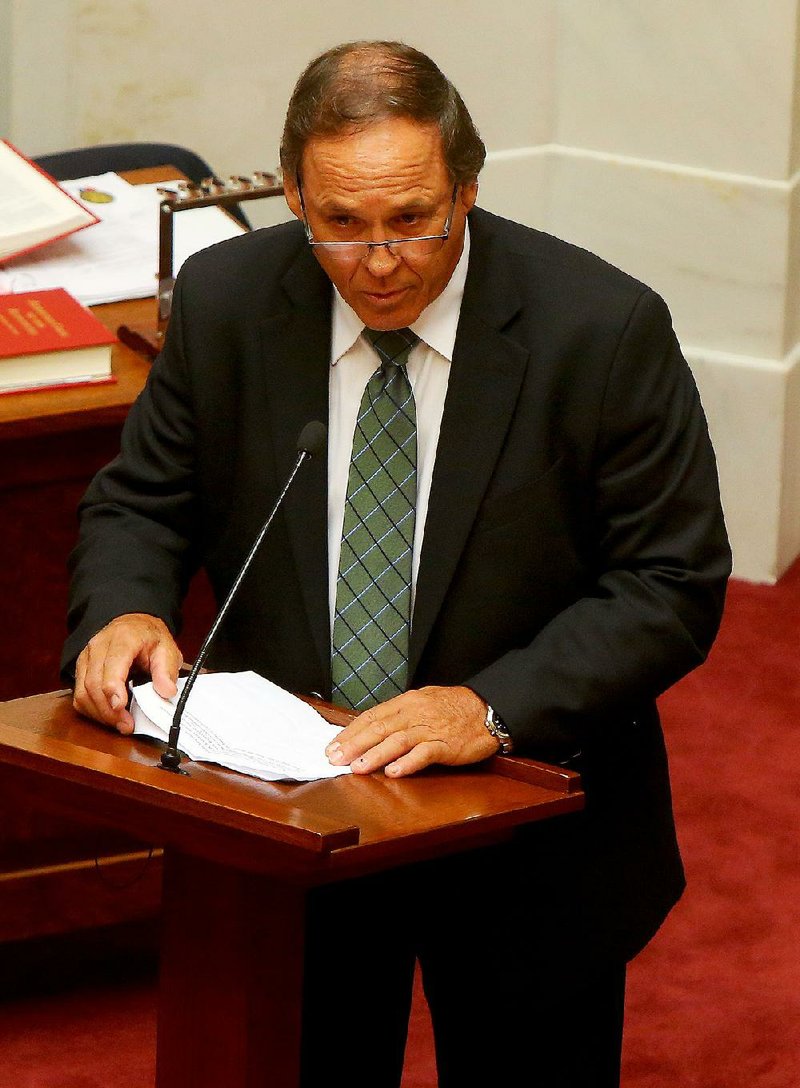 Sen. Gary Stubblefield, R-Branch, is shown in this file photo.

The Senate Education Committee approved legislation Wednesday that would make the identities of schools' security personnel a secret.

Senate Bill 12, by Sen. Gary Stubblefield, R-Branch, also would exempt from the Freedom of Information Act information that would "reasonably be expected to be detrimental to the public safety, including without limitation records or other information concerning emergency or security plans, school safety plans, procedures, risk assessments, studies, measures, or systems."

The Senate Education Committee approved the bill without dissent in a voice vote. It heads to the Senate for consideration.

"The Freedom of Information Act already protects the identities of law enforcement officials who work undercover and I think that should be extended to protect personal information of law enforcement personnel, campus security at colleges and K-12 institutions," Stubblefield said.

He said someone could request public records to plan an attack.

Asked by Sen. Uvalde Lindsey, D-Fayetteville, if the Arkansas Press Association had endorsed his bill, Stubblefield said he had no push-back.

Tom Larimer, executive director of the press association, said later that he opposed the bill and had reached out to Stubblefield multiple times to express his opposition. He said Stubblefield had told him that he did not plan to run the bill.

"The bill would create a cloak of secrecy around school security plans that would remove any possibility of the people knowing if they even have a security plan," Larimer said. "It closes everything related to the security plan. It's written very broadly. I really don't see what they are trying to hide."

Annie Bryant, a parent and grandparent from Pine Bluff, was the only person to speak against the bill in committee.

"I have an issue with it as far as parental empowerment," she said. "I'm concerned that parents may not be able to get the information they need in terms of the amount of security that's available on the campus for their children."

School security personnel have abused students in some cases, she said. She said she was concerned that the bill would guard against disclosure of those abuses.

But Richard Abernathy, executive director of the Arkansas Association of Educational Administrators, said he supported the bill.

He said afterward that some schools have staff members who carry concealed weapons.

"We just don't think it should be published out there who they are or where they might be stationed at or not stationed at in a school," he said.

He said he did not know of any incidents in which an attacker requested security records beforehand. He used the Columbine High School shooting in Colorado as an example of attackers knowing security plans and using that information to their advantage.

He said he did not believe the Columbine students involved in the shooting filed a Freedom of Information Act request beforehand.

Education Commissioner Johnny Key told a reporter Wednesday that he did not support or oppose the bill. He said he did not know of any attack in which a public-records request was involved.