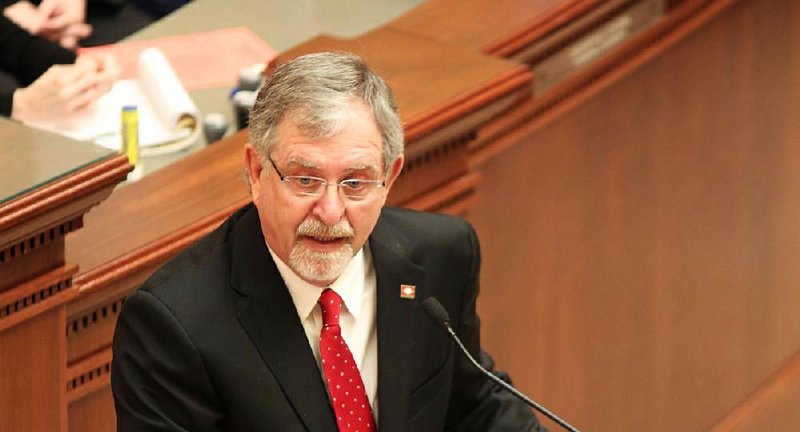 Rep. Lanny Fite, R-Benton, is shown in this file photo.

An overhaul of Arkansas' system of handling old tires failed by a single vote in the House on Friday after opponents of the bill pleaded for more time to consider legislation that is a priority of Gov. Asa Hutchinson.

Immediately afterward, the sponsor of House Bill 1267, Rep. Lanny Fite, R-Benton, said he would try to revive the bill Monday, and a chief opponent conceded that it was likely to pass.

Lawmakers who spoke both for and against Fite's bill agreed that the state's scrap-tire program is mired in inadequate funding and allegations of illegal dumping. But adding new fees on tires disproportionately hurts the poor, and local officials still are not fully aware of the regulatory impact, opponents said.

Meeting for the first time on a Friday this regular legislative session, House lawmakers debated the bill for about 30 minutes before the vote.

The original roll call was tallied 52 to 22 in favor of the bill, prompting opponents to request a procedural move to ensure that all the voting members were in their seats. Upon a second count, two votes for the bill were struck, and the bill failed by one vote. Passage required at least 51 votes in the 100-member House.

The procedural vote was called for by Rep. John Payton, R-Wilburn, the majority whip. He spoke against the bill at length Friday and said afterward that he would continue to push for changes, while adding that it likely had the votes to pass.

Fite agreed that he had the votes, and said he would not make changes but would call lawmakers who were sitting on the fence. Fifteen lawmakers voted present, and 13 did not vote, including Reps. Ken Henderson, R-Russellville, and George McGill, D-Fort Smith, whose "yeas" in the original vote were struck.

"If they can get someone to move for reconsideration, they won't have to change it," Payton said.

The state's waste-tire program is operated by a dozen regional districts funded by the Arkansas Department of Environmental Quality. Funds for each district are based in part on the population of the district's coverage area and in part on the number of tires each district reports processing.

The bill would distribute funds on the basis of the district's method of tire disposal. If a district sends tires to a landfill or a monofill, the district would get 75 cents per tire, with the amount adjusted for larger tires. A district that recycles or reuses tires would receive $1.25. Solid waste district officials have questioned those numbers -- some say they spend more than 75 cents to send tires to landfills, or more than $1.25 to recycle them.

Payton, an auctioneer and car dealer, said poor Arkansans would end up paying more in tire fees because they rely on used tires that have to be replaced several times a year.

The bill would also establish an electronic manifest system that would track tire shipments. Tire dealers, haulers and processing sites would have to register with the state and report how many tires they send or receive. An amendment to the bill provides a mechanism for tire dealers without computers to participate.

The legislation passed out of committee on a 12-to-4 vote earlier this week, where it got endorsements from the Department of Environmental Quality, local waste district officials and county judges.