Small still voices: Through the Storybook Project, Arkansas inmates can interact with their children 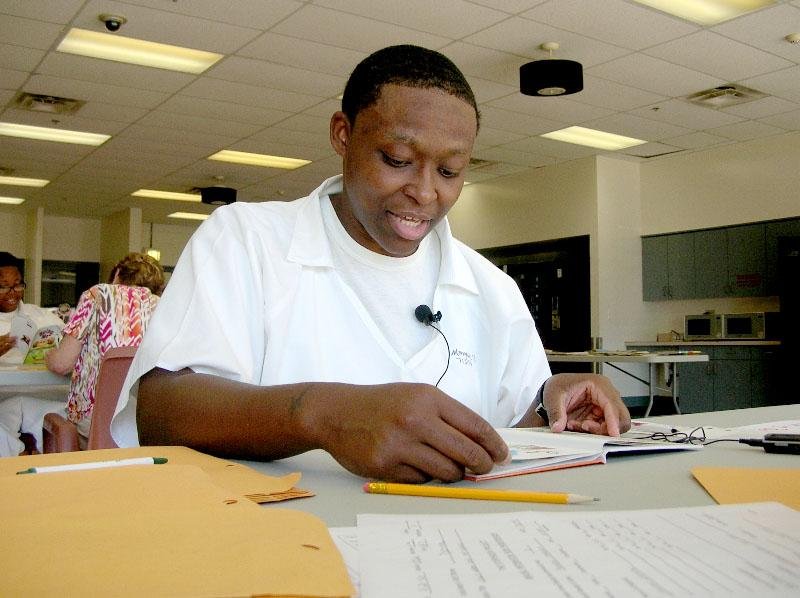 Yochechi Mangrum, an inmate at the Grimes Unit in Newport, reads and records a story as part of the Storybook Project. Volunteers visit the unit a few times a year to record inmates reading to their children or grandchildren.

When she looks at the faces of the inmates reading to their children, Pat Oplinger knows the Storybook Project of Arkansas is making a difference. 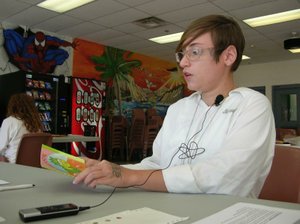 Photo by Special to the Democrat-Gazette/NANCY JEFFERY
Megan Stevens, an inmate at the McPherson Unit in Newport, participates in the Storybook Project, which gives inmates the opportunity to record themselves reading a book to their child or grandchild. 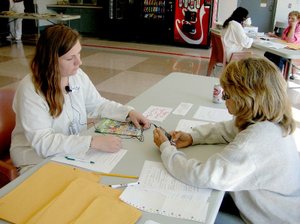 Photo by Special to the Democrat-Gazette/NANCY JEFFERY
Whitney Laxton (left) and volunteer Donna Stringer prepare for a recording. 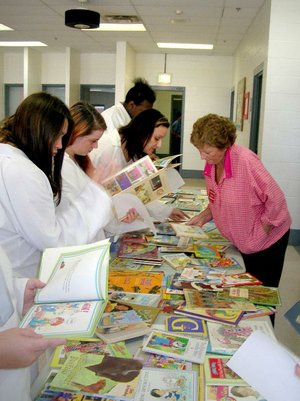 Photo by Special to the Democrat-Gazette/NANCY JEFFERY
Carolyn Morgan (right), president of the board of directors for the Storybook Project, helps inmates select books to read. 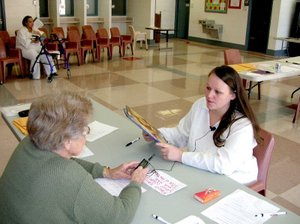 Pat Oplinger (left), founder of the Storybook Project of Arkansas, talks with inmate Amanda Yanez at the McPherson Unit in Newport. Volunteers from the project work one-on-one with inmates as they record themselves reading books to their children or grandchildren.

The outreach, which Oplinger started in the late 1990s, lets inmates record themselves reading a book to their child. The book and CD of the recording are then sent to the child.

Since the project's start, volunteers have helped thousands of inmates read stories to their children and they have sent books to more than 20,000 children in states across the country.

The purpose of the Storybook Project is twofold. It helps inmates stay connected with their children or grandchildren, and it improves literacy -- for the inmates and the children.

Oplinger, who lives in Cherokee Village, started the program after retiring from a 39-year career in education. A firm believer that retirees should use their skills and experience to help others, she was searching for a way to do just that.

She read a story in the local newspaper in Cherokee Village about a couple hosting a discussion on their ministry with death row inmates and decided to attend. While there, a young woman approached and asked why she was there. Oplinger told her she was looking for a way to use her skills to help people.

"Long story short, she did hard time and she said, 'I think I can give you some ideas of what prisoners need,'" Oplinger said.

After talking with the woman and thinking about how she could help, Oplinger came up with an idea that combined her wish to help others and her love of teaching. Books seemed to be a natural fit, and that's how the Storybook Project came about. The project's motto is "keeping families connected through reading."

A friend from church, the late Donald Heern, volunteered to help and the project got underway. The going was tough at first. Oplinger didn't want the fledgling organization to rely on state or federal money for help. She wanted a grassroots effort supported by donations. Receiving approval to get the program into one of the state's prisons also took awhile. There were security concerns to think about.

A few times a year -- twice in the spring and twice in the fall -- volunteers, many from the Cherokee Village area, get up early in the morning for the 90-minute drive to Newport. After clearing security the group sets up tables where they'll sit one-on-one with inmates for recording sessions. Tables are also filled with hundreds of books, and each inmate cleared for participation in the program can select one to read and record.

In the early days of the program the recordings were done on audiocassette tapes. The process is more high-tech now, and the readings are captured on a digital recorder and then burned onto CDs, with each one slipped inside the corresponding book for shipping.

Carolyn Morgan, who serves as president of the Storybook Project's board of directors, began volunteering with the program a few years after it started. She said the dedicated group of volunteers (usually six to eight on each trip) spends hours at each unit to record as many inmates as possible.

The recordings let the children at least hear their parent's voice even if they don't get to visit in person.

At the McPherson Unit, the group usually has 100 to 120 women waiting to read each time they visit, along with 30 to 40 men at the Grimes Unit. The children the inmates are reading for must be on their list of approved contacts, Morgan said.

"It screens out any offenders or people that have requested no contact," she said.

The books available are bought with donations or from money raised during fundraisers for the program. The selections range from board books for reading to infants and toddlers to chapter books for older children. Nancy Jeffery serves as secretary and searches for discounted new books to buy for the project, Morgan said.

"We do not want to send any beat-up books to the children," Morgan said.

Here's how the process works: After the inmate chooses a book to read, he is fitted with a small microphone. He starts the recording by saying the title of the book and his name, then he can share a personal message with the child or grandchild (or children/grandchildren) before reading either all or part of the book, depending on the length. For longer chapter books, Morgan said the inmate will sometimes read a chapter or two and then tell the child to read aloud at home.

"We record as many as we can in the time we have," Oplinger said.

Volunteers help the inmates select books at the appropriate reading level for their child or children and make suggestions for those with interests in particular sports or hobbies.

Sometimes inmates get emotional when they talk to their children on the recordings, and tears aren't uncommon. Oplinger said each volunteer keeps some tissues nearby. (If an inmate does get upset, the recording is paused so the children won't hear their parent crying.)

"Some of them get all choked up," Morgan said. "It gives them a chance to stop and realize what they are missing, but when they can actually talk to their children on tape it helps them get a connection and that's what we are trying to do."

Morgan and Oplinger said the inmates are appreciative.

"Every person I've had come to my table has said 'thank you,'" Morgan said. "I can't ever recall someone leaving without saying 'we really appreciate what you are doing.'"

They also receive feedback from the parents or caretakers of the children receiving the books.

"I have folders and folders of thank-you notes," Oplinger said. "When you get one from a child or their caretaker, it will keep you going back and jumping in a car at 6:15 in morning and driving to Newport."

Morgan said the inmates also keep her coming back.

"I just feel like it's a good project," she said. "I've had a couple of inmates who have written and said we make them feel special, that we care about them. A lot of them don't have very many visitors and when we go it makes them feel good. I had one young man say it's the nicest thing he's ever had anyone do for him."

After each visit, the recordings are burned to CDs and each is paired with the correct book and packaged for shipping. The group spends about $300 to mail the books after each visit, or more than $1,200 each year.

The group talks with clubs and other organizations to solicit donations. Morgan said they also plan to apply for a grant to help pay for books and shipping costs.

"We can easily reach 600 children a year," Morgan said.

Oplinger said the group is always in need of volunteers, and donations are welcome. She said those who volunteer often find the experience meaningful.

"The volunteers are enthusiastic and energetic," she said. "Once you get inside the wall, it changes you as a volunteer."

Many volunteers have been with the program for years, Oplinger said, including their oldest volunteer, 92-year-old Lou Stephens.

"She still goes and records. She'll go as often as she can," Oplinger said.

As for Oplinger, she continues to go because she can see the results.

"It touches them on a psychological level," she said. "I've been asked a zillion times 'Why do you do this? Why do you come here?' And when they realize you are there because you want to be, that you value their willingness to keep in contact with the kids ... when you see the emotion in their faces, for those moments you've done your job and you've made the connection and they have accepted that connection. So maybe, when they go back out they will change what they need to change about themselves."

Information about the Storybook Project of Arkansas is available by calling Carolyn Morgan at (870) 257-3457 or by email at candcmorgan@outlook.com.