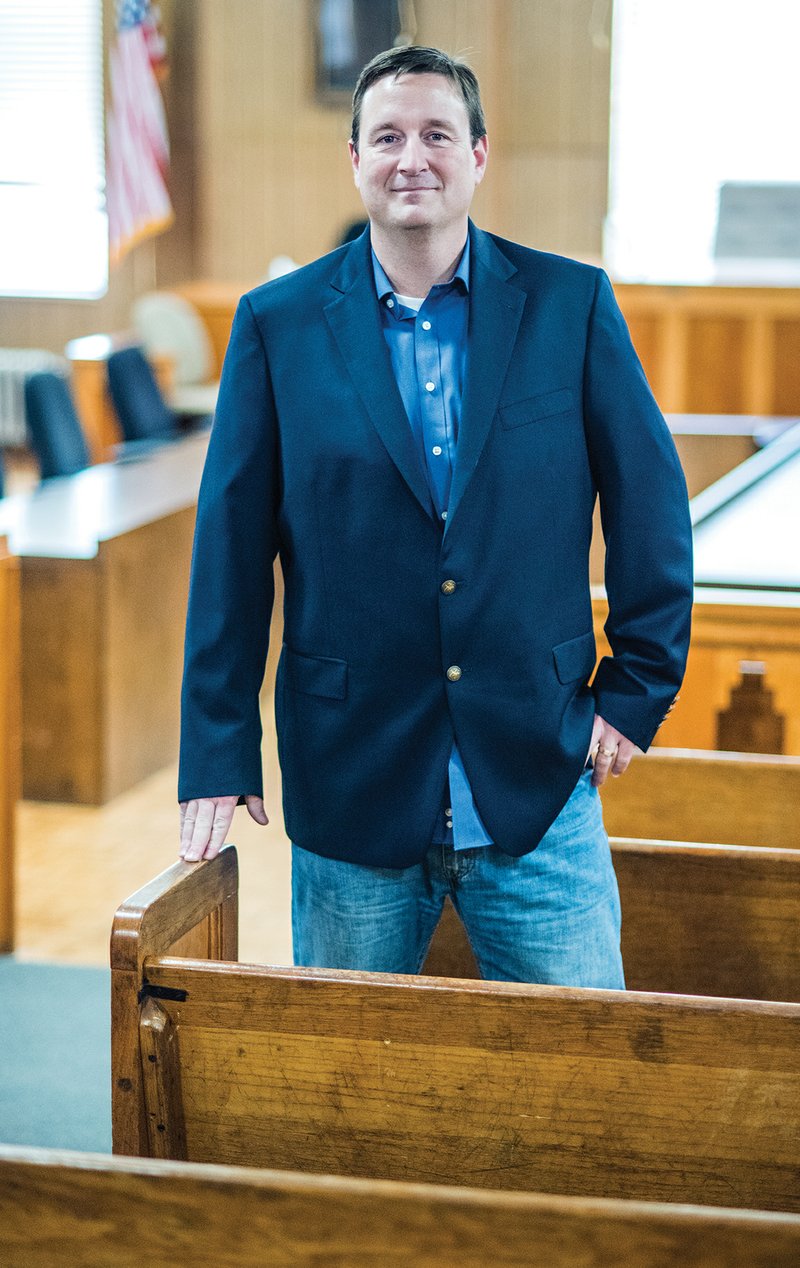 Izard County Judge Eric Smith presides over the Quorum Court meetings each month. He works with nine justices of the peace but has no vote, only the power of veto. ( William Harvey)

Eric Smith, 40, has had several careers, but he hopes to keep his current job for many years to come. He is the new Izard County judge.

Smith, who has been a business owner, chef, culinary-arts instructor and drywall installer, was elected county judge in the November 2016 general election.

“I was on the [Izard County] Quorum Court for eight years,” Smith said, noting how he first became involved in county government.

“I decided to run for county judge because I just didn’t like the way things were going. I heard a lot of complaints,” Smith said.

“I had not been on the Quorum Court for the past two years, but I had citizens throughout the county after me to run. They encouraged me to run. I ran against the [incumbent] judge. It was just the two of us in the race,” Smith said.

“I am a Republican; he was a Democrat. I won,” Smith said.

“I am one of the first Republican judges to be elected since 1890. My mother looked it up,” he said.

“My platform included getting the roads in better shape,” Smith said. “Roads are the main things people see.

“If the roads aren’t in good shape, people are not going to move into the county. When people move in, that creates jobs, openings for small businesses. We have to grow.”

“In the past, the county judges wanted to try to save the county money, but people wanted to see work being done. They wanted better management.”

Smith said he is working with prison officials at the North Central Unit of the Arkansas Department of Correction at Calico Rock to provide a workforce for the county.

“Free labor is a good thing,” he said. “All we have to do is feed the work crews. I hope we can get prisoner crews to pick up trash and cut the brush.”

Smith said he works closely with Doyle Cross, the road foreman. Smith also works with Sonia Blankenship, director of the Office of Emergency Management. Those two departments are under Smith’s purview as county judge. He also oversees the county courthouse building.

“I am working with the Arkansas Historic Preservation Program, trying to get a County Courthouse Restoration Grant to redo the courtroom, which has some water damage,” Smith said.

According to information found on the Arkansas Historic Preservation Program’s website, arkansaspreservation.com, the current courthouse was built from 1938-1940 and opened in 1940. The two-story building is cited as “architecturally and historically significant for its Art Deco style and association with a New Deal program, the National Youth Administration.” The National Park Service added the courthouse to the National Register of Historic Places on Sept. 30, 1993.

Smith was elected for a two-year term.

“I am planning to run again,” he said. “I hope to be here a long time. I’ve always liked serving the public. I like to listen to the public and be a good servant.

“I plan to be accessible and want to be transparent. The public needs to know what’s going on, where the county is spending its money.”

Smith said he has no aspirations to run for any higher office.

“My kids are still young enough that I need to stay around here,” he said. “I am not much of a public speaker. I like to talk, but not in front of big groups.”

One of Smith’s first duties as county judge was to establish committees for the Quorum Court — finance, public works and buildings, and public health, safety and human resources.

“The Quorum Court had not had committees in the past few years,” he said. “I reinstated them as a way to get more input from the justices of the peace.”

Smith presides over the Quorum Court but has no vote, except for a veto.

Smith said the Quorum Court meets at 6 p.m. the first Tuesday of the month in the courtroom.

“The public is always welcome,” he said.

“My philosophy as the county judge is to always have the county’s best interest in any decision I make,” he said. “I work for the county and its citizens.”

Smith was born in Calico Rock but “Melbourne has always been home,” he said.

He is a son of R.H. and Sandy Smith of Melbourne.

He has a brother, Mark Smith, and a sister, Cindy Finley, both of Melbourne.

“My dad was in the drywall business, and my mom was a secretary at the Farm Bureau. Both are now retired,” Eric Smith said.

“Working in the drywall business, I helped build homes. I’ve built three of my own,” he said.

“I’m a jack-of-all-trades … master of none,” Smith said, smiling.

Smith graduated from Melbourne High School in 1993 and studied culinary arts at Ozarka College in Melbourne, graduating in 1995 from the one-year program.

“I went into business for myself as owner of the Tally-Ho Restaurant, which was a private club,” he said. “I operated that for 10 years as chef and co-owner.

“Then I got out of the restaurant business for a while and worked with my dad in the family drywall business, which he had for 50 years,” Smith said. “I did that for about six years.

“Then I went back into the restaurant business and was a culinary-arts instructor at Ozarka College. I was teaching and running two restaurants at the same time — the Cooper’s Hawk Nest and the Hitchin’ Post. I did that for four years.

“That was a good thing. I like creating jobs. Many of my students worked for me, getting hands-on experience. I used my students as much as I could.”

Smith said a recruiter from St. Bernards Hospital in Jonesboro approached him about a job.

“They were looking for a chef. I served as the executive chef there for 3 1/2 years … driving back and forth to Jonesboro every day,” he said.

“I quit that to come here … to the Izard County Judge’s Office,” he said with a laugh.

“I was spending three hours a day in the car. I have three children. … I needed to be here at home with them,” Smith said.

“It was a good job,” he said of his position at the Jonesboro hospital. “We did the cooking for the patients and visitors. We also did all of the catering.”

Smith and his wife, Pattie, who is a graduate of Batesville High School and a registered nurse at White River Medical Center in Batesville, have three children — Hunter, 15, Erica, 13, and Bailey, 10. All attend Melbourne schools.