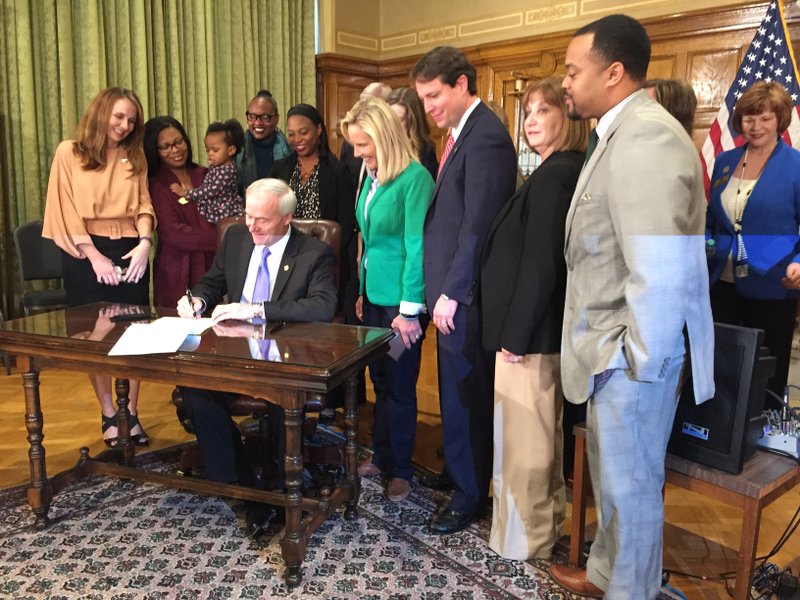 Flanked by expectant mothers and the sponsors of Senate Bill 125, Hutchinson signed what is now Act 182, which allows new mothers to dip into a pool of unused sick leave. It takes effect immediately.

The pool, the Catastrophic Sick Leave Bank, will be open to employees in all state agencies, and is made up of unused sick and leave time donated by other employees. It also is open to employees upon request for medical emergencies.

Previously, participating agencies operated their own pools, which were combined into a single pool with a balance of more than 1.5 million hours as of Thursday, according to a Department of Finance and Administration spokesman.

Act 182 requires all state agencies to participate in the new pool, and allows other governmental entities such as the General Assembly, Highway and Transportation Department, courts and higher-education institutions to opt in, or create their own banks.

"We fully stepped up to the plate and did something that should have been done years ago," said Rep. DeAnn Vaught, R-Horatio, the House sponsor of the bill. The Senate sponsor was Sen. Missy Irvin, R-Mountain View.

There are no projected direct costs to offering maternity leave through the bank because the donated hours are already calculated into the state budget, according to finance spokesman Jake Bleed.

In each of the past two years, more than 200 births were claimed on state insurance, according to the department. One accounting system covering most state agencies recorded 8,357 women between the ages of 18 and 45 working for the state.

Paid maternity leave had been available to some women working for the state before Thursday. Under a previous shared-leave program, workers in certain agencies could donate unused leave directly to a co-worker. Act 182 does away with that program.

Maternity leave for state employees is treated as any other leave for sickness or disability, meaning women must use up all of their accrued paid leave before going on unpaid maternity leave. However, Act 182 allows women to use donated leave from the bank before using their own accrued leave.

Parents are eligible for 12 weeks of unpaid leave under the federal Family and Medical Leave Act of 1993, signed by President Bill Clinton, the former Arkansas governor.

A woman would be eligible to receive donated maternity leave after she has worked for the state for a year, a public school district or college for two years, or a combination of state and public education work totaling a year.

"It shows that Arkansas is setting an example," Hutchinson said. "This is important for state government and our retention of employees, but also to make sure that we show the respect to those mothers that are trying to balance workforce obligations but also with the early days of childhood."

When she had her first child while on state payroll in 2014, Meg Mirivel, a spokesman for the Department of Health, said she took off for eight weeks. Now with her second child due in July, Mirivel stood behind the governor, and said afterward that she hoped to take two more weeks with her baby.

"Obviously, being from the Health Department, I'm a big proponent of breast-feeding," Mirivel said. "It's going to make a huge difference. ... It takes the pressure off worrying about the financial situation."

Democrats who have made efforts regarding paid maternity leave applauded the new law.

"I knew this day was coming, but just seeing it happen I'm actually more excited than I thought I was gonna be," said Rep. Clarke Tucker, D-Little Rock. "I think this is a great policy. I'd like to see us do more."