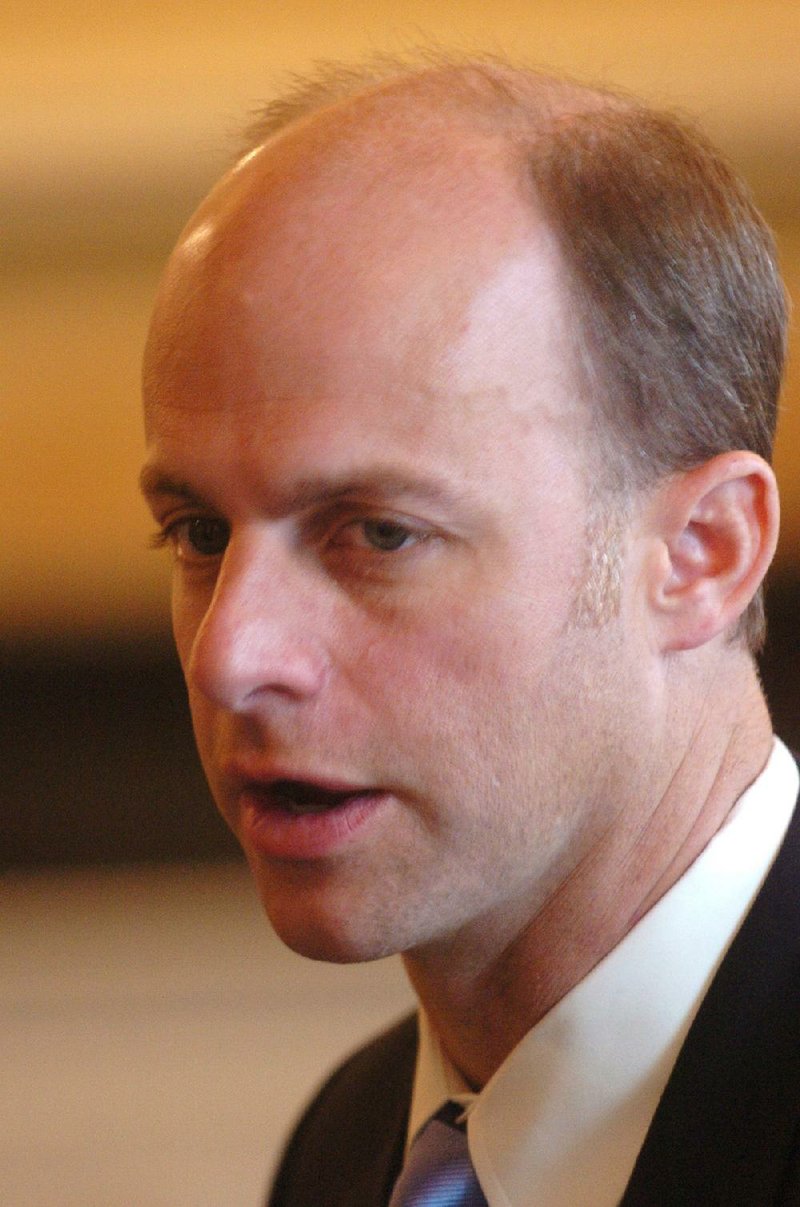 Files says they're not telling the truth.

The Fort Smith Republican says he wrote the quotes in December "after talking to each of the principals in the companies." He says he has call records and texts to prove it, but he didn't have them available to share with a reporter late last week.

The bids dispute is the latest question surrounding a $46,500 state-paid General Improvement Fund grant that Files acknowledges was his idea to pursue.

The purpose of the Fort Smith General Improvement Fund grant was to install water and sewer lines to help complete construction of a $1.6 million softball complex for the city of Fort Smith. The project was managed by a Files-operated company, River Valley Sports Complex.

Obtaining the grant involved a regional planning agency, the city and three required bids, according to interviews and records obtained by the Arkansas Democrat-Gazette.

After the planning agency awarded the grant to the city, more than $26,000 of it was paid to the low bidder -- Dianna Gonzalez of Pocola, Okla.

In an interview late last week, Files identified Gonzalez as a subcontractor who helped his company obtain work in the past. She is not an employee, he said.

Gonzalez could not be reached for comment and did not respond to a note left at her home. State records don't show a contractor's license or company listed in her name.

The dispute over who prepared the two bids led the city to stop three years of work on the ballpark project in the city's Chaffee Crossing development.

Files considered the ballpark "volunteer work" by his nonprofit company, he said.

But by the time the city canceled its contract with River Valley Sports on Feb. 7, it had paid the company $1.08 million, records show.

The project is unfinished, unusable and months behind schedule, city officials say.

The two contractors who say Files submitted bids in their companies' names told the Democrat-Gazette late last week that they knew nothing about those bids until Fort Smith city staff members began asking questions.

"The city came to me and showed me" the bid, said Osvaldo Ambriz, who operates Lego Construction LLC of Greenwood. "I said I never did it."

He said his company doesn't do utility work.

"My company does only framing work. We work with wood. Look at my license," said Ambriz, a carpentry, framing and cabinet contractor. "This guy is using my name without authorization."

In an email, electrical contractor Jason Williams of Williams Power & Lighting Inc. of Pocola said: "I was contacted by a lady from the City of Fort Smith about a quote that we never sent to them on that project."

Williams said the submitted quote looks nothing like what his company prepares.

"I believe there may have been something fishy going on out there," he said.

City directors and staff members had worried for months about the slow progress on the ball-field project, according to email records obtained by the newspaper. City officials confirmed the concerns in interviews.

Then in January, city staff members learned about what their attorney termed "irregularities" in the bidding process for the state grant.

To secure a grant of more than $10,000 and less than $50,000, state procurement laws require the submission of quotes, according to Sasha Grist, director of the agency that awarded the grant -- Western Arkansas Planning & Development District.

Those quotes should come from three different individuals or companies, Grist said.

Competitive, independent bidding is important, said Carl Circo, a professor at the University of Arkansas School of Law in Fayetteville.

"First, to assure the public that projects funded by public funds are awarded to the lowest responsible bidder. It's a matter of relying on competition to protect the public purse," Circo wrote in an email. "For this reason, the process is commonly referred to as competitive bidding."

Files, chairman of the Senate Revenue and Taxation Committee, says that, because he called the other contractors in advance, "I felt like they were competitive bids."

"I didn't put much more thought into it than that, though," he said.

The Arkansas Contractors Licensing Board doesn't list a Dianna Gonzalez as a licensed contractor; nor does it list a Dianna Shuffett, as a records search shows she is also known.

The two contractors who say they knew nothing of losing bids submitted in their companies' names are licensed in Arkansas and are listed on the secretary of state's website.

In an interview and in written responses, Files said Gonzalez has worked for another of his companies, FFH Construction LLC.

She "prepared flyers advertising FFH Construction in an effort to get further work. She has never been an employee, but has subcontracted work from FFH in the past," he wrote.

Asked if Gonzalez holds a contractor's license under any name, he replied, "Not that I know of."

Asked if such a license is required for the work she does, he wrote: "The state law is that contracts under $50,000 do NOT require a contractor's license."

When he learned that the General Improvement Fund grant would require three bids, Files said in an interview that Gonzalez had already submitted hers to his business partner Webb.

"I called the other guys," Files said of the other contractors, who say those calls never happened.

Files said he called the electrical contractor, Williams, because "laying the pipe was no different than laying electrical conduit."

He called the framing contractor, Ambriz, because "he does all kinds of stuff -- dry wall, painting."

Asked if he or Gonzalez will return the $26,945.91 wired to her bank on Dec. 30 from the state General Improvement Fund grant, Files wrote: "The money was not given to me. I will certainly assist in the return of any unused funds when asked to do so."

Files said he sees no conflict of interest or ethical concerns in preparing two of the bids, or in suggesting that the city apply for the General Improvement Fund grant, or in approving its award as a state senator, then seeing the grant go to a subcontractor for his own company.

"I don't see any conflict at all or ethical concerns, as we were just volunteers trying to build a sports complex at close to 20 percent of what it would have cost to bid one out and complete it," he wrote.

Files and Webb have said they would build most of the project with volunteer materials and labor, beyond the $1.6 million the city was to provide.

By all accounts, the idea of applying for the General Improvement Fund grant originated with Files.

The goal was to "jump-start" the lagging Chaffee Crossing ballpark project, according to city administrator Carl Geffken.

Files suggested that the city apply for the grant through the Western Arkansas Planning & Development District, he said. The city did.

Files also acknowledged that as a state senator, he gives his approval to the planning district to award grants in the Fort Smith area. The agency routinely checks with state legislators to get their approval before awarding General Improvement Fund grants in their districts.

The planning district approved the grant in mid-December, records show. The city signed an agreement with River Valley Sports to manage it..

But before the district would issue a check, district staff members told the city and Files, it needed three price quotes for the water and sewer line work, Grist said.

The telephone number on the Gonzalez bid has been disconnected. The address was listed as 14078 State Line Road in Pocola. But a W-9 IRS form for her, which Files says he filled out and signed for her because she didn't have a printer, listed the street address as 1407A.

After receiving the bids, the planning district issued a check for $46,500 to the city of Fort Smith on Dec. 30.

Gonzalez submitted an invoice to the city dated that same day for "mobilization, purchase of materials, layout and 50 percent total labor" totaling $26,945.91.

The city, under what officials say was urging from Files, wired the invoice amount that day to Gonzalez's bank account in Muskogee, Okla.

They couldn't find records for Gonzalez's company. And all three companies' bids used identical supporting quotes from the same supply company. The supplier quotes were more than 18 months old.

On Jan. 27, Geffken and another staff member met with Files. They asked him to have Gonzalez accompany him. She attended.

Attorney Michael Jones, hired by the city to look into the contract with River Valley Sports Complex, wrote a Jan. 31 letter saying "irregularities surrounding RVSC actions in procuring bids" could violate "laws or regulations of any public body having jurisdiction."

Because of the bidding and other concerns, Jones said the city was within its rights to terminate the contract with River Valley Sports Complex.