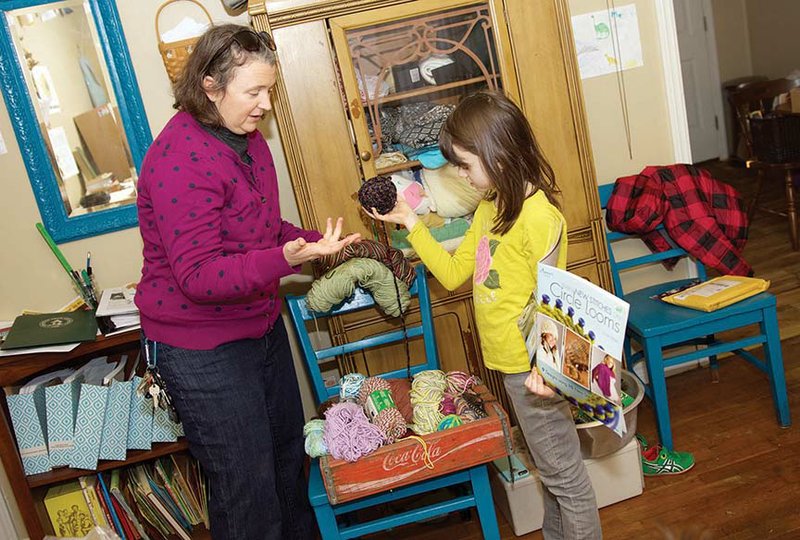 Samantha Dill, a founding board member, and her daughter Eliza, 8, of Danville pick out yarn for Eliza to use making a hat at McElroy House, a nonprofit community resource center in Dardanelle. Knitting and crocheting are offered from 2-4 p.m. each Sunday, and other activities at the home include special speakers, a community garden and a cloth-diaper bank.

When Meredith Martin-Moats was growing up in Dardanelle, she said, her grandparents Lloyd and Golda McElroy always invited neighbors into their living room to talk about whatever was going on.

“My grandparents were just such loving people. I learned so much about compassion and hospitality and what it means to be a good neighbor,” Martin-Moats said.

That welcoming feeling was what she envisioned when she and friends established McElroy House, an organization of cultural resources, in her grandparents’ former 1950s-era home at 402 S. Second St.

From poetry and pie-making to crocheting and conversations, the goal is to bring together residents in Pope and Yell counties to improve their communities and bridge divides, Martin-Moats said.

It’s about social justice and the environment. It’s history. It’s the future. And a recent $5,000 grant will bring in more arts to be integrated into programming.

It’s been a long road to get to this place for Martin-Moats, 39, who has 7-year-old twins and a 2-year-old.

She was poking around the house in 2008, which her father inherited after her grandparents’ death in the early 1990s, and she noticed the irises starting to emerge under a blanket of leaves.

“I remembered those — we’d always stand in front of the irises to get our pictures made,” she said. Her grandparents died in 1992 and 1993, yet the irises still thrived. “I said, ‘Wow.’ I had a moment where I thought, ‘I can do something here; I could give this house back to the community.’”

Martin-Moats described it as “knitting needles in my head,” and she began to put together a plan.

Before the irises got her attention, she was in the folk studies program at Western Kentucky University and became friends with a man who refurbished old homes that were scheduled for demolition and turned them into museums or public-research centers.

“I was really inspired by the work he did,” she said. “I knew I always wanted to come back home and do stuff to help people connect across generations.”

It wasn’t as easy as just opening the doors to her grandparents’ home. She had to go to the Dardanelle City Council to get the house rezoned; she had to add a couple of parking spaces.

“A lot of people credit me with being the founder, … but this has been shaped by a lot of different minds, definitely not just mine,” she said.

“We wouldn’t be anywhere without her,” Martin-Moats said.

Williams, 27, a mother of two, said she took a folklore class that Martin-Moats was teaching at Arkansas Tech University in Russellville. Martin-Moats talked to Williams about the idea for McElroy House. Williams is working on her doctorate in American history at the University of Arkansas at Fayetteville and teaching this semester at University of the Ozarks in Clarksville.

“We started with the garden book. We started collecting oral history of gardeners in Pope and Yell counties, and we published those online,” Williams said. The McElroy House has a perennial-flower garden, as well as raised vegetable beds.

The pair talked about community workshops they’d like to host at the house, but that took money.

In 2014, the fledgling nonprofit had its first major fundraiser, the Harvest Run.

The living room is furnished with a hodgepodge of furniture and a sewing machine that belonged to Martin-Moats’ great-grandmother.

The programs are varied and evolving. Most recently, McElroy House received a $5,000 Alternate Roots grant to fund art.

According to its mission statement, Alternate Roots “supports the creation and presentation of original art that is rooted in communities of place, tradition or spirit. We are a group of artists and cultural organizers based in the South creating a better world together. As Alternate Roots, we call for social and economic justice and are working to dismantle all forms of oppression — everywhere.”

The money will be used for things like buying yarn and other art supplies, as well as paying stipends for professional speakers, the women said.

At least once a month, a skill-share is held, where people come and share a skill or talent. A calendar of events is available on the organization’s website, mcelroyhouse.wordpress.com.

”We try to always have it led by somebody in the community,” Martin-Moats said. “It’s always laid-back: ‘Here, I’ll show you how to knit.’ There are people there who crochet and want to learn to knit and vice versa,” she said.

A knitting and crocheting class is held from 2-4 p.m. each Sunday.

“We want to think about art that is not just this thing that happens outside of our everyday lives, but who we are as people,” Martin-Moats said. “It’s rethinking what art even means. Knitting is definitely part of that; it’s a long history of people getting together and working on textiles.”

Founding board member Samantha Dill of Danville teaches at Danville Middle School. She praised the cross-generational focus of McElroy House.

She said a 9-year-old was at the house one Sunday learning to knit alongside a 60-year-old woman. Boys participated, too, and excelled at it, she said.

Dill, 41, is in charge of the cloth-diaper bank, which is free. “You check out a batch of cloth diapers, get assistance in using them, and can be assigned a mentor,” she said.

“What attracted me to the organization was bringing folks together around various interests and seeing what else grows out of that and giving them room to do that,” she said.

Dill said the idea is not just to create programming, but to listen to what residents of the area want and allow them to use the space.

“I came last summer, and I said, ‘You know, we need art … to try to weave more people together,’” she said.

That’s when professional artist Jeannie Stone of Russellville got involved. Stone and Dill connected on Facebook.

Stone, who is half Hispanic, is a doctoral student at the University of Central Arkansas in Conway and started the nonprofit organization Traveling Arts Fiesta. She is also a poet.

“The thing is, like Meredith, I have been a community activist, just a worker, for a long, long time,” Stone said.

“My goal is always … to promote a little bit more understanding,” she said. “The only way we’re going to be able to do that is by face-to-face encounters. I believe art is a nonthreatening path to a social discourse we need to go through. The only way to get us on the same page to start talking is through the arts. That’s where we feel free to express ourselves. Wherever you have art, … those are safe places, where it’s safe to fail.”

She will lead a pottery workshop this summer for McElroy House, where participants will gather clay from the river, sift through it and talk about the kind of vessels Native Americans would have made. In a day camp, artists will take their supplies into the neighborhood and sketch, “centered on locations that already have stories that we can talk about when we’re there,” Stone said.

Martin-Moats said that in addition to Stone’s expertise as a painter, the focus will be on “the art of the everyday,” such as pie-making and knitting.

“Art is so great at being a process where people can really envision a better future,” Martin-Moats said.

The women all have their own ideas about the future of McElroy House.

Martin-Moats said that although money is always nice, she wants to see more members. People can drop by McElroy House and, if the “Open” sign is lit up, they can come inside to participate in an activity, borrow a book from the library or just talk about what is on their minds. A bilingual library is being built with part of the grant, too, she said.

Dill said her vision for McElroy House is for it to be “a place of community. I want to build that and to see that, but I also want it to serve as a voice for maybe those who don’t feel like they have a voice, or that they don’t have anyone listening to their voice.”

She said Danville native Stephen Coger, a Springdale attorney, is scheduled to come to McElroy House in March for a question-and-answer session on immigration.

The current political climate in America was mentioned by each woman.

She said the women believe in asking themselves what the problems in the community are and talking about solutions — “not Band-Aids, but real solutions,” she said. “We can’t fix it all. This is long-haul work; we know we’re not going to fix problems tomorrow.

“When we come together and talk about experiences … and move past all this headline-type coverage where we want to get angry and kind of say, ‘What’s your story? Where did you come from? What matters to you? What kind of world do you want your kids to live in?’ — I think that’s where we get to real solutions.”

And sometimes that happens when people are just invited into a living room.