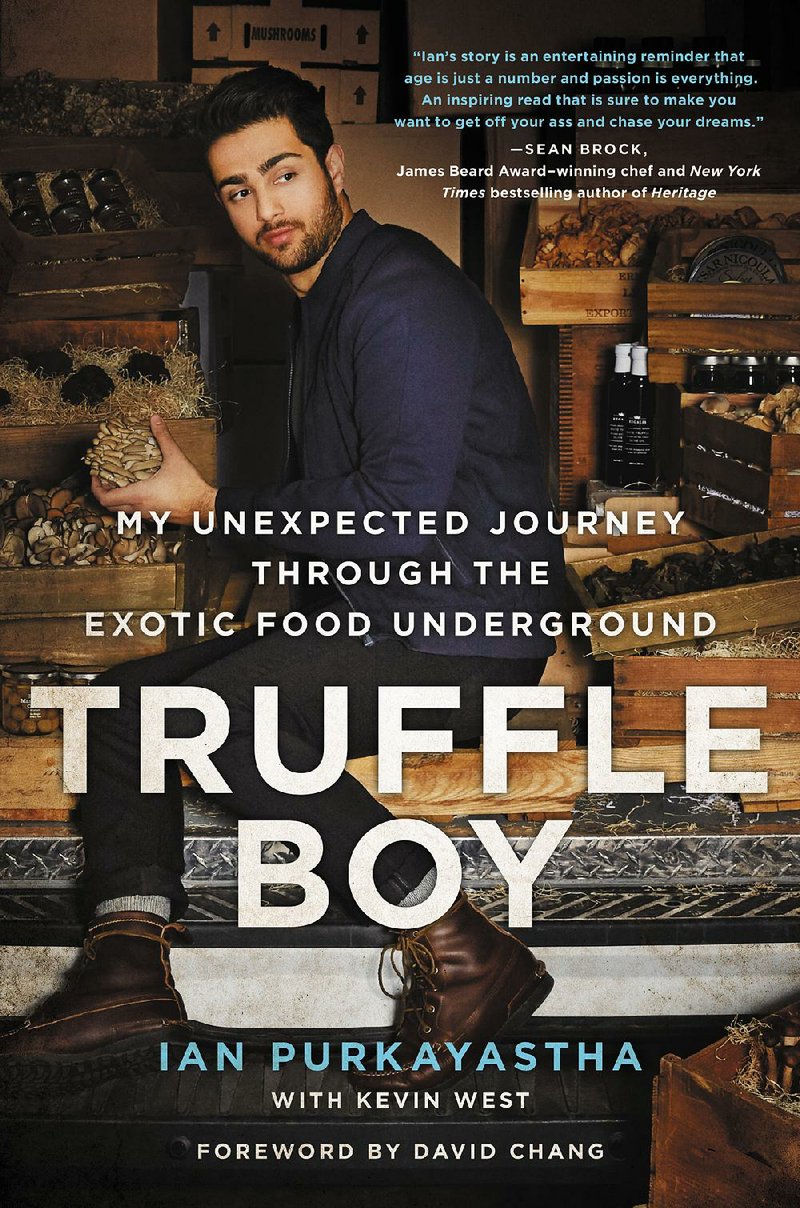 In the forests of Northwest Arkansas, a teenage Ian Purkayastha first discovered his passion for mushrooms and rare, wild foods.

Today the 24-year-old lives in Manhattan and is on track to sell $8 million worth of truffles, mushrooms and other exotic foods like caviar, wild greens and live seafood in 2017.

Back in his midteens, Purkayastha and his family had just moved to Arkansas from Houston as his parents sought a simpler life amid the recession. His uncle, Jared Pebworth, an archaeologist with the Arkansas Archeological Survey, had been living in Fayetteville and taught his nephew to forage for mushrooms around a family cabin in Huntsville and all over the Ozarks, near Harrison, Goshen and even at Finger Park in Fayetteville.

Purkayastha dug into researching edible mushrooms and ultimately became fixated on the truffle after tasting the rare, expensive delicacy for the first time on a trip back to Houston. It was a meal that would shift the trajectory of his life.

"When he gets into something, he's very focused. He's always had this ability to take something he's learned and take it a little bit further," Pebworth said. "I never doubted that whatever he did he would take it to the next level."

After saving up gift money, the 15-year-old found a French truffle supplier and ordered his first kilogram, intending to re-create that first truffle dish. He quickly realized a kilo was too much, so he put the best two truffles in his refrigerator, and his dad drove him to downtown Fayetteville to try to sell the rest to Ella's, Theo's and Bordinos restaurants.

That inaugural $260 sale launched Purkayastha's first company, Tartufi Unlimited. The staff at the Washington County Courthouse had to check with a supervisor because they had never seen someone so young apply for a tax ID number to legally sell wholesale products.

By the end of high school, the prospects of his truffle distribution business outweighed the appeal of college. Even though he had won an entrepreneurship scholarship, "I convinced my parents to let me move to New York, defer college and pursue this dream of selling truffles and mushrooms. I've been very lucky to have such supportive parents who have let me take this different path to education," he said.

His parents, Lisa and Abhijeet Purkayastha , are longtime entrepreneurs (they operate Khana Indian Grill in Fayetteville) and championed their son's dream despite his setbacks, including when he was beaten and robbed on his third day in the city.

"I think any other parent would have made me come home right away, but they were supportive and encouraging," he recalled. "That has really been the success in this whole thing: having a strong foundation in my parents and a strong support system. Without that it would have been impossible to achieve any of this."

Pursuing his dream to "make it big in New York" came with even more challenges. Purkayastha was only paid commission by the Italian distribution company he sold for. He lived in a bad part of Newark, N.J., his office was above a methadone clinic without air conditioning and he had to "fight for every order," initially facing a lot of rejection. Eventually though, his persistence, reliability and the high quality of his truffles won over some of New York's best chefs.

"I assumed that if I continued pushing through and continued to hustle that I would become successful someday," he said. "It obviously took a long time, but it got to a point where people started reordering truffles and started trusting me. The cold calls turned into restaurants calling me wanting to do business with me."

In the six years since, Purkayastha has learned a lifetime of business lessons. He has had suppliers swindle him and undergone many logistical nightmares, from a shipment getting incinerated at customs because of suspected bug infestation to having a car towed, full of truffles to be delivered. He had to include money for parking tickets in his budget and ended up parting ways with the Italian distribution company as well as his original Regalis Foods business partners once he realized they were undervaluing him.

Today, he says things are finally stable. Before, Purkayastha recalled living a lonely life "in a depressive state, working myself to death, 18-hour days, six days a week," but now he has seven employees and four delivery trucks. He lives on the Upper West Side with a second home in western Massachusetts.

While he estimates he is the third largest supplier in the country, "there is endless competition," he said. "Every year is harder and harder" as more people try to break into the lucrative market.

"We're constantly trying to find that next big thing," he said.

Over the years he has gotten threats, had his tires slashed and had competitors approach him to price fix the market. Truffle smuggling is also a problem, he said, given the ease with which someone can slip some truffles in a suitcase.

Regalis' competitive edge, according to Purkayastha, came from several directions. First, he said, he has always been militant about the quality of his products. "Everyone assumes that because they're very expensive, these products will automatically be high quality. That's just not the case."

He sells an ounce of Italian white truffles for $230 while French Perigord black truffles are $65 an ounce.

"We have to literally inspect every single truffle that arrives," he said.

Additionally, thanks to some excellent timing, he was on the cutting edge of the recent foraging movement among high-end restaurants.

"I started foraging when it wasn't hip and fashionable with my Uncle Jared in the Ozarks," he said, explaining that Regalis, founded in 2012, differentiated itself with its variety of foraged products.

"I got into these kitchens not with the truffles but with these other foraged, wild plants and mushrooms. The truffle business was kind of a trickle-down," he said.

Ultimately though, Purkayastha's identity has become enmeshed with those truffles. He called his memoir Truffle Boy, after all.

While he says he definitely does not eat truffles every day, and some days he feels "smothered" by their powerful smell, "I still love truffles. I still get excited when we get a new shipment."

"I tell people all the time truffles are the last natural ingredient left on earth. Nothing else is almost exclusively wild."

Truffles have not been commercially produced on a large scale, adding to their cachet and expense.

Back in his teens, Purkayastha had an idea for his Fayetteville neighbor and general surgeon, Wayne Hudec. "He came to me very professional-like and said, 'Dr. Hudec, I have a business proposal for you,'" Hudec recalled.

Purkayastha suggested that his neighbor invest in trying to grow truffles at his farm, Hazel Valley Ranch, that Purkayastha could later distribute, with an equal profit split. They shook hands on it.

It has been six years, so Hudec and Purkayastha suspect they have some truffles under hazelnut trees by now. They are looking for a truffle-sniffing dog to locate their underground harvest.

"He's gotten a different kind of higher education in the world of unique foods," Hudec said. "He's just grown by leaps and bounds. For him to be a success at his age, I'm just proud as hell."

Purkayastha never made it to college. He ended up returning his scholarship money when it became clear scheduling wouldn't work.

His rejection of the "traditional" educational path to success had an effect on his former creative writing teacher at Fayetteville High School, Boyd Logan.

Last year, Logan founded the Future School charter high school in Fort Smith with the goal of cultivating students' extracurricular and professional passions. Each week students spend a day at internships wherever they choose.

"Ian was the turning point," he said. "I realized that at school we were cutting kids capable of all this crazy stuff off from those passions. Ian would leave and do what he was most passionate about after school, versus us cultivating that passion at school."

However, he's proceeding cautiously. Given the trust each of his transactions require, his profit is rooted in relationships, which makes expansion tricky.

"The success of the business is the personal relationships with the chefs. You lose that the larger you get. I'm walking this fine line between wanting to scale up and putting the brakes on, because I don't want to lose track of what has made me successful."

He still forages whenever he has a chance at his property in Massachusetts and with his uncle in Arkansas. "Wherever we go, it turns into foraging," P̶e̶m̶b̶r̶o̶k̶e̶ Pebworth* said.

"I'm glad Ian was paying attention," he said of those first foraging trips in the Ozarks. "I like the fact that in such a modern world, he's bringing a little bit of nature to the city."

*CORRECTION: Ian Purkayastha’s uncle’s name is Jared Pebworth. His last name was incorrect in a previous version of this article.