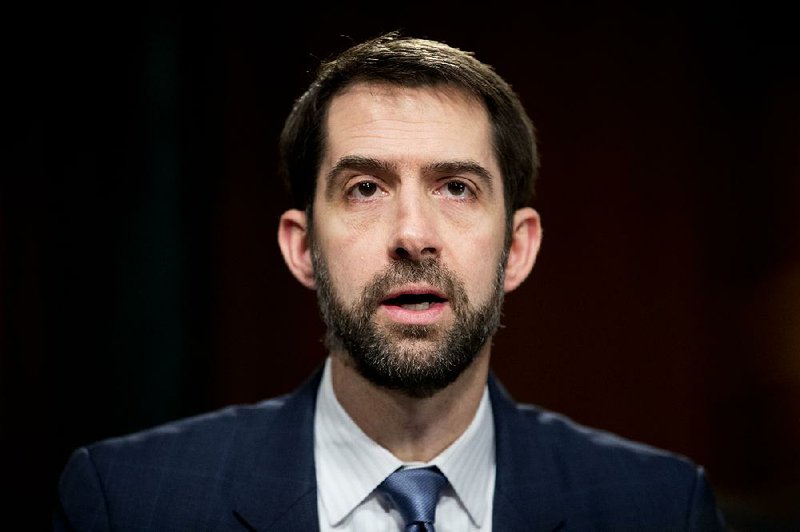 After his Northwest Arkansas office was picketed early this month, Cotton promised that he would meet during Congress' Washington's Birthday recess with Ozark Indivisible activists who oppose President Donald Trump.

But the Republican from Dardanelle had struggled to line up a large enough venue for the meeting.

Last week, Cotton said the event would take place at the Jones Center in Springdale. But on Sunday night, Cotton tweeted that the event was being moved to the Arend Arts Center at Bentonville High School.

On his Facebook page, Cotton said the location had been changed "to accommodate as many Arkansans as possible."

On Monday, Bentonville School District officials backed away, saying the "tentatively scheduled" event would not take place there "due to insufficient time to make arrangements for the visit."

"It is the responsibility of Bentonville Public Schools to ensure the safety of students, staff, families, and visitors when in District facilities," the district said in a press release. "After consulting with law enforcement, we determined that we would not be able to safely accommodate the number of people expected at this event and informed Senator Cotton's office today."

In an interview, Bentonville district spokesman Paul Stolt said Cotton's office had been in contact with the district but "there hadn't been any paperwork filled out, that I know of, to rent the facility."

"With a couple of days [to prepare], we just weren't going to be able to put everything in place to handle the numbers that were planning on attending," Stolt said.

Hours after Bentonville announced its decision, Cotton said in a press release that the meeting would be moved to Springdale and would still take place from 5-6:30 p.m. It couldn't be determined Monday evening how many people the performing arts center on the Springdale campus can accommodate.

"I look forward to welcoming Arkansans at Wednesday's town hall at the Pat Walker Performing Arts Center on the Campus of Springdale High School [101 S. Pleasant St.] and I appreciate your patience as we've changed venues over the past few days," Cotton said. "On Sunday evening, the Bentonville school board approved the use of the Arend Arts Center, but they withdrew their offer after the Bentonville police chief expressed concerns over security. I'm grateful the Springdale School Board has made their larger facility available, and I want to encourage as many Arkansans as possible to come to what should be an engaging and informative event."

"No firearms, large bags or backpacks, food, or drink, will be permitted in the Pat Walker Performing Arts Center," the press release added.

Caitlynn Moses of Ozark Indivisible, the group pushing for the meeting, welcomed news that a meeting location has been found.

"I"m just glad to have a solid venue, a real space," she said. "Hopefully, this hasn't messed with people too much and they'll still come."