Injuries piling up in league 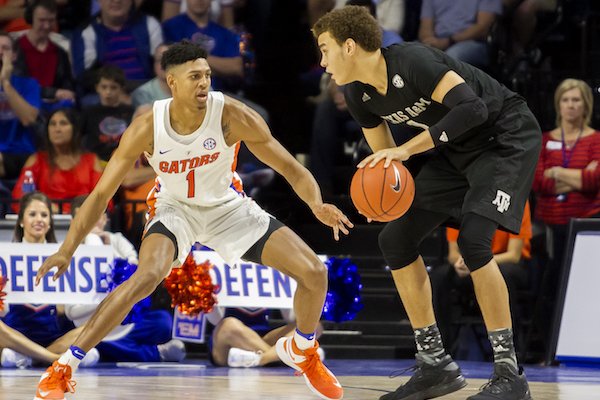 FAYETTEVILLE -- Three of Arkansas' final four SEC opponents have very recently lost key starters, beginning with Texas A&M, which takes on the Razorbacks on Wednesday at 7:30 p.m. at Walton Arena.

The Aggies will be playing their third game without sophomore guard DJ Hogg, who was ruled out for the rest of the season Thursday because of a lingering foot injury.

Hogg ranked third on the team in both scoring (12.0 points per game) and rebounding (5.1).

According to a statement from the school, after consultation with the Texas A&M medical staff and Hogg's family, he had decided to concentrate on rehabilitation and is out for the year.

"Losing DJ Hogg was a blow," Aggies Coach Billy Kennedy said. "He had come back and he was getting better.

"Not having him ... really limited us even more so on the perimeter."

Additionally, Florida center John Egbunu suffered a knee injury at Auburn last Tuesday that will knock him out for the season. Georgia forward Yante Maten had a significant ankle injury in the early going Saturday against Kentucky and is out indefinitely.

The Razorbacks, facing Vanderbilt without its leading scorer in a recent game, did not fare well. The Commodores downed Arkansas 72-59 on Feb. 7 without guard Matthew Fisher-Davis, who is averaging 15.3 points per game.

Georgia forward Yante Maten, who went down with a sprained right knee 95 seconds into the Bulldogs' 82-77 home loss to Kentucky on Saturday, probably won't return in the regular season.

Maten ranked third in the SEC in scoring (18.7 points per game) and eighth in rebounding (6.9 per game) before his injury, which came after Kentucky's Isaiah Briscoe scored on a layup and fell back into Maten's leg.

Georgia Coach Mark Fox said there was not a timetable for Maten's return.

"It's a very significant sprain," Fox said. "It's a serious injury and I don't think our medical people or myself have any expectation of Yante returning during the regular season. The odds of that are very, very slim."

Florida lost center John Egbunu for the rest of the season with a torn left knee ligament during its 114-95 victory at Auburn last Tuesday.

Egbunu, a 6-11 junior from Bauchi, Nigeria, was averaging 7.8 points and a team-high 6.6 rebounds per game.

Sophomore Kevarrius Hayes, whose playing time stands to increase the most with Egbunu out, had 9 points, 10 rebounds and 4 blocked shots in the Gators' 57-52 victory over Mississippi State on Saturday.

"He played great the other day, played as well as anybody on our team," Florida Coach Mike White said.

White ran through a list of Florida's injuries during his stint on Monday's SEC coaches teleconference, including guard Canyon Barry (ankle) and forward Keith Stone (virus).

"We're very banged up right now," White said, adding that Barry would be a game-time decision Tuesday against South Carolina.

Things are looking up for NCAA Tournament projections for the SEC and Arkansas compared to this time last week.

ESPN.com's Joe Lunardi projects Arkansas as a No. 9 seed and the fourth SEC team in the NCAA field, joining No. 3 seeds Florida and Kentucky and No. 7 seed South Carolina. Lunardi lists Tennessee as one of his first four teams out of the field.

CBSSports.com's Jerry Palm is even more generous, including Alabama as one of his last four in as a No. 11 seed, joining Arkansas (11 seed), Florida (3), Kentucky (3) and South Carolina (8). Palm also lists Ole Miss as one of his first four out.

South Carolina Coach Frank Martin is a strident voice for the SEC, and he said he thinks the league is on the brink of good things.

"I think this league is starting to make a move in an unbelievable direction," Martin said. "I think the days of us having three teams in the tournament and all this other stuff is behind us."

Calipari said Fox and the Bulldogs should have won overtime road games at Florida and Kentucky, as well as a controversial game at Texas A&M.

"We were lucky to win," Calipari said. "Then he loses at Texas A&M because the clock stalled. The clock stalled, that's why he loses the game. But he keeps his team together. That's coaching."

Calipari broadened his scope, in reference to Gottfried, who is staying with the Wolf Pack through the end of the season.

"Every coach in the country, put it in your contract," he said, heavily emphasizing the final five words while staring into the cameras. "What if Mark Gottfried goes on a run at the end and gets to the NCAA Tournament, which he was in four out of five years?"

Georgia Coach Mark Fox said he appreciated the support he received from Calipari.

"Someone said that John said some things after the game, which I certainly appreciate and respect," Fox said. "John's not a young guy. He's been around the block a few times, so I think he probably has a pretty good perception of the national landscape.

South Carolina has lost three of its past four games, including home games against Alabama and Arkansas, after the Gamecocks had climbed to the top of the SEC and into the top 25 of the national polls and the ratings percentage index.

Coach Frank Martin said his team is learning to adjust to being one of the hunted.

"Those teams are lining up, and they know because of what our guys have done, if they can beat us, that makes them credible," Martin said.

"Yeah, it's a different time for the guys in our locker room. That's part of the continued growth."

Macon was the SEC player of the week after he averaged 21.5 points per game in victories over South Carolina and Ole Miss, including a career-high 30 in a 98-80 victory over the Rebels on Saturday.

Williams, a 6-9 forward, was named SEC freshman of the week after averaging 13 points, 11 rebounds, 4 blocks and 2.5 assists in games against Vanderbilt and Auburn.

The SEC Network broadcast team talked up Vanderbilt's possibility of landing an at-large bid for the NCAA Tournament, even though the Commodores are not projected to make the field by most national media analysts.

"Our strength of schedule is at the top," Vanderbilt Coach Bryce Drew said. "We've been 1, 2 or 3 most of the year and our schedule coming up is tough, so it should go up. ... That's why we still feel we have a lot to play for."

Alabama guard Avery Johnson Jr. will make his first return to Texas A&M's Reed Arena on Saturday. Johnson, a former Aggie player, transferred to Alabama after the 2014-2015 season to play for his father.

Avery Johnson said Texas A&M Coach Billy Kennedy is a very close friend, and that his son stays in touch every week with some of the Aggies, including Tyler Davis.

• Mississippi State has lost eight of its past 10 games

• Georgia announced it will install new video boards and a new scoreboard over center court at Stegeman Coliseum for next season.