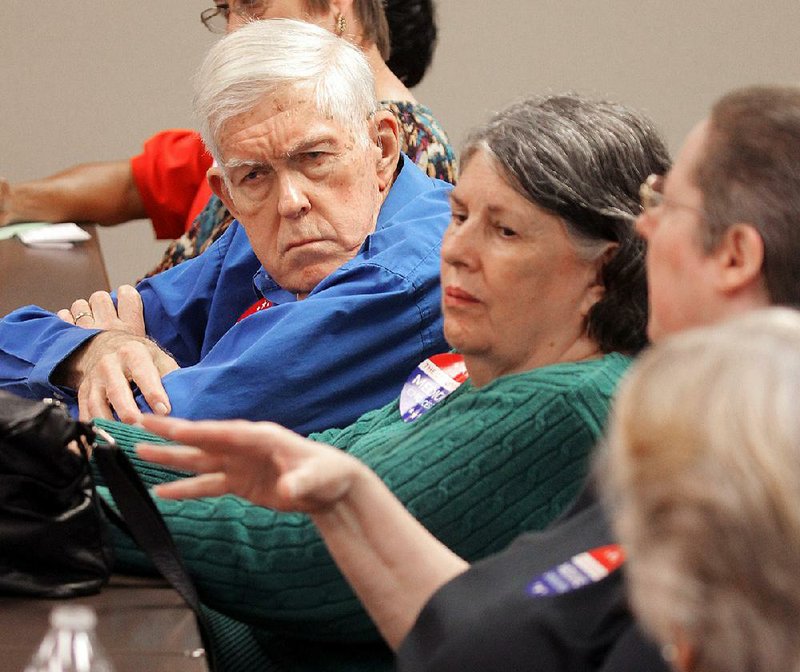 Medicare Advantage recipients Raymond Tromater (left) and his wife, Rebeccah (center), participate in a roundtable discussion about the federal Medicare Advantage program during an event with Sen. Tom Cotton and The Coalition for Medicare Choices at CareLink in North Little Rock. ( Benjamin Krain)

A group of Arkansas senior citizens told U.S. Sen. Tom Cotton on Tuesday that they like their Medicare Advantage plans, but a few expressed concerns about higher spending caps and rising medication costs.

Cotton, a Republican from Dardanelle, told the group that he supports the federally-funded program and will defend it on Capitol Hill. Nonetheless, the overall health care system needs changes, he said, promising to work to improve it.

More than a dozen people participated in the North Little Rock round-table discussion, which was organized by the Coalition for Medicare Choices, a group that was founded by the insurance industry's leading trade association: America's Health Insurance Plans.

In 2014, Medicare paid $160 billion to Medicare Advantage organizations, according to the Government Accountability Office, the agency that performs audits and investigations for Congress.

Nationwide, more than 17 million Americans have signed up for Medicare Advantage, including more than 132,000 Arkansans.

Medicare Advantage plans have caps on the out-of-pocket expenses that enrollees are required to pay, according to Medicare.gov.

Critics, who say Medicare Advantage has driven up the cost of health care, have questioned its funding levels and challenged some of the companies' billing methods, but the companies have defended their business practices.

The program has strong support from a bipartisan majority in the Senate.

Cotton and more than 60 other U.S. senators, including Republican John Boozman of Rogers, signed a letter to the acting administrator of the Centers for Medicare and Medicaid Services last week calling for funding to continue.

"Any cuts that may be proposed this year would have the potential to stifle innovation and impede beneficiary access to high quality health care," the Feb. 16 letter stated.

When medication prices spike, the Conway man said he's forced to make tough choices at times. "Being on a limited income, I'm almost to the point where I'm not able to afford it. ... I either eat or I get my medicine," he said.

But he said he can afford to see a physician now, thanks to Medicare Advantage.

Judy Urich, 80, gave her Medicare Advantage plan high marks. "I've been really happy with it. ... I really like it," she said.

But the Little Rock woman expressed concern that rising out-of-pocket expenses would be a hardship for other senior citizens.

Cotton, who spoke with the group for more than a half-hour, asked questions and expressed sympathy.

After hearing about the high cost of dental implants, Cotton said, "It's hard to do much if you have dental pain."

"We've got a lot of problems. Those problems predate Obamacare," Cotton said. "It costs too much. It's hard to find doctors. It's hard to get appointments."

He promised he'd take their concerns back to Washington next week.

"I thought the comments from the audience were terrific. I thought they were very heartfelt and honest and spot on," she said.