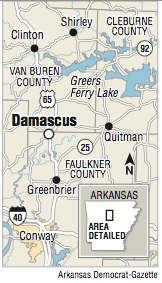 CONWAY -- The city of Damascus "abused its police power" and violated the state's speed-trap law, a prosecutor found Wednesday.

Damascus, which has about 385 residents, is in Faulkner and Van Buren counties and is home to a stretch of U.S. 65, a major traffic route for people traveling between Conway and Branson, Clinton or Greers Ferry Lake.

Prosecuting Attorney Cody Hiland based his decision on an investigation by the Arkansas State Police and the Arkansas Legislative Audit Division. The city has 30 days to respond to his finding. Hiland delayed making a decision on sanctions until after that 30-day period.

"This was a narrowly tailored, data-driven investigation and finding," Hiland said in a statement Wednesday.

Damascus' city attorney, Beau Wilcox, said the city would respond "after giving due consideration to all the options it may have."

"It remains very likely that the City of Damascus, through the mayor and city council, will find it both legally advisable and prudent to challenge the constitutional merits of the statute in a court of law," Wilcox said in an email.

"In short, there is a fundamental lack of due process afforded the city by way of the statute, and there are vague, ambiguous, and arbitrary components of the statute that also make it worthy of judicial review," Wilcox said.

A city is in violation of Arkansas Code Annotated 12-8-401 through 403 if its revenue from traffic fines and costs related to its local traffic citations exceeds 30 percent of the town's total expenses, less capital expenses and debt service, in the preceding year; or if more than 50 percent of local misdemeanor tickets issued on a state highway are for people driving 10 mph or less too fast.

In his findings, Hiland said the state police and the Legislative Audit Division had examined the Damascus data three ways and for two time periods, 2013-14 and 2014-15. All three methods found that the citations had exceeded the 30 percent threshold. The investigation also looked at the statistics with and without the town's water department expenditures, since that agency is a business-type activity. The city still exceeded the 30 percent threshold.

The city's revenue from traffic fines and costs above the 30 percent level ranged from a low of $77,836 to a high of $298,449, depending on the year examined and the method of analysis, according to Hiland's report.

"They failed all different scenarios in two different time periods and failed significantly," Hiland said in an interview.

"As a result, the city is presumed by the statute to have abused its police power and is a speed trap," he said later.

Wilcox said the city's posted speed limits on U.S. 65 "are very clearly marked at both the northern and southern boundaries of the community." The highway's 65 mph limit drops to 45 mph through the main part of Damascus.

Wilcox said the 45 mph limit "within the city limits is inherently reasonable."

"If the city's police powers are limited or removed in some fashion due to a rather arbitrary and arcane statute, then residents of Damascus and motorists could well suffer," he said.

Wilcox has previously said that "virtually no citations for speeding are written unless the motorist" is going at least 15 mph over the 45-mph limit. "Even then, we strongly consider the motorist's driving record," he has said.

Van Buren County resident Michael Acton of Scotland said Wednesday that he drives on U.S. 65 through Damascus when he travels to Conway to shop.

Acton said he hasn't been ticketed in Damascus but is careful to drive no faster than the speed limit there.

"I usually set my cruise control at 45 because I'm aware if you're speeding, they're going to give you a ticket there," he said.

Acton said he always sees a patrol car that appears to be checking motorists' speeds in Damascus.

Asked if he thought he could drive 5 or 10 mph over the limit and not get ticketed there, Acton said: "I don't think you could do that in Damascus. I think you'd get pulled over, but I can't say that for sure."

"I think they should be more lenient," he said.