UA bench not taking back seat 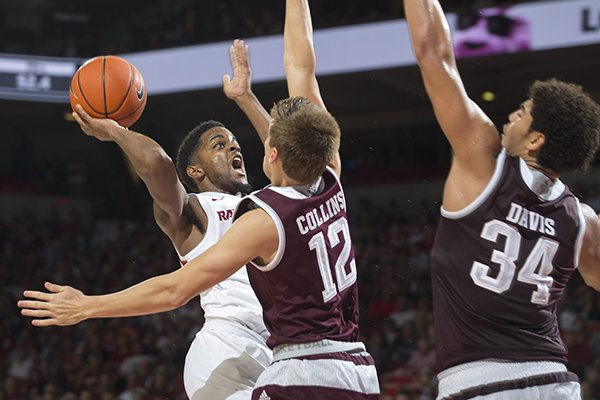 Arkansas guard Daryl Macon (4) gets off a shot over the defense of Texas A&M guard Chris Collins (12) and center Tyler Davis (34) on Wednesday, Feb. 22, 2017, at Bud Walton Arena in Fayetteville.

FAYETTEVILLE -- Another dominating bench performance propelled Arkansas to an 86-77 victory over Texas A&M on Wednesday night at Walton Arena.

The Razorbacks' reserves outscored the Aggies 27-4, led by 12 points from Daryl Macon.

"Our bench, which I think is our most important component, continues to play well," Arkansas Coach Mike Anderson said. "Our depth, that's the strength of our team, and we do it with numbers."

Junior forward Trey Thompson had another solid stat line in his 18 minutes, including a career-high six assists to lead all players. Thompson added 5 points, 3 rebounds and 1 steal.

"That's from one of your big guys," Anderson said of Thompson's six assists. "That just puts you in the mind of one of our favorite guys that was here tonight and that's Oliver Miller, who was one of the great passing big guys that we had."

Thompson sparked an offensive surge for the Razorbacks after entering the game for the first time. Thompson fed Macon on a backdoor cut down the left baseline for a layup that put Arkansas ahead 8-6. A few moments later, guard Anton Beard cut down the right side of the lane and Thompson found him for an easy layup.

"I think it's just the offense we're in," Thompson said. "We're in a motion offense with people moving and the ball moving. When they were open, I just tried to get it to them."

Thompson, who got a big ovation when he checked out after his first stint in the second half, passed to Macon for a key dunk with 2:27 remaining as the Razorbacks extended their lead to 77-69.

The officials stopped the game to check the monitor at the 4:18 mark after Texas A&M's Kobie Eubanks was called for a foul away from the ball on Jaylen Barford.

Whatever led to the foul did not sit well with Barford, who was steamed and had to be calmed down by Mike Anderson.

Barford made a pair of free throws after the foul, then added a step-back jumper from 16 feet and a steal and layup, all within 50 seconds, to give Arkansas a 75-69 lead.

"It was nothing really," Barford said of his verbal exchange with Eubanks. "Just a little friendly talk was all."

Arkansas made 9 of 10 free throws in the final 1:05 to clinch the victory. Daryl Macon went 5 of 6 from the stripe in that span, while Moses Kingsley and Manny Watkins were both 2 of 2.

Arkansas swept Texas A&M and improved to 7-0 against teams from the state of Texas on the season. Texas A&M has lost nine games in a row in Fayetteville, including 0-3 since joining the SEC. The Aggies haven't beaten the Hogs on the road since a 93-76 victory in Barnhill Arena on March 1, 1986, Coach Nolan Richardson's first season with the Razorbacks.

Arkansas guard Dusty Hannahs made the only field goal through the first 3:45, a scoop layup at the 19:02 mark. The score at the first media timeout was 2-2 after Texas A&M's Tyler Davis made a short shot in the lane.

Dustin Thomas scored at the rim in the closing seconds of the first half. Thomas was just outside the left block as guard Dusty Hannahs ran the baseline out to the three-point line in the left corner. Thomas faked a pass to Hannahs, which drew his defender, leaving the forward a clear path to the bucket.

Thomas scored 9 points on 4-of-6 shooting, tying his point production from games at Oklahoma State and LSU as his best since scoring 11 in an 84-72 victory over Houston.

Arkansas fans gave mock applause when A&M's Tonny Trocha-Morelos was called for an over-the-back foul on the offensive boards with 10:46 remaining in the first half. It was the first foul called against the Aggies after Arkansas had been whistled for five fouls.

Texas A&M went 7 of 8 on free throws in the first half to 1 of 3 for the Razorbacks.

In the second half, Arkansas made 21 of 24 free throws while the Aggies were 2 of 3.

Former Razorbacks great Oliver Miller was introduced at midcourt and helped call the Hogs during the first half. Miller is Arkansas' SEC Legend this season, and the Fort Worth native will be honored for it at the SEC Tournament.

Miller was hanging out with former teammate Todd Day, the Hogs' all-time leading scorer who is now the head coach at Philander Smith College. Miller, Day and Lee Mayberry, who is on the Arkansas staff, were teammates for a four-year run that included three Southwest Conference titles, a run to the Final Four in 1990, and an SEC title in their first season in the league.

"They came and hung around our guys at the shootaround today, and Big O was at practice yesterday," Coach Mike Anderson said. "They're part of the family."

Mike Anderson did not like the speed of the game in the first half.

A larger-than-normal number of scouts was in attendance Wednesday, presumably to get a look at Texas A&M freshman Robert Williams as well as other potential professional players.

Williams, who has first-round draft potential according to many analysts, had 16 points on 7-of-12 shooting, 11 rebounds and 3 blocked shots.

Williams blocked a Moses Kingsley shot from near point-blank range midway through the second half to extend his streak of having a block to all 27 games. He's the only player in the country who has achieved that feat.

Players, coaches and other personnel from both teams, along with members of the Arkansas ROTC, held a large U.S. flag at midcourt to participate in the national anthem.

• Arkansas posted 11 steals, the seventh time this season the Razorbacks have had 10 or more steals in a game.

• The Razorbacks have won four consecutive SEC games twice this season, the first time Arkansas has done it since the 1997-98 season.