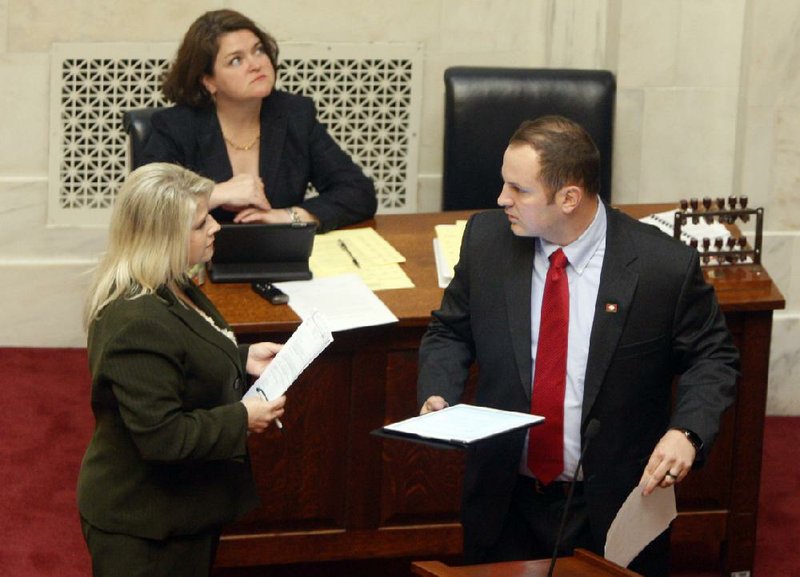 Republican Sens. Linda Collins-Smith of Pocahontas and Trent Garner of El Dorado talk Thursday on the Senate floor about pulling the campus-guns bill from consideration. Sitting behind them is Cindy Herron, Senate assistant public information officer.

A proposed constitutional amendment to reduce lawsuit payouts advanced out of committee Thursday, but only after the limits were doubled.

After a 14-3 vote by the House State Agencies and Governmental Affairs Committee, Senate Joint Resolution 8, by Sen. Missy Irvin, R-Mountain View, heads to the House for approval.

In the amended version of the proposal, noneconomic damages -- when money can't remedy the losses -- and punitive damages -- awarded to punish and deter wrongful behavior -- would be limited to $500,000 instead of $250,000.

During each regular session, the Legislature can refer up to three constitutional amendments to voters. The Senate and House can refer one apiece.

SJR8 is a contender for the Senate's pick.

The House passed House Joint Resolution 1016, which calls for a constitutional amendment to require voters to show photo identification at the polls. That measure now heads to the Senate for approval.

If the proposed amendments are approved by both chambers, they can be on the ballot of the November 2018 general election.

Rep. Bob Ballinger, R-Hindsville, who presented the proposed tort overhaul measure, said that after hearing concerns from lawmakers, he introduced the amendment to double the possible lawsuit payouts.

"What I did was collect the information, sit down with the senators who were working on the other side, and come up with something that we felt like we could do -- and not only get done but create some unity," Ballinger told reporters.

The point of the limits, Ballinger said, is to rein in costs that impede economic growth, especially for those in the health care industry.

But Rep. Douglas House, R-North Little Rock, said the limits in the amendment impede on the right to jury trials.

"Listen, you can have a jury trial if you want to, but you're just going to get $500,000. That's exactly what this amendment says," he said.

"I cannot think of a more horrible path to take in abandoning the jury system where 12 people in our community decide what's right, what's fair, what's just in each individual case."

The proposal is widely supported by business interests, said Randy Zook, chief executive of the Arkansas State Chamber of Commerce.

"Today I ask just simply that you allow our Arkansas voters the chance to decide for themselves whether or not to make Arkansas more appealing and more attractive to new and additional business prospects," he said.

Ballinger also amended a part of SJR8 so that lawmakers would no longer approve every Supreme Court rule. Lawmakers would still be allowed to amend and repeal rules as well as adopt new rules with a three-fifths vote.

And Denise Hoggard, president of the Arkansas Bar Association, and Rep. Jimmy Gazaway, R-Paragould, testified that the proposed amendment would harm poor people's access to lawyers.

Unchanged is a limit on contingency fees for attorneys in civil lawsuits to one-third of the net amount of recovery obtained through a settlement, arbitration or judgment. A contingency fee is a sum of money that a lawyer receives as a fee only if the case is won.

People who can't pay an hourly rate often use a contingency agreement to hire a lawyer, said Gazaway, a lawyer.

Ballinger, a lawyer, called that "misinformation" when asked by reporters after the meeting.

This proposed amendment to change the state's tort laws comes on the heels of unsuccessful legislative efforts in 2013 and 2015 to refer similar proposals to voters.

An initiated amendment was offered in 2016, but in October, the state Supreme Court declared that "critical" parts of the proposed amendment were insufficiently described in the ballot title. The court blocked the state from counting votes cast on the measure in the November general election.

Gazaway said during Thursday's meeting that he was working on his own tort proposal, with input from Gov. Asa Hutchinson.

Asked by a reporter if his proposal was dead in the wake of SJR8's approval, he said it might take the form of an amendment on the House floor.

"I think we can do tort reform in this state," he said. "We can do it in a reasonable and responsible way that respects the business interests of this state but also respects the most vulnerable members of our society."

Before the House committee advanced the tort overhaul proposal, the House voted on HJR1016, the constitutional amendment proposal that would require voters to show photo identification before being allowed to cast ballots.

No Republicans voted against the measure. The resolution heads to the Senate for further consideration.

Rep. Robin Lundstrum, R-Elm Springs, who is sponsoring the measure, said it would increase voter confidence.

No one spoke against the resolution.

Opponents generally say there is little fraud of this kind, and the burden on voters unduly restricts the right to vote and imposes unnecessary costs and administrative burdens on election administrators, according to the National Conference of State Legislatures.