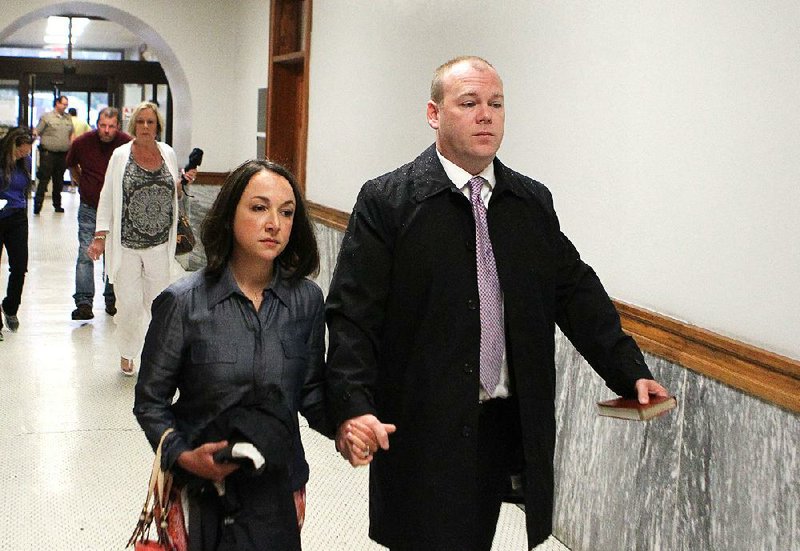 A Garland County circuit judge acquitted in the hot-car death of his toddler can return to the bench despite an ongoing investigation by the state's Judicial Discipline and Disability Commission, the Arkansas Supreme Court ruled Thursday.

Wade Naramore, who sits on the bench in the 18th East Judicial Circuit and previously presided over all the circuit's juvenile cases, is "mentally fit to return to his position," Naramore's lawyers, Erin Cassinelli and Patrick Benca, told the state's highest court in a motion to lift the suspension.

"This is a good thing," Cassinelli said. "Judge Naramore is eager to return to serving the citizens of Garland County."

Naramore no longer will be able to hear dependency-neglect cases and cannot return to the bench until Marcia Hearnsberger, the administrative judge of the 18th East Judicial Circuit, submits an amended administrative plan to redistribute that caseload among the other judges.

Naramore's attorneys and the Arkansas Judicial Discipline and Disability Commission filed a joint petition for bench suspension to the state Supreme Court in February last year. Days later, state prosecutors charged Naramore with misdemeanor negligent homicide in the July 24, 2015, death of his 17-month-old son, Thomas Naramore, who died after being left in a hot car for more than five hours.

In August, a jury acquitted Naramore -- who testified that he "lost awareness" that his son was in the vehicle and forgot to drop him off at day care.

However, the exonerating judgment did not automatically end an ongoing Judicial Discipline and Disability Commission investigation. A three-member panel composed of alternate members of the full commission must ensure that a judge is fit to be on the bench.

Naramore testified in the trial that his son's death and the subsequent legal issues were "extremely traumatic" for him and required medication as well as mental-health therapy several days a week.

A psychiatric evaluation by a Judicial Discipline and Disability Commission doctor determined that Naramore was mentally fit to return to the bench.

"As to his mental fitness to be on the bench, that's all true and I agree with it," said David Sachar, executive director of the Judicial Discipline and Disability Commission.

Sachar said the commission was not ready to recommend Naramore return to the bench until the investigation was complete, but that he does not begrudge Cassinelli and Benca for taking the matter to the Supreme Court.

"Judge Naramore is represented by excellent counsel, and they were ready for the suspension to be lifted," Sachar said. "They were doing what's best for their client and have been very cooperative with us. This has been a fact-driven, nonadversarial process."

The lengthy investigation hit a snag regarding a matter that is confidential and sealed by a lower court, Sachar said.

"It's a unique, novel situation that we're facing over here," Sachar said. "We don't know if it's a violation or an impediment, but it is serious enough of an issue that it made us want to look at it. I am proud of our panel for being considerate of all issues and for opposing counsel being so cooperative."

The state Supreme Court on Thursday ruled against Naramore's request to keep the commission's investigative report under seal. The confidential matter that was sealed by the lower court will be redacted from the Judicial Discipline and Disability Commission's current investigative report before it is submitted to the high court today, Sachar said.

There is no timeline on when the commission's investigation will be completed and a decision rendered, Sachar said.

"The end result will be that the JDDC will either dismiss the case, negotiate a settlement or refer the case to the full commission for a formal hearing," Sachar said.

He added that it's "not lost on us how difficult this has been on the judge and the family as well as the judicial staff over there. We take our jobs seriously and we go through our cases very deliberately."

In the meantime, Hearnsberger, the administrative judge in Naramore's circuit, said Naramore could return to the bench in Hot Springs as early as Monday if the Supreme Court approves the caseload redistribution plan today.

Naramore continued to receive his $160,000 salary since the day of his suspension, as required by law. The state has spent nearly $70,000 on special judges to serve in Naramore's absence since Thomas' death. An additional $2,615 was paid to retired Circuit Judge John Langston, who presided over Naramore's trial.

Hearnsberger said that redistributing Naramore's prohibited caseload -- those of the dependency-neglect kind -- had not been difficult.

According to a previous administrative plan, Naramore oversaw about 2,321 cases in 2014.