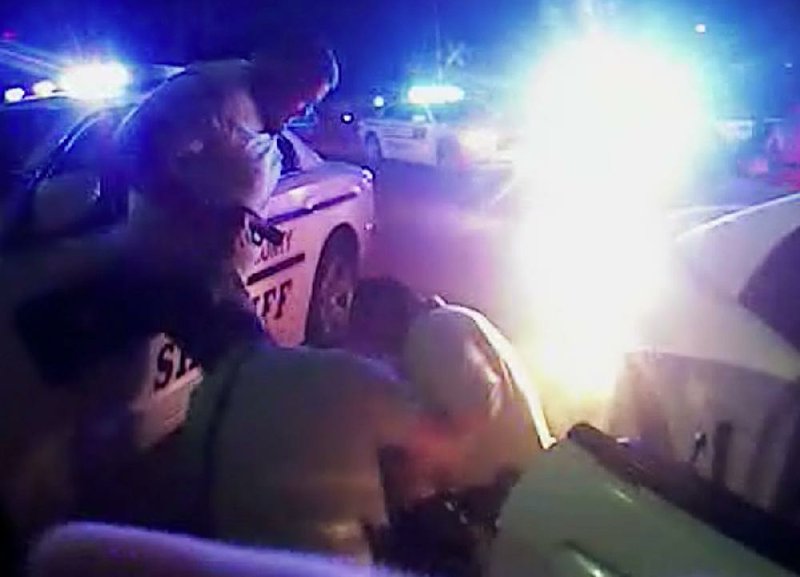 Eugene Watlington, 43, did not testify during his less-than-three-hour trial on a misdemeanor battery charge in Faulkner County District Court. Some of the officers who later testified for the defense visited briefly with Watlington before Special Judge Mark Derrick of White County arrived and called court into session.

Former Sheriff Andy Shock fired Watlington in July 2015 after Shock concluded Watlington had used "excessive force" during the May 4, 2015, arrest of Harvey Martin, 47, even though Watlington wasn't helping secure Martin at the time.

Derrick said he wanted to watch the video again and would rule by March 6. He said he also had not read a medical report on Martin, who was treated in a hospital emergency room after the arrest.

Special prosecutor Tom Tatum told reporters he is optimistic there will be a conviction.

"I think the best piece of evidence was ... the video" filmed by Mayflower police officer Dalton Elliott with a body camera, Tatum said. "There's no bias" with the video. "It ... shows what it shows."

In the video, Martin can be heard crying, "Help me! Help me! I'm not resisting" while officers were arresting, hitting and kicking him, Elliott testified.

Elliott said he counted "nine to 10 times" that the 6-foot-1 Watlington, who weighed 310 pounds according to his arrest warrant, kicked Martin with his boot. Police sirens wailed in the video as it was played in the courtroom, prompting Martin's mother to sob aloud and cover her ears with her hands.

During cross-examination, Short questioned the credibility of two of Tatum's three witnesses: Martin, who has a string of felony drug convictions, and Elliott, who said he was fired from the sheriff's office in 2012 and has since sued that office.

Elliott filmed the arrest after he joined Faulkner County deputies in chasing a Mustang carrying Martin and Christopher Cummings from Mayflower to Conway at speeds of more than 100 mph. Authorities have since said that Cummings held a gun to Martin's head and forced him to speed away from police. They've also said Martin was working undercover for Conway police the night of the arrest, though sheriff's deputies apparently didn't realize that at the time.

Elliott testified that he and two deputies had their guns drawn when they arrived at the site in Conway where the chase ended once the Mustang ran out of gas. Elliott said they told Martin to put his hands up and he did. Elliott said Martin did not resist arrest -- a statement later disputed by three sheriff's deputies.

Those deputies said Martin did not comply with their instructions and kept trying to keep his hands under his waistband. They said he could have been trying to get his pocket knife.

A Conway Police Department officer, Glen Cooper, testified that Martin was trying to help Conway police locate Cummings that night. Cooper said Watlington asked him to question Martin later because Watlington said Martin wouldn't want to talk with him. Watlington then smiled and shined a flashlight on one of his boots, the officer said.

Martin testified that Cummings struck his head with the gun and that Watlington kicked him in the mouth, causing pain. But Short said Martin's medical report indicated Martin had not suffered dental pain or injury.