At home on the Plains: Hogs keep streak alive at Auburn 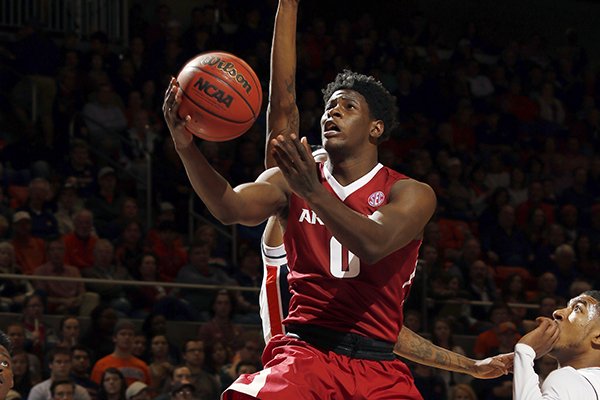 Arkansas guard Jaylen Barford (0) lays in a basket against Auburn during the first half of an NCAA college basketball game Saturday, Feb. 25, 2017, in Auburn, Ala. (AP Photo/Todd J. Van Emst)

AUBURN, Ala. -- Arkansas Razorbacks Coach Mike Anderson brought an unbeaten streak and a large gathering of friends and family into Auburn Arena on Saturday.

Anderson and the Razorbacks kept Arkansas' winning streak at Auburn Arena alive with a workmanlike 79-68 victory over the Tigers before a crowd of 8,098.

The University of Arkansas at Fayetteville (22-7, 11-5 SEC) improved to 5-0 at Auburn Arena and remained in a tie for third place in the SEC with their fifth consecutive victory.

"I'm from Alabama, so I've got a lot of family here, Anderson said. "I've been fortunate our teams have played well here, and as a coach, you enjoy coaching in a competitive closed-in environment."

"Arkansas is better than us, but they're not that much better than us," Auburn Coach Bruce Pearl said. "They came in here and controlled this game in our building."

Arkansas never trailed after a layup in transition from Jaylen Barford made it 29-28 with 4:39 left in the first half, led 40-31 at the half and repelled the young Tigers, who twice cut the deficit to six points in the second half.

Dusty Hannahs played a pivotal role in rebuilding the lead, scoring eight consecutive Arkansas points, after Auburn pulled within 55-49 with 11 minutes to play.

"As time has gone on, as a player I've recognized the crucial moments of a game," said Hannahs, who finished with 18 points, including 3 of 7 on three-point attempts. "They were making a run right there and I was just thinking 'Be aggressive and some baskets could break their back.' We got those baskets and held serve on the defensive end and pulled off the win.

Barford led Arkansas with 20 points, and contributed six points during a second eight-point spurt to fend off another Auburn run.

"We just made some plays and dug in on defense and rebounded the ball," Barford said. "This means a lot. It's another big road win with just two more games left."

The Razorbacks got strong contributions from Trey Thompson, who played a career-high 29 minutes, and Arlando Cook, who scored eight points off the bench, as starting center Moses Kingsley was limited to 15 minutes due to foul trouble.

Thompson had a game-high 11 rebounds, 10 on the defensive end, and Arkansas outrebounded Auburn 41-33. Cook went 3 of 3 from the field and scored all eight of his points in the first half.

"You look at Trey Thompson's board work," Anderson said. "Those were career minutes for him, and how he rewards me is he gets 11 rebounds and has some tremendous assists. Just his presence on the floor is huge for our basketball team."

"One of the things that I'm probably most disappointed in is the fact that we just haven't defended our home floor, particularly in conference play," said Pearl, whose Tigers dropped to 3-5 in league home games. "Our kids really wanted this one, and I thought we were ready. We just didn't execute.

"We prepared for their zone and in practice we were lights out. Then in the game we just didn't execute our spacing and our timing."

Arkansas has won 11 conference games for the sixth time in 26 SEC seasons and for the second time in the past 19 seasons.

The Razorbacks also improved to 10-5 in their past 15 games away from Walton Arena.

Kingsley had no points and one rebound in the first half after going to the bench for good at the 17:01 mark after his second foul.

Arkansas extended its nine-point halftime lead to 13 on a two occasions early in the second half.

Barford and Kingsley hit consecutive baskets to put the Hogs on top 44-31 to start the half. A dunk by Dustin Thomas on a pass by Kingsley made it 46-33 moments later.

Kingsley finished with 8 points, 6 rebounds, 2 blocked shots and 4 fouls in a season-low 15 minutes, but Arkansas outscored Auburn 36-24 in the lane.

The teams traded the lead six times in the first half, which ended with Arkansas outscoring Auburn 13-3 to lead by nine at halftime.

Print Headline: At home on the Plains