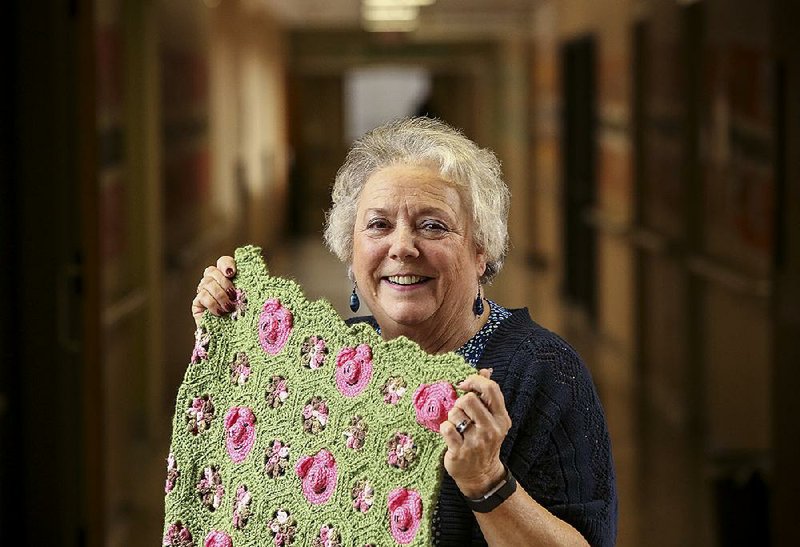 In a hallway at the Eugene J. Towbin Healthcare Center in North Little Rock, veteran Diane Bishop holds her crocheted work she titled Pigs on a Blanket, which she will enter in this year’s Veterans Creative Arts Festival.

When the small group of veterans rolled into the room full of wood-turning lathes at North Little Rock's veterans hospital, they saw a distraction, a change of scenery from their hospital beds.

The medical professionals saw something else: treatment.

With the smell of freshly shaved wood in the air, stroke patients re-honed their lost motor skills. Amputees rebuilt some of their lost confidence, and Alyssa Welch, a Central Arkansas Veterans Healthcare System recreational therapist, watched with a smile.

"This is not just a diversion activity," she said. "It has a treatment-oriented goal."

U.S. Department of Veterans Affairs hospitals use art and recreational therapy to help more than 115,000 veterans cope with physical and emotional disabilities each year, according to the department.

As part of that program, local VA hospitals call for submissions to their annual Veterans Creative Arts Festivals at the beginning of each year, and the winners of the local competitions move on to the national competition in Washington, D.C.

Veterans from central Arkansas have made a name for themselves in the national contest, winning three gold medals and one bronze medal in the past two years.

There's a variety of categories including woodworking, painting, knitting, music and dancing.

John James, a Vietnam-era Navy veteran from Pine Bluff, was at the hospital for an extended stay because of diabetes complications. The big, bearded man, who looks like he's worked with wood his whole life, was laser-focused on finishing his sixth pen.

"I don't care for bingo," he said. "But I can do this. Here, I make something. This is more beneficial."

She was only there to watch. Wood-turning doesn't interest her as much as knitting.

In 2015, she won the national gold medal for a red-and-black vest she knit.

"I never even thought I could win a national competition," Bishop of Shannon Hills said.

She had happened upon a competition poster at the North Little Rock VA and submitted the vest. Her gold medal earned her a weeklong trip to North Carolina with all the other winners.

"It was wonderful," she said.

This year, she's entering an elaborate rug, which combines different colors of yarn to form the image of a stream winding through the mountains.

Any veteran who receives care through the VA can submit an entry to a local competition.