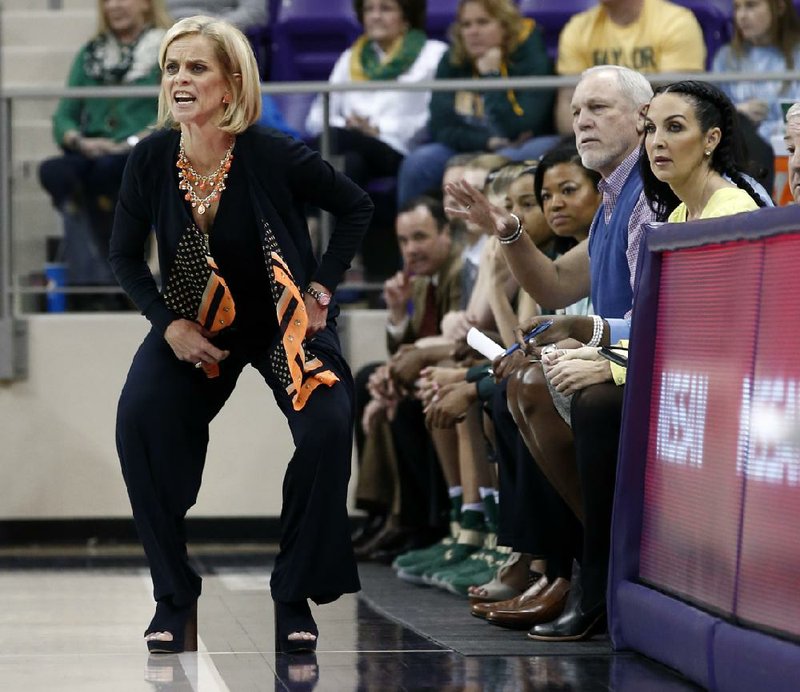 Addressing the audience at Baylor's Ferrell Center in Waco, Texas, after the Bears defeated Texas Tech 86-48, Mulkey told the audience after picking up her 500th career victory to "knock them right in the face" if they heard somebody say they would never send their daughter to Baylor.

Mulkey apparently was referring those incidents and the black mark they have left on Baylor's athletic programs and the school in general.

On Sunday, she was backtracking.

In a statement to ESPN.com, she said: "I hate that I used the remark about punching them in the face. That was not literal. I was trying to make a point, to be firm in what you are saying back at them. I'm not a violent person. I apologize for the very poor choice of words.

"My point was, 'Please don't paint, with a broad brush, the women at Baylor. I didn't think about what I was going to say. I looked at my players, and the little girls and the women who are cheering for them. And I spoke with a lot of emotion."

Andrew Peters is proof that hockey enforcers never lose their ability to fight.

Peters, 6-4, 240 pounds, who played in 2029 games in 2003-2010 with the Buffalo Sabres and the New Jersey Devils with four career goals and 650 penalty minutes, was suspended indefinitely as a coach of a youth hockey team, pending a Buffalo police investigation into his role in an on-ice brawl.

Buffalo Junior Sabres president Kevyn Adams announced the suspension Sunday, a day after a melee occurred during a game between the 15-and-under team coached by Peters and the Ontario-based Hamilton Junior Bulldogs.

A video posted on YouTube shows the fight escalating into the Sabres' bench, when Peters becomes involved in attempting to separate the players. At one point, the 36-year-old appears to shove a Hamilton player backward onto the ice.

According to a person familiar with the situation, Peters told Junior Sabres officials that he slipped while attempting to get one of the Hamilton players away from Buffalo's bench. The person spoke to The Associated Press on condition of anonymity because the conversation was to remain private.

Buffalo police were called to the downtown arena to investigate the brawl, but no charges were filed. The investigation continues, police spokesman Michael DeGeroge wrote in an email.

Peters still works for the Sabres and co-hosts a daily radio/TV show titled "The Enforcers."

Run to the island

NFL prospects are headed to Indianapolis today for the annual scouting combine in hopes of improving their chances of being selected in April's NFL Draft. Now Adidas is adding some extra incentive.

The shoe and apparel company announced Monday that it will buy a private island for any draft prospect who breaks the combine record in the 40-yard dash while wearing Adidas cleats. The record is 4.24 seconds, set by former Tennessee Titans running back Chris Johnson in 2008.

The one catch is the value of the property will be capped at $1 million. If the record is not broken, the prospect with the fastest time will receive a $10,000 bonus.

What was the most penalty minutes Andrew Peters had in a season?