Drone another tool Rogers police can use 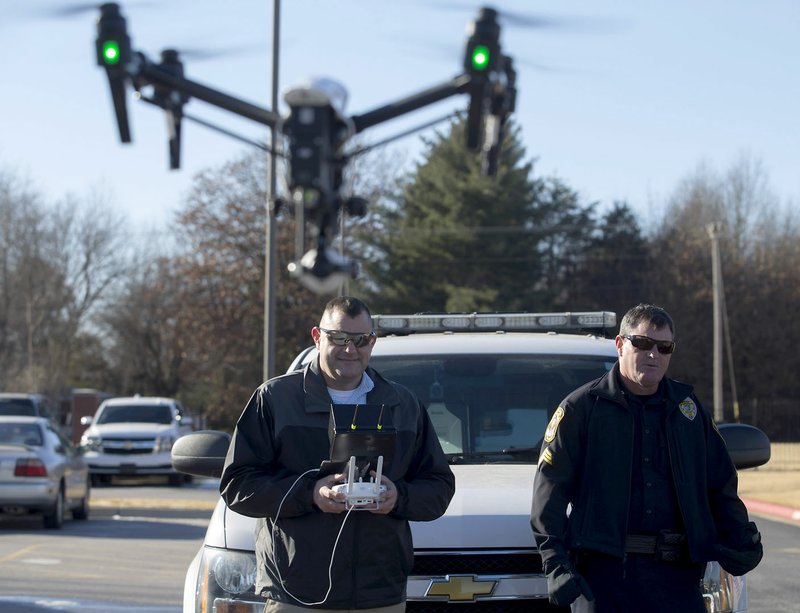 Rogers police recently used a drone to search and map the search area in the case of a missing woman and her young daughter.

Capt. Jarod Mason piloted the drone to help the Siloam Springs Police Department search in the area where Carol Davidson's vehicle was found in November. She and her 18-month-old daughter remain missing.

• Must be vetted by the Transportation Safety Administration

Rogers Police Chief Hayes Minor believes the drone could be a valuable asset for police, particularly in searches. It also could be used for aerial photography of a crime scene or at a large traffic accident, he said.

"It may also serve as an extra set of eyes for the SWAT team during some operations," Minor said.

Rogers police purchased the drone in September for about $4,500. The price included extra batteries and accessories such as two controllers and two iPads. The DJI Inspire I is only armed with a camera, Mason said.

The drone will be used to increase public safety, nothing more, Minor said.

"We are not going to be hovering over someone's house watching them come and go," Minor said.

Mason, who owns a few drones, has his remote pilot license issued through the Federal Aviation Administration, and Rogers police have administration approval to fly the drone.

Rogers is the only police department among the area's big four cities that uses a drone.

Shawn Holloway, who will take over as Benton County sheriff this month, said drones are a useful law enforcement tool, and he wants to obtain one for the Sheriff's Office.

Bentonville Police Chief Jon Simpson said his department doesn't have a drone, but he understands why some departments embrace the technology.

Spokesmen for the Fayetteville and Springdale police departments and Arkansas State Police said they have no plans to purchase drones.

Sgt. Brian Dedrick, a spokesman for the North Little Rock Police Department, said the department started a drone program several years ago but never received approval to fly, so the program was discontinued.

The Rogers police drone has a 15,000-foot range in any direction, but the flying height is limited to 400 feet, and the pilot has to keep the drone in his line of sight, Mason said. The drone automatically returns to the takeoff area when the battery weakens, he said.

Rogers police have to notify air traffic controllers when flying in airspace near airports, and they have to maintain flight logs and other records for the aviation administration, Mason said.

The drone, with a flying time of 30 minutes, can cover more territory in a shorter period of time than officers on foot.

"Why not use technology, especially if you are dealing with missing children? I'm not interested in anything else but that missing 2-year-old child," Mason said.

People can fly drones for their personal use, but it is against federal rules for someone to use a drone for commercial use without a license, Mason said.

Other Rogers officers will be trained to fly the drone, and they will be required to receive their remote pilot license, Mason said.

"It's just an advantage from the sky that we normally would not have," he said.

"Our police department will not have a Predator out there," Miles Mason said.

A Predator drone is a remotely unmanned aircraft that can be armed with missiles and is used by the military.

Print Headline: Drone another tool Rogers police can use