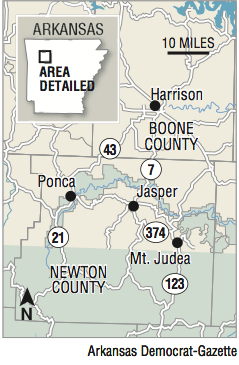 Armed with GPS technology, truck drivers have been barreling through a rugged section of the Ozark Mountains, burning up brakes and occasionally bouncing off bluffs or rolling into a ditch.

"Several of them go through here with their brakes smoking or on fire," said Austin Albers, general manager of the Buffalo Outdoor Center in Ponca, which is near the Buffalo National River in Newton County.

Mike Mills, president of the resort, said the number of 18-wheelers passing through Ponca has increased from six a year to at least six a day.

"Twenty years ago you would only see local trucks -- maybe a half-dozen strange ones per year," he said. "Now it is that every day and sometimes double that."

An average of 450 vehicles a day travel Arkansas 43 in Ponca, according to the Arkansas Highway and Transportation Department.

The Buffalo National River attracts about 1.5 million visitors a year, and Ponca -- population about 100 -- is a popular spot for visitors who want to canoe the river, hike or stay in cabins. Ponca anchors the north end of Boxley Valley.

Tourists go to Boxley Valley to see elk, not 18-wheelers.

Unfortunately, runaway trucks have become a fairly common sight in this small town.

In the past 2½ years, seven trucks have wrecked on a 2-mile stretch of Arkansas 43 just north of Ponca, said Albers. That number includes six tractor-trailers and a dump truck.

GPS -- short for global positioning system -- doesn't tell drivers there is a 1,300-foot drop in elevation from the intersection of Arkansas 103 into Ponca, 4 miles to the south, Albers said. And there are two big curves on Arkansas 43 before the hill flattens out at Ponca.

Three of those seven truck drivers managed to negotiate the first curve heading south on Arkansas 43, but they had burned up their brakes by the time they reached the second curve, Albers said. As a result, the runaway trucks hit the ditch across the highway from Lost Valley Canoe & Lodging and rolled over. Some drivers suffered minor injuries.

"So far, these trucks haven't hit anybody head on but it's coming," Albers said.

Pedestrians are also at risk, he said. Tourists walk along the highway in that area going to and from the river.

"It's just a matter of time before someone gets killed," Albers said.

Kris Jorgensen, co-owner at Lost Valley Canoe & Lodging, said there was a fatality four years ago when a trucker ran off the road, taking out her well house and part of the showers building.

"He ended up contaminating the Buffalo River with diesel," she said.

Albers said the increase in truck traffic has coincided with advances in GPS technology.

The straightest shot for the 154-mile drive from Springfield, Mo., to Clarksville includes a 31-mile section of Arkansas 43 that goes from Harrison to Boxley. It's not obvious when looking at Google Maps or other websites, but the drive can be harrowing for truckers.

Mehdin Ibrahimovic, president of Hawkeye Transportation LLC of Evansdale, Iowa, said his driver was hauling 40,000 pounds of Capri Sun and other juice beverages when he crashed on a curve at Ponca on Nov. 9.

"It was a heavy load," Ibrahimovic said. "The driver said he didn't know it was that steep. He thought it was just a shortcut. It just showed a straight line. It didn't show how big that hill was."

Ibrahimovic said he contracts drivers and they choose the routes, but he advises them to avoid Ponca if they are hauling more than 30,000 pounds, or if it has been raining or snowing. He said the Nov. 9 crash resulted in a total loss of the truck and trailer.

"If the load is too heavy, I tell them to just stay away from there," Ibrahimovic said.

Other trucks that wrecked in the area were carrying canned goods, pudding, diapers and detergent.

Albers sent an email to the state Highway Department a month ago about the problem, and warning signs have been in the works.

On Dec. 22, another truck wrecked on the curve just north of Ponca.

"I had to take the car into a ditch to keep the truck from hitting us," said Katie Stanbrough, an employee of Lost Valley Canoe & Lodging. "They get in the mountains here and they don't know how to gear down."

She said Newton County Sheriff Keith Slape, who was already helping one trucker , had to jump over a guardrail to avoid the truck that was fishtailing down the hill.

Steve Lawrence, District 9 engineer for the Highway Department, said the department plans to post signs on Arkansas 43 near the intersection with Arkansas 103 to warn trucker in particular about the steep hill. He said the signs should be up within the next month or two, depending on how long it takes to have them made.

The large signs will read "Crooked and steep next 3 miles. Drive with care."

Lawrence said he's not sure yet how many signs will be posted. The Highway Department is re-evaluating the situation after the Dec. 22 crash. Lawrence said the grade of the highway coming off the mountain north of Ponca varies between 6 percent and 12 percent, "which is not uncommon on our highways in Newton County."

A similar problem on Arkansas 123 south of Mount Judea was alleviated with signs that directed southbound truckers to take an alternate route -- Arkansas 374 from Vendor 7 miles west to Arkansas 7.

But such a detour isn't really practical for the Ponca problem because signs would have to be posted about 25 miles to the north in Harrison to tell drivers to take Arkansas 7 there instead of Arkansas 43, Lawrence said.

"Nine out of 10 times when we have a truck get hung up on these roads [these are steep and winding roads] they are following GPS," Morgan said.

Jorgensen, who is a volunteer firefighter, said drivers who've wrecked trucks recently in Ponca were headed to a Wal-Mart Stores Inc. distribution center in Clarksville. They were independent drivers, not driving Wal-Mart trucks, she said.

Wal-Mart drivers don't take the route through Ponca, but the retailer has no control over independent truckers, said Scott Markley, a Wal-Mart spokesman.

"While the third-party carriers are responsible for their drivers and operations, we take road safety very seriously," he said via email. "Wal-Mart is proud to have one of the largest and safest private fleets in the industry while traveling approximately 700 million miles a year."

Jorgensen said she hopes the new signs on the mountaintop will help.

"We're just trying to cut back on the number of trucks coming through here, brakes smoking, out of control," she said.