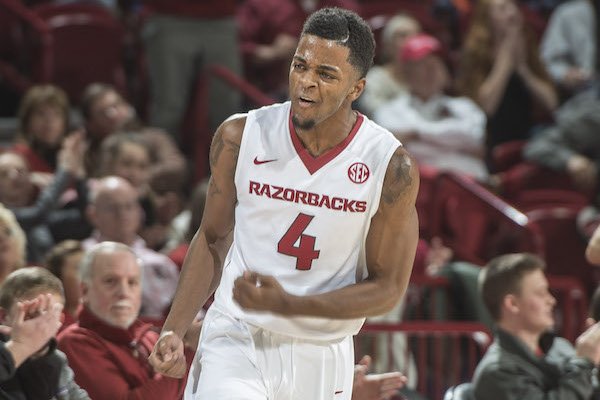 Daryl Macon (4) of the Arkansas Razorbacks celebrates a made three pointer against Florida Thursday Dec. 29, 2016 at Bud Walton Arena in Fayetteville.

FAYETTEVILLE -- Arkansas' basketball team will try to avoid suffering back-to-back losses for the first time this season when the Razorbacks play Tennessee tonight.

Tipoff is 5:30 p.m. at Thompson-Boling Arena in Knoxville, Tenn.

It was Arkansas' first loss in 10 games at Walton Arena this seaosn.

"We feel like we let one go," Razorbacks Coach Mike Anderson said. "Now we have the opportunity to go on the road and steal one."

Anderson said the Razorbacks' defense let them down against Florida -- including giving up points three times on inbounds plays -- and allowed the Gators to dictate the game's tempo.

The Razorbacks, who have seven newcomers, also learned against Florida the greater sense of urgency and toughness it takes to win in SEC play, Anderson said.

"I didn't think we quite got the grasp of that," he said. "So lets see if we can take that mindset and get better in the next game."

Tennessee opened SEC play with a 73-63 victory at Texas A&M.

"We got beat by a Tennessee team that came in and did a really good job of attacking us on both ends of the floor," Aggies Coach Billy Kennedy said.

The Vols held the Aggies to a season-low 34.4 percent shooting (21 of 61), forced them into a season-high 16 turnovers and had 10 blocked shots.

"I think they were just more active," Anderson said. "It seemed like wherever A&M had one guy, they had two guys coming at him."

"We don't really have a choice," Tennessee Coach Rick Barnes said of playing so many freshmen. "They have enough under their belt now to know you've got to compete every night."

Kyle Alexander, a 6-10 sophomore, is Tennessee's only starter taller than 6-5.

"It's a team that plays scrappy," Anderson said. 'They get in the passing lanes, they create offense from their defense.

"I think they've bought in to what Coach Barnes wants them to do and they're playing with a lot of confidence."

"We felt we had to pressure them so the perimeter guys couldn't just lob the ball over our head," Barnes said. "We feel our post defense has to start on the perimeter and we have to help each other a lot and swarm and be aggressive."

Tennessee-Chattanooga beat Tennessee 82-69 to open the season, but the Vols' four losses since then have been to teams ranked in The Associated Press Top 25 poll: 72-65 to Wisconsin and 69-65 in overtime to Oregon at the Maui Classic, 73-71 at North Carolina and 86-76 to Gonzaga in Nashville, Tenn.

Arkansas junior guard Daryl Macon led the Razorbacks with 22 points against Florida. Senior center Moses Kingsley had 13 points, 14 rebounds and 4 blocks, but shot 5 of 15 from the field. The rest of the Razorbacks combined to score 37 points.

Arkansas has won four consecutive games against Tennessee, including 75-65 in Knoxville last season when senior guard Dusty Hannahs led the Razorbacks with 17 points and Kingsley had 9 points, 8 rebounds and 4 blocked shots.

"We only have five guys that were on that team last year," Anderson said. "So that has nothing to do with this year."

Anderson is 5-2 all-time against Barnes, including 2-0 last season 3-2 in the Big 12 when Anderson coached Missouri and Barnes coached Texas.

"His teams are going to be sound fundamentally," Anderson said. "They're always going to get after you on defense. They're well coached."

Barnes is 627-338 record in 30 seasons at George Mason, Providence, Clemson, Texas and Tennessee.

"This guy's been around a long time," Anderson said. "He's won a lot of basketball games.

"They're not going to beat themselves. That's one thing I can say about Rick's teams."