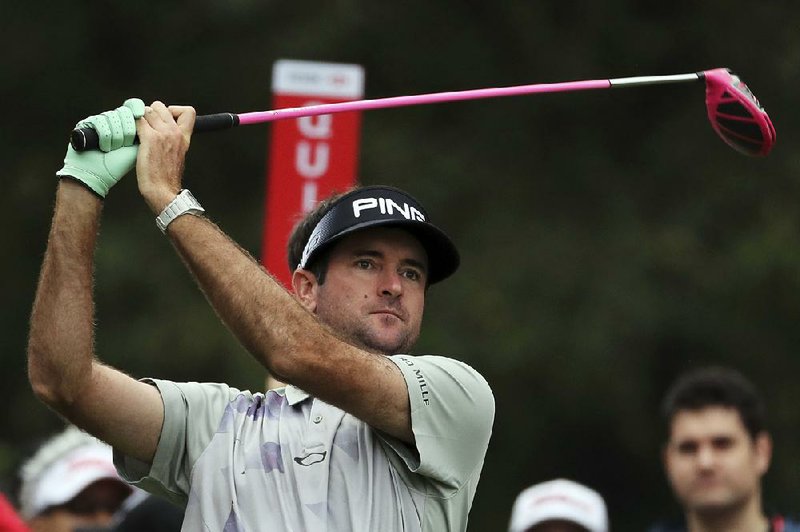 Bubba Watson said he would like to switch to different colored balls throughout his rounds, but the USGA and PGA aren’t too keen on the idea.

Bubba Watson gazed toward the blue Pacific on the first tee at Kapalua, Hawaii, and unleashed a big drive with his pink golf ball.

Next up likely will be a lime green ball.

The two-time Masters champion is even thinking of a two-tone ball.

"If we're going to challenge ourselves, let's challenge ourselves to make something that's really off the wall, that's still playable," Watson said. "Companies I want to be with are ones that let me have an influence and let me in on the decision-making."

That company is South Korea-based Volvik, with whom Watson signed a multiyear deal. The Volvik ball mainly has been used on the LPGA Tour in recent years, and Watson represents its first big player on the PGA Tour.

Watson said he initiated the interest after watching the World Long Drive Championship in which the finalists used colored Volvik balls.

Watson also will use a white ball, which Volvik calls the "Blue Pearl" because it has a hint of blue when slightly rotated. Early reports out of South Korea said that Watson wanted to play a green ball at the Masters, which is not entirely true.

Watson has always been about color, even the year he wore all white the first time he won the Masters. He had Ping make a hot pink shaft for his driver, and then the club head in pink, which he used to raise money for charity.

He thinks colored golf balls, which haven't been in style on the PGA Tour in 30 years, could help in other ways.

"You talk about growing the game, why would you not want people to have more fun, make the game more fun, interesting and creative?" Watson said. "Same thing that Ping let me do with a pink driver."

Watson said he wants to talk to the USGA about using a different colored ball on different holes, though that would be unlikely. The USGA has a "Conforming Golf Ball List" in which each ball is listed separately, sometimes based on the markings. Carter Rich, the USGA's director of equipment rules and conformance, said each ball color would be a separate listing. As long as the PGA Tour adopts the "One Ball Condition," Watson would have to stick with the same color for an entire round.

"Slept in a boy's bed the night before signing day while other coaches were out in the front yard waiting for 7 o'clock," Bowden responded. "Slept in his bed that night, got up and ate breakfast. His momma cooked me breakfast. I knew I had him."

"That was back when you could do that. You can't do that anymore."

What college was Bobby Bowden the head coach before Florida State?