Obama, Pence in huddles to defend law, take it apart by Compiled by Democrat-Gazette staff from wire reports | January 5, 2017 at 5:45 a.m. 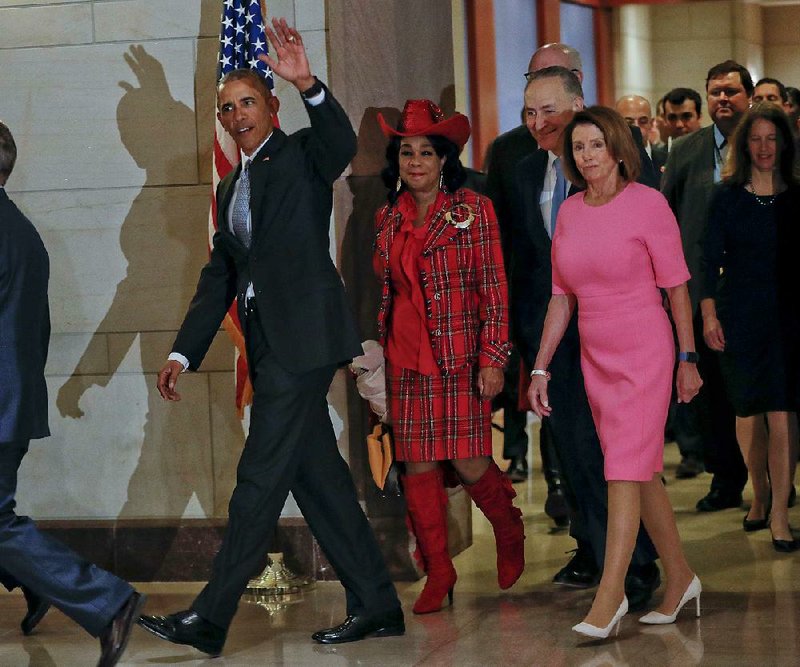 WASHINGTON -- President Barack Obama met with congressional Democrats privately Wednesday morning to map out a strategy to defend the Patient Protection and Affordable Care Act and other health care policies -- the day that Republicans began debate on how to get rid of the far-reaching law. 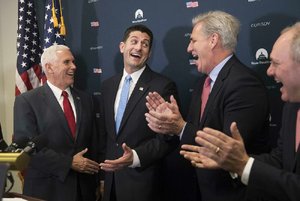 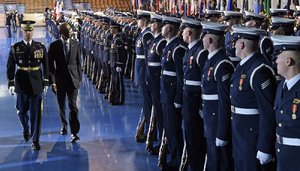 Photo by SUSAN WALSH / AP
Army Col. Jason Garkey escorts President Barack Obama on a review of the troops Wednesday during a Full Honor Farewell Review for Obama at Joint Base Myer-Henderson Hall, Va. Obama urged the military and the country never to abandon America’s “core principles” wherever force is needed. “It has been a privilege of a lifetime to serve with you,” he told the troops. “I am a better man having worked with you.”

Obama's rare visit to Capitol Hill, less than three weeks before Donald Trump assumes the presidency, is part of his administration's final push to hold on to its achievements before handing over the reins of power in Washington.

While Obama took no questions from reporters, participants in the nearly two-hour meeting said he told members of his party that they did not have to "rescue" Republicans and that they should "stay strong" as they labored to replace the law.

INTERACTIVE: What happened in the elections for Congress?

"Despite the negativity, you have a big chunk of the country that wants this thing to succeed," Obama told Democrats, according to an aide who attended Wednesday's session.

Within 10 minutes of Obama's arrival, Vice President-elect Mike Pence joined House Republicans in the Capitol basement to discuss the incoming administration's plans to reverse not just the health care law but also a slew of executive actions.

Afterward, Pence told reporters that he and Trump would pursue a "two-track approach" to chip away at the Affordable Care Act through a combination of executive powers and legislation. Trump is "working on a series of executive orders that will enable that orderly transition to take place," Pence said, and is determining other policies that can be reversed.

"Obamacare has failed," Pence said later in the day, after meeting with GOP senators.

"We're going to be in the promise-keeping business," Pence declared. Just 16 days before Trump takes over the Oval Office, he said that repealing and replacing the health care law will be the president-elect's "first order of business."

"The speaker of the House used the word 'stable,' and we will do that," Pence said Wednesday at a news conference after the private meeting with House Republicans. There's a "broad range of ideas on how to do this," he said, without giving details. House Speaker Paul Ryan has said a focus would be on maintaining patient care.

"The American people voted decisively for a better future for health care in this country, and we are determined to give them that," Pence said.

Asked to explain what specific executive actions regarding the Affordable Care Act the president-elect is considering, Phillip Blando, a transition spokesman for health care issues, replied, "We do not have any additional comment at this time beyond what the vice president-elect said today on Capitol Hill."

According to a lobbyist in touch with congressional aides on the issue, the Trump transition team has been mulling ways to pare down a group of "essential health benefits" that define the services required under health plans that are sold to individuals and small businesses in the Affordable Care Act marketplaces and beyond.

The list of benefits is a regulation finished by the Health and Human Services Department in 2013, and the incoming administration could alter it without help from Congress.

Trump took to Twitter on Wednesday morning to urge Republicans to "be careful in that the Dems own the failed Obamacare disaster." In a dig at Schumer and his allies, Trump added: "Don't let the Schumer clowns out of this Web."

Less than half an hour after Trump's social media messages, Schumer tweeted: "Republicans should stop clowning around with America's health care. Don't #MakeAmericaSickAgain."

House Minority Leader Nancy Pelosi said the GOP is aiming to also scuttle Medicaid and Medicare, going after programs that are "very personal in the lives of the American people."

Democrats, including Schumer, signaled they did not feel any responsibility to craft a substitute health care bill.

"If you are repealing, show us what you'll replace it with. Then we'll look at what you have and see what you can do," said Schumer, who met briefly with Pence on Wednesday.

Obama "wants us to go out there and fight," Rep. Elijah Cummings said, while fellow Maryland Democrat Ben Cardin added, "We're going to be engaged and we're going to fight for everything that we have."

Speaking to reporters Wednesday, White House spokesman Josh Earnest said Obama made it clear to Democrats that they are well-positioned to defend the signature health-care law, which has extended insurance to more than 20 million Americans.

"And the president feels strongly this is a debate that Democrats can win because of the impact that repealing the law, as Republicans are vowing to do, would have on the lives of people in communities all across the country," he said.

Underscoring the law's widespread constituency, the Obama administration said at least 8.8 million people signed up through Dec. 31 for coverage in 2017.

However, Obama told lawmakers privately that he recognized he had not succeeded in selling the law to the public during his time in office. "There was an acknowledgment that so many features were so popular, but there was a failure to communicate that," said Sen. Jeff Merkley, D-Ore.

The proposal, which is co-sponsored by Westerman, was crafted by members of the Republican Study Committee, which describes itself as "the conservative caucus of House Republicans."

Among other things, it would allow Americans to purchase health care plans across state lines, limit medical malpractice litigation, encourage greater use of health savings accounts. In addition, those with qualified health insurance plans would receive standard health care tax deductions of $7,500 for individuals and $20,500 for families, regardless of the actual cost of the plan.

While eager to get rid of the Affordable Care Act, Westerman said it's going to be a time-consuming and complex process.

"I think of it as an unwinding," he said. "I see no conceivable way you could just one day have Obamacare and the next day not have it. It's taken so long to get to where it is, and you've got so many people that are dependent on it, almost forced into it in some instances."

The Arkansans he hears from are unhappy with the current system, Westerman said.

"There's a lot of people whose premiums have gone up, their deductibles have gone up and they may have insurance but it's too costly to use it, so we've got to do something that works for everyone," he added.

Already on Tuesday, the first day of the 115th Congress, Republicans introduced budget legislation with instructions for House and Senate committees to begin repealing the Affordable Care Act.

The bare-bones spending outline gives members of four committees -- Ways and Means, and Energy and Commerce in the House; and Finance, and Health, Education, Labor and Pensions in the Senate -- until Jan. 27 to produce bills that each would save $1 billion over a decade by slashing elements of the heath care law.

"Today, we take the first steps to repair the nation's broken health-care system, removing Washington from the equation and putting control back where it belongs: with patients, their families and their doctors," Senate Budget Committee Chairman Mike Enzi, R-Wyo., said in a statement.

Senate rules allow budget resolutions to pass by a simple majority -- a maneuver that guarantees that the chamber's Democratic minority will not have enough votes for a filibuster to block the eventual repeal bill. Only changes related to taxes, spending or the long-term federal budget are eligible for the simple-majority treatment, however, restricting the extent to which Republicans can rescind the law.

Other parts of the law, such as the structure of the insurance marketplaces, would likely require a vetoproof margin of 60 votes in the Senate, a trickier task because the new Senate has 52 Republicans.

Since its passage by Congress in the spring of 2010 -- entirely with Democratic votes -- the Affordable Care Act has spurred the most significant changes to U.S. health policy since the creation of Medicare and Medicaid during the Great Society legislation of the 1960s. It also has faced sustained opposition by its Republican foes, leading to two Supreme Court cases and a lawsuit over cost-sharing subsidies that is now before the U.S. Court of Appeals for the District of Columbia Circuit. The arrival of a GOP president sharing their antipathy for the law now gives congressional Republicans their long-awaited chance to demolish it.

The Affordable Care Act is best known for having expanded insurance coverage, starting in 2014, in two ways: new marketplaces selling private health plans to Americans who do not have access to affordable health benefits through a job, and an expansion of Medicaid in about three-fifths of the states.

Three years later, a U.S. census survey reported that the nation's uninsured rate had declined to 9.1 percent, with most of a recent decrease coming from people who bought insurance on their own and more who had joined Medicaid.

The president's visit to the Hill is part of a broader effort by his administration and like-minded Democrats to defend a central element of Obama's domestic legacy.

On Wednesday morning New York Gov. Andrew Cuomo, a Democrat, drew attention to the stakes for his own state by issuing a county-by-county breakdown of the estimated 2.7 million New Yorkers who would lose coverage if the law was repealed. He pointed out that New York would lose $595 million this year in federal money that has helped the state expand its Medicaid program.

Meanwhile, U.S. Health and Human Services Department officials have been trying to use to their advantage the fact that the change in administrations will take place while the fourth year's enrollment period for Affordable Care Act health plans is still underway. In recent weeks, the department has been releasing healthcare.gov enrollment figures, pointing out that the number of people signing up for 2017 coverage in the 39 states relying on the federal exchange website is running ahead of last year.