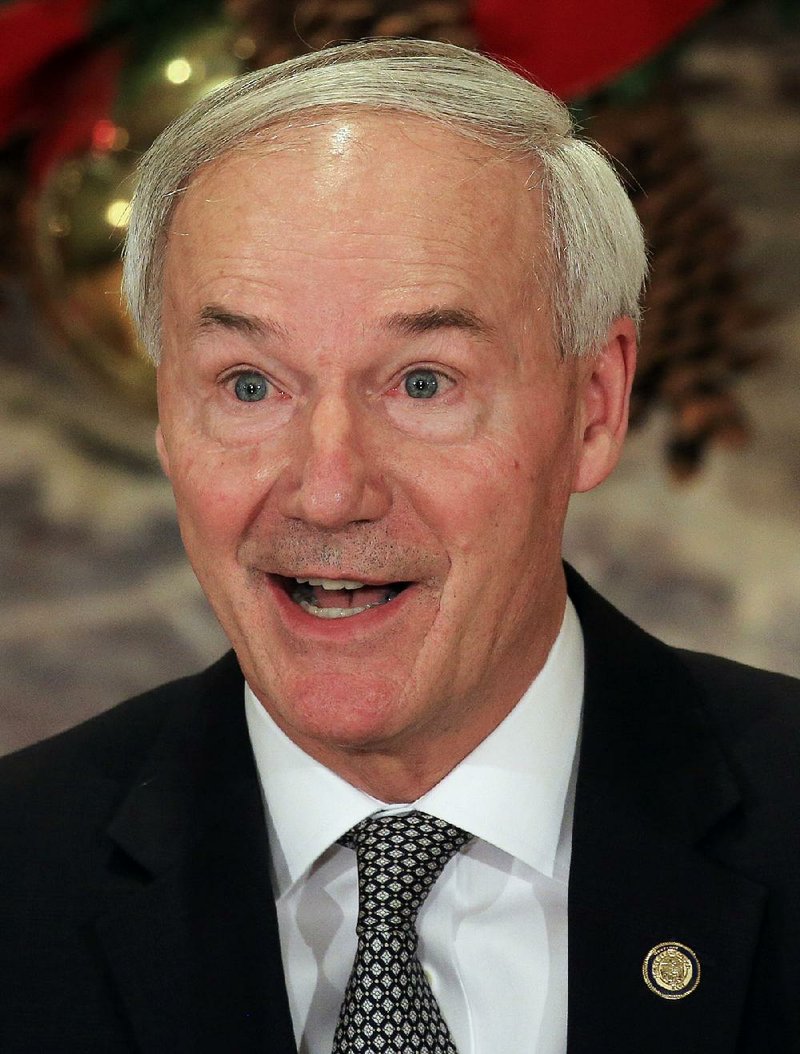 Hutchinson, who met with members of Trump's transition team in Washington last month, said Wednesday that he wants Arkansas and other states to be able to limit Medicaid enrollment to adults with incomes up to the poverty level, instead of 138 percent of that level, without jeopardizing the funding it receives under the Affordable Care Act.

During a forum Wednesday with reporters at the state Capitol, Hutchinson also said he doesn't expect a protracted fight during this year's legislative session over funding for Medicaid expansion in Arkansas.

"My sense is that there's not an appetite to re-fight the issue that we have battled on before," Hutchinson said.

Instead, he said, "the battle is getting broader waivers from the Trump administration, having more flexibility for the state and more controls over those numbers that are much higher than what we anticipated from the outset."

The forum was organized by the Arkansas Associated Press Managing Editors association to give a preview of the session that begins Monday.

Arkansas is among 31 states and the District of Columbia that have expanded their Medicaid programs, as authorized under the Affordable Care Act, to cover adults with incomes of up to 138 percent of the poverty level.

The federal government covered the full cost of medical care for the newly eligible recipients from 2014 through last year, but states on Sunday became responsible for 5 percent of the costs.

Under the health care law, the states' share is scheduled to rise each year until it reaches 10 percent in 2020.

Hutchinson and some lawmakers have expressed concern over the cost to Arkansas as enrollment has increased to more than 324,000, about 74,000 more than state officials' initially estimated would be eligible.

Under the so-called private option, most of those covered under the expanded part of Arkansas' program receive coverage through private plans offered through the state's health insurance exchange.

Starting this month, enrollees with incomes above the poverty level must pay premiums of $13 a month. The state also will provide coverage through employer-sponsored plans, instead of through the private option, to employees of participating small businesses.

Arkansas Works, as the revamped Medicaid expansion is known, also calls for enrollees to receive information about job-training programs.

Although Trump and the Republican-controlled Congress have vowed to repeal the Affordable Care Act, Hutchinson has said he hopes national lawmakers will preserve support for Medicaid expansion while transforming Medicaid into a "block grant" and giving states more flexibility to decide how to administer the program.

Hutchinson's proposal to limit Medicaid eligibility would affect those with incomes of $11,880 for an individual or $24,300 for a family of four, based on 2016 poverty guidelines.

According to a report in December by The Stephen Group of Manchester, N.H., about 15 percent of private-option enrollees, or about 48,600, have incomes between 100 percent and 138 percent of the poverty level.

Arkansans in that income range would still qualify for federal tax-credit subsidies to buy coverage on the state's health insurance exchange, Hutchinson said.

The Affordable Care Act makes such tax credits available to many people with incomes ranging from 100 percent to 400 percent of the poverty level, but those who qualify for coverage under Medicaid or other government programs are not eligible for the credits.

In guidance to states issued in 2012, federal officials said the health care law doesn't allow the enhanced federal funding to be used for partial expansions, although they said they would consider requests for such expansions starting this year under a part of the law allowing for waivers of many of the Affordable Care Act's requirements.

Changes granted under such waivers, however, cannot reduce the number of people covered, offer less comprehensive coverage or increase the federal deficit.

Hutchinson said he also hopes the Trump administration will allow the state to impose work requirements similar to those that led to about 25,000 Arkansans losing their food-stamp benefits after the state began enforcing the requirements for that program last year.

"If you give us this similar type of work requirements and worker training for Medicaid expansion, that will just in and of itself help control the numbers and help us to create some savings," Hutchinson said.

Joan Alker, director of the Center for Children and Families at Georgetown University's Health Policy Institute, said shifting Medicaid enrollees to the exchanges, where they would receive tax-credit subsidies, would increase costs to the federal government because it pays the full cost of the subsidies.

Marquita Little, health care policy director for Arkansas Advocates for Children and Families, said such a shift, along with a work requirement, would increase the state's administrative costs while increasing the risks that low-income Arkansans would lose their coverage -- for instance, for failing to pay premiums or failing to meet a work requirement.

She said she hopes Hutchinson will wait to see the effect of the changes enacted under Arkansas Works before making further changes.

"The more changes we make to the program, the more difficult it is for families and consumers to navigate the program and understand those changes," she said.

During past legislative sessions, opponents of Medicaid expansion have sought to block approval of the appropriation bill for the state's Medicaid program. Under the state constitution, approval of such bills requires a three-fourths majority of each chamber.

Sen. Bryan King, R-Green Forest, said he plans to introduce a bill this year that would end the state's Medicaid expansion, which he contends is financially unsustainable.

Although King would like to see funding for the program blocked, he noted that supporters of Medicaid expansion were able to win passage for the appropriation last year year through an unusual maneuver.

To appease Medicaid expansion opponents, lawmakers included a provision in the bill that called for the expansion to end on Dec. 31. After that bill passed with the required majorities in the House and Senate, Hutchinson used his line-item veto to remove that "sunset" provision.

"When the true financial truth can get reported about and people can be held accountable about what's really going on, then I think people will understand and change their thinking about the program," King said.