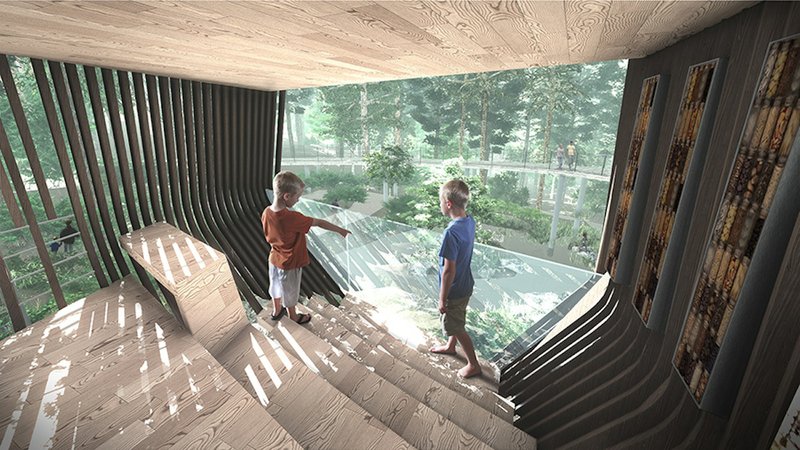 The interior of a planned treehouse at the Evans Children's Adventure Garden at Garvan Woodland Gardens in Hot Springs is seen in this rendering provided by architectural firm Modus Studio of Fayetteville.

Construction of the estimated $1 million treehouse at Garvan Woodland Gardens in Hot Springs will begin within two months, according to officials overseeing the children-focused project that doesn't have an obvious national or international peer.

The three-story suspended treehouse, designed by a Fayetteville firm to twist among pine trees, will be the latest attraction at the 210-acre public Garvan Woodland Gardens, which draws about 150,000 visitors a year, gardens director Becca Ohman said.

Bids for the construction contract will be opened Jan. 17 at the University of Arkansas at Fayetteville, according to a public notice. The gardens are considered an independent department in the university's school of architecture and design.

Groundbreaking is scheduled for March 2, and the target is to open the treehouse to the public this year, depending on delays that could arise from building a unique structure in a hard-to-access area, said Bob Bledsoe, executive director of Garvan Gardens.

Josh Siebert, co-founder of the architectural firm Modus Studio and the project's lead designer, said he looked worldwide for a similar installation and found none. Siebert said it is not only unique in how it is suspended 18 feet in the air without a readily visible anchor, but in the array of activities and implicit lessons the users, mostly children, can access.

"It is designed as a three-story treehouse unlike anything we've come across," Siebert said.

The University of Arkansas announced in October 2015 that Sunny Evans of Hot Springs and her late husband, Bob, had committed $500,000 to the treehouse project. That sum was dedicated to match individual contributions toward the total cost.

Fundraising continues. Garvan Gardens plans to use some of its fund balance to cover part of the cost and replenish the reserves with donations, Bledsoe said.

"The finances are in place to do it," Bledsoe said. "It's going to be more of a construction issue and making sure everything is done properly."

The treehouse will be the largest project at Garvan Gardens since 2006, when the roughly $5.6 million Anthony Chapel Complex was completed, Bledsoe said. Although the project's cost won't be known until bids are opened this month, Bledsoe said he anticipates it will exceed the initial $1 million projection.

Verna Garvan in 1985 donated her private gardens to the UA school of architecture, and it was opened to the public in 2002, Ohman said. Garvan, who was an "avid gardener," tended meticulously to the space for years, experimenting with techniques and floral species to see what could "survive or thrive in the Ouachita Mountain forest," Ohman said.

Garvan Gardens, which covers more than 4 miles of wooded Lake Hamilton shoreline, is home to an array of tulips, wildflowers, azaleas, native shrubs, an Asian garden and other floral varieties. Unique bridges guide visitors through the gardens, which also include a waterfall, pavilion and the chapel.

The treehouse will sit inside the the 1.5-acre Evans Children's Adventure Garden, which includes wading pools, a maze of rocks and a cave.

"We really wanted to introduce the magic of being in the canopy of the trees," Ohman said. "It gets you into another world."

Close to a dozen interactive exhibits will be built into the treehouse, allowing users to learn about stumps, roots, pollination and the timber industry, for example, Ohman said.

A sense of mystery will accompany the treehouse when visitors first arrive and try to discern how it's being held in place, Siebert said. The bending structure will not be anchored to nearby trees because they are too sensitive, Siebert said.

"It doesn't necessarily have stilts or structure that immediately cues you in to how it's being to suspended," Siebert said. "It is going to feel like it floats in the canopy."

It's also difficult to pin down how long the structure can be expected to withstand nature.

"Our hope is that ... it would last 20 to 40 years or more, [if] it's maintained properly and used properly," Siebert said. "It's definitely not temporary, but we also accept that architecture in nature, it does require a certain level of care to stay as pristine as you want to make it." 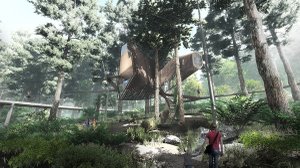 Photo by MODUS STUDIO
A planned treehouse at Garvan Woodland Gardens in Hot Springs, visualized in this rending, would allow up to 40 visitors inside at a time to explore dendrology, or the study of trees, in a natural environment.