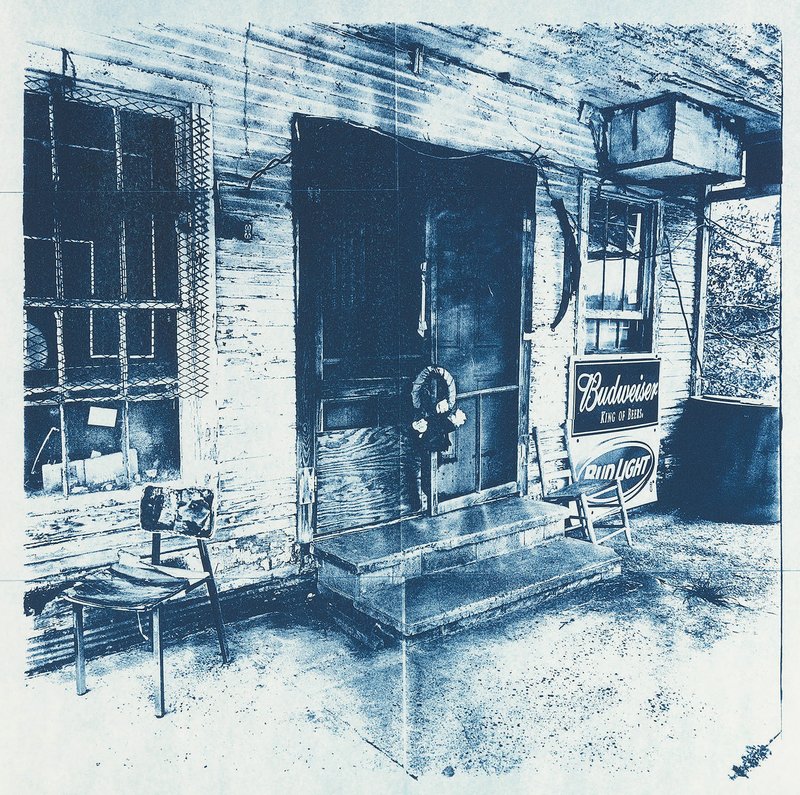 Hot Spring artist Beverly Buys will display several cyanotype photographs from her Delta in Blue series in the Arkansas Artists Retail Gallery at the Butler Center for Arkansas Studies in Little Rock. Among the photographs is this one, which she titled Shadden’s Bar-B-Q, Closed for Business. The old building is on U.S. 49 in Marvell in Phillips County.

HOT SPRINGS — Beverly Buys retired in 2014 after teaching photography for 20 years at Henderson State University in Arkadelphia. Among her retirement plans was “to make art.” Since then, the Hot Springs native has developed her Delta in Blue series, which she started in 2011, to include 45 cyanotype photographs that depict life in the Arkansas Delta.

In 2016, Buys received help from the Arkansas Committee of the National Museum of Women in the Arts and was given the Polly Wood Crews Scholar Award, which included a $2,000 stipend to further her work.

Buys will display eight of those images from the series in the upcoming Arkansas Committee Scholars Exhibit that will open Friday at the Butler Center for Arkansas Studies in Little Rock. Two other Scholar Award recipients will also show their work: Robin Miller-Bookout of North Little Rock, who was the 2015 Scholar Award recipient, and Maxine Payne of Greenbrier, who received the award in 2013.

Barbara Satterfield of Conway, exhibit project manager, said the Arkansas Committee established the Scholar Award in 1995. She said the Arkansas State Committee of the National Museum of Women in the Arts is an affiliate of the national museum, which is dedicated to celebrating the creative contributions and accomplishments of women in the arts. The museum is in Washington, D.C.

Buys and the other two artists will be honored during 2nd Friday Art Night receptions, set from 5-8 p.m. Friday and again Feb. 10, in the Arkansas Artists Retail Gallery at the Butler Center. Normal gallery hours are 9 a.m. to 6 p.m. Monday through Saturday. The exhibit and receptions are free and open to the public. Buys said she will attend both receptions.

She said she used the award money to buy film, chemicals and supplies.

“Delta in Blue began as a casual interest in the picturesque views one typically notices in the Arkansas Delta,” Buys said. “There is no shortage of white frame churches, lonely cemeteries, dilapidated houses and farm buildings, and quirky window displays and signage. The endless highways and dirt roads crisscrossing the agricultural landscape offer up scenes that are saturated with history and have filled me with curiosity — enough so that not only my art but my travel, reading and intellectual pursuits have been focused on the history of the Arkansas Delta these past five years.

“During my scholarship year, I added 15 new images to the overall number of 45 images in the series,” she said. “Delta in Blue is my interpretation of the Arkansas Delta. It is what the region looks like during an interim of the delta’s history. I am documenting a time marked by the remnants of the mid-20th century and its remains. The scene is fleeting as nature reclaims abandoned structures and as the beautiful old ruins become reclaimed as progress and regeneration come to the area.

“I attempt, with my photographs, to capture something of the essence of the lives that inhabited the harsh delta environment and pay tribute to the steadfastness that is required to make a living from the rich soil of the delta. The absence of people in the photographs, as well as the ‘window frame’ that seems to float between the observer and the depicted scene in my images, offers an ambiguity that allows viewers to project their own ideas onto the scenes. The specificity of place is vague, and there are no faces or personalities to direct one’s thoughts; rather the viewers are left to interpret the work based on their own history and memories.”

Buys said the photographs are created with a handmade photographic process that includes exposing the images on film and printing them on paper that she hand-coats with light-sensitive emulsion.

“My photographic technique is a throwback to early photographic technology and supports the essence of a scene as it is remembered through time,” she said. “There is nothing slick or modern in these photographs; rather the results are more an impressionistic view that invites the viewer to consider the images more like they might when viewing a painting. The painstaking process I use is a result of image-making over time that defies the idea of photography as an instantaneous endeavor. The evidence of my process is visible in the prints and adds a layer of meaning to the images. It interjects a reference to the maker and to the craft of

Buys said the Arkansas Committee of National Museum of Women in the Arts’ support “is meaningful more than just monetarily.”

“An artist never begins a project knowing exactly what they are doing or where they are going; rather they are uncovering mysteries and learning as they proceed with a project,” she said. “In other words, we are making it up as we go along. It takes curiosity and a belief and faith in ourselves that is sometimes hard to come by.

“When an entity such as the ACNMWA shows an interest in your work and is even willing to support you in that work, it is an encouragement almost out of proportion to the actual prize. It is the knowledge that you, as an artist, are not howling in the wind without echo or acknowledgement.”

Buys said that as her year of the Crews Scholar Award comes to an end with the upcoming exhibit at the Butler Center, she will give a report to the board of the Arkansas Committee on the progress she has made.

“The project is not at its end but is close to being complete. My goals are to publish the body of work in a book,” Buys said.

“I believe the individual photographs are meaningful — some are even quite strong — but the group as a whole is greater than the sum of its parts. Seeing them all in one place at one time is a gargantuan project in terms of

presentation, but I dream of that,” she said.

“The Arkansas Committee is delighted to initiate this exhibit with the Butler Center,” said Maribeth Frazer of Warren, ACNMWA president. “We want to recognize these deserving recipients and share the amazing artwork made possible by the Crews Scholar Award with the public. It is just one way we enjoy contributing to the rich cultural life in our state.”

For more information on the Butler Center for Arkansas Studies, call (501) 320-5700 or visit butlercenter.org.