UA loses after leading by 9 late 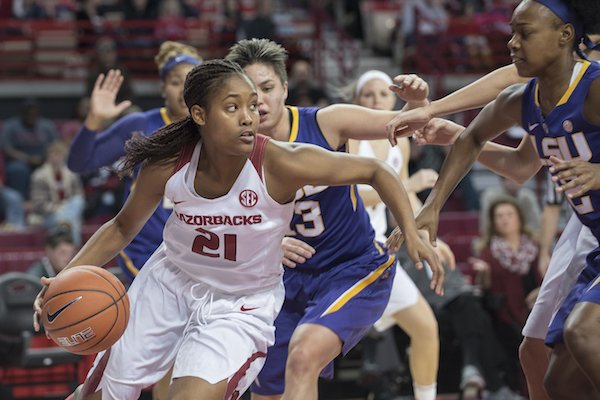 FAYETTEVILLE -- LSU rallied from an 11-point deficit in the second half and defeated Arkansas 53-52 in front of a crowd of 1,629 at Bud Walton Arena on Sunday.

Arkansas still led 51-42 when Alecia Cooley scored off a pass from Devin Cosper with 5:07 left in the women's basketball game.

But LSU forced eight turnovers down the stretch and completed the comeback after Alexis Hyder made the second of two free throws with 2.7 seconds left. Hyder went to the line after a foul was called on Cooley while LSU was trying to inbound the ball.

Chloe Jackson had 22 for LSU (13-3, 2-1) after scoring a career-high 34 points in a victory last week against Florida. Arkansas committed 26 turnovers, 18 of those coming on LSU steals, after starting the day second in the nation with 22 steals per game.

"At the half, we needed to do some soul-searching," said LSU coach Nikki Fargas, who's team trailed 29-22. "I like the fact this team didn't quit and continued to fight. We weren't going to get back in this game without our defensive pressure. We were able to turn them over, and we did a much better job of capitalizing on it in the second half."

Arkansas coach Jimmy Dykes did not hide his disappointment about the defeat in the postgame press conference. The Razorbacks (11-5, 0-3) could not close a home victory and remained winless in the SEC with road games this week at Texas A&M and Alabama.

Cosper finished with 15 points to lead Arkansas, which built a 43-32 lead late in the third quarter before being outscored 16-7 in the fourth quarter.

"It was an unacceptable effort on our part in about every area," Dykes said. "We didn't play hard, we turned the ball over way too many times, and we got outrebounded. That's not how a Razorback team is supposed to play."

Arkansas fans watched the Razorbacks blow leads to Missouri and West Virginia in football, and the men's basketball team was outscored by 23 in the second half by Kentucky in a 97-71 loss Saturday night. Now, it's the Arkansas women's team, which will attempt to regroup after a disappointing loss.

"We kept talking about our energy and our toughness, and it just never got to where it needed to be," Dykes said. "It's a game we should've won by doubles figures. I appreciate the crowd. The crowd was really good. I hope they come back and give us another chance."

Jessica Jackson, Arkansas' leading scorer on the season, was held to six points, all in the first half. Keiryn Swenson scored eight points in the first half, including two 3-pointers, to help Arkansas build a seven-point halftime lead.

Cosper took over from long range with three 3-pointers as Arkansas stretched its lead to 36-26 early in the third quarter. But Arkansas could not finish while making 13 of 20 free throws and 5 of 21 3-point attempts.

"We did some things that was uncharacteristic in the last 10 minutes, and that's very, very disappointing," Dykes said. "Almost half our shots were threes, and that's way too many."

Arkansas will return from its road games at Texas A&M and Alabama to face Vanderbilt on Jan. 19.