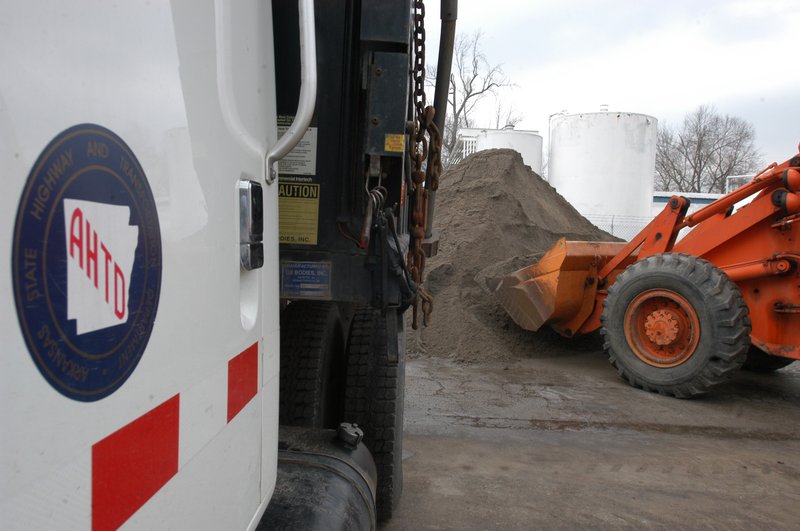 FILE — Workers with the Arkansas Highway and Transportation Department load a spreader truck with a mixture of salt and sand in this 2006 file photo.

The Arkansas Highway and Transportation Department is "redundant" and "antiquated." Or, rather, its name is, according to the department's director.

Changing the agency's name to the Arkansas Department of Transportation was among the recommendations made last month by the Legislative Task Force on Intermodal Transportation and Commerce, which the General Assembly first created in 2013 and reauthorized two years later.

The General Assembly, which opens its 91st regular meeting today, would have to pass legislation for the name change to happen.

But times have changed. Again.

Act 192 of 1977, enacted by the General Assembly when David Pryor was the governor, renamed the department and gave it new responsibilities that included the "authority and the duty to coordinate planning for all modes of transportation whether public or private," according to the Historical Review of the Arkansas State Highway Commission and the Arkansas State Highway and Transportation Department, published by the department in 1992.

"When you look at the name of the department, we are a highway and transportation department," Bennett said at a special meeting of the Highway Commission last week. "Well, highways is transportation so it's a little bit redundant."

Bennett said changing the name is logical and timely. It also would provide the agency an opportunity to re-brand itself and wouldn't cost an exorbitant amount of money, he said.

The name roll out, Bennett said, will be done gradually, particularly on the hundreds of vehicles the department has.

A new logo that's camera ready can be developed in-house and sent out to make new stickers for the sides of the vehicles and only placed on new vehicles.

The same can be done with hats and jackets employees wear in the field, Bennett said.

As for stationery, the department no longer purchases paper and envelopes with its logo.

"We don't buy separate letterhead that has an AHTD logo anymore," Bennett said. "It's just printable from the computer."

The department also has its own sign shop for new signs, which he said also will be phased in over time.

"We can phase in the signs, the logos on vehicles, things like that," Bennett said. "The cost really ought to be very, very minimal.

"I think it gives us a chance to re-brand ourselves."

"It's pretty antiquated," Bennett said of his agency's name.

"Not quite half have responsibilities for highways, transit, rail, air and water, which is what we would be if you brought aeronautics and waterways under this umbrella," Bennett said. "But that is not the recommendation."

The Arkansas agency is one of six state agencies, including the District of Col­umbia, that have responsibilities for highways, rail and transit.

The others are the North Dakota, Oregon and South Carolina transportation departments and the Nebraska roads department.