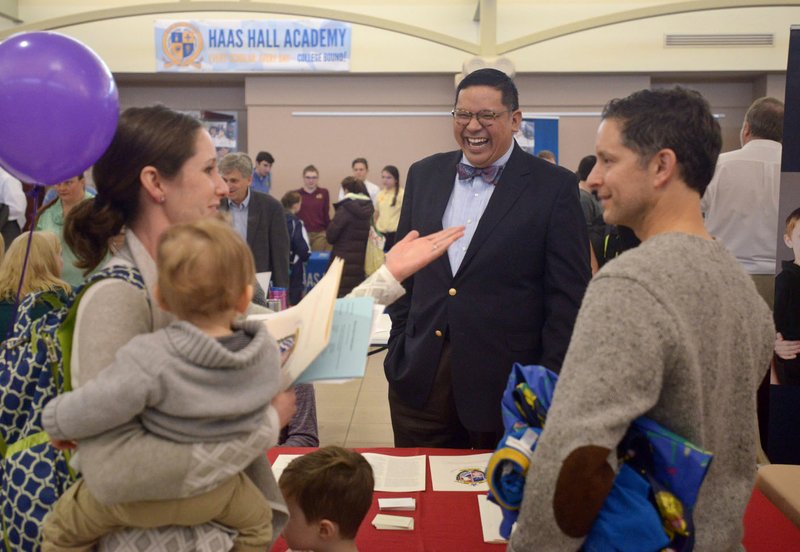 John Rocha, Ozark Catholic Academy head, talks to Mundo Harbaugh (right) and wife Jennifer Harbaugh with sons Henry Harbaugh, 4, and Leo Harbaugh, 15 months, of Rogers on Saturday during the Northwest Arkansas School Choice festival at the Jones Center in Springdale. The academy plans to open in the fall of 2018 in the Springdale or Tontitown area. The event, held as part of National School Choice Week, was an opportunity for families to learn about Northwest Arkansas private, public and charter schools, home-school groups and other education resources. (NWA Democrat-Gazette / BEN GOFF • @NWABENGOFF )

SPRINGDALE -- A festival gave parents a chance to meet officials from charter schools, private schools, traditional school districts and other education groups in one spot. 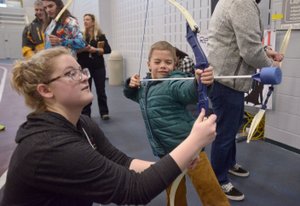 Photo by BEN GOFF • @NWABENGOFF / NWA Democrat-Gazette
Kayden Schein with District 12 Archery Tag, shows Noah Zielske, 7, of Rogers how to use a bow Saturday during the Northwest Arkansas School Choice festival at The Jones Center in Springdale. The event, held as part of National School Choice Week, was an opportunity for families to learn about Northwest Arkansas private, public and charter schools, home-school groups and other education resources. 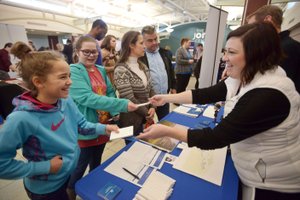 Robert Shirkey and Tina Jimenez have daughters in the fourth and sixth grades at Northwest Arkansas Classical Academy, a public charter school in Bentonville, but they are intrigued by Thaden School, a private school opening in August in Bentonville for 120 students in the seventh and ninth grades.

• Haas Hall Academy in Bentonville, Fayetteville and starting in August, Springdale and Rogers

• The New School in Fayetteville

• The Thaden School, opening in August in Bentonville

• The Grace School in Fayetteville

• Ozark Catholic Academy, opening fall 2018 in a location to be determined.

The dates for National School Choice Week are Jan. 22-28. A school choice rally follows on Jan. 25 in Little Rock.

Organizers of the Springdale event invited representatives from most area schools, including public charter schools, traditional public schools, private schools and home school organizations, Holaway said. Bentonville and Fayetteville were the only traditional school districts among the 16 schools with booths. The event also included other education-related organizations.

The event was the first of its kind in Arkansas, an idea likely to catch on in other parts of the state, said Kelly McLaughlin, an Arkansas Department of Education program adviser to school districts seeking some of the same flexibility as charter schools.

After speaking with Thaden School officials, Shirkey thought the school would take a balanced approach with the sciences and math and the humanities, he said.

"They're going to grow food and have an agricultural patch," Shirkey said.

While working on a report for state officials, Holaway and Martin Schoppmeyer, founder and superintendent of Haas Hall and of the NWA School Choice organization, saw a need for schools to collaborate and developed a plan for schools to promote each other, she said.

One goal is for different types of schools to learn how they can support one another and share resources, Holaway said.

Representatives from area schools exchanged business cards, and the event helps schools understand how they fit in the larger education landscape of Northwest Arkansas, said Lisa Herschbach, director for the ninth through 12th grades. The Bentonville school will begin with two grades but will expand to a school of 640 students in sixth through 12th grade by the 2020-21 school year.

"The community is growing," Herschbach said. "Options for education also grow. It's exciting."

Thaden School staff will design curriculum to prepare students for college and to help them think expansively about what they want to do after high school, said Herschbach, who was director for the McGraw Center for Teaching and Learning at Princeton University. Students also will have learning activities related to an outdoor stream and agricultural space.

Many parents asked Susan Provenza, Northwest Arkansas Classical Academy headmaster, questions about the charter school's mission, the curriculum and the selection of students through a lottery. The Bentonville charter school for the first time will serve kindergarten through its first class of seniors in the 2017-18 school year.

"This gives them a chance to see all of us," Provenza said. "We focus on classical and liberal arts, character and virtue."

Schoppmeyer and Fayetteville Superintendent Matthew Wendt are in ongoing conversations in the interest of working together, Wendt said. District representatives included the directors of the district's new Fayetteville Virtual Academy and of gifted and talented education.

"With the options already in existence, it only makes sense we, as a choice, are in the room," Wendt said. "I look forward to outgrowing the Jones Center and other school districts being a part of showcasing their success and collaborating with us."

Springdale mom Charisma Henderson sought information about prekindergarten and kindergarten for her 4-year-old daughter. She liked the opportunity to meet school officials in person and to hear about their missions and values.

Henderson grew up in public schools, but wants a non-traditional approach for her daughter that will push her to think, challenge her in the sciences and math, and that ties into the real world.

"I would like more of a creative, hands-on type of school," Henderson said.