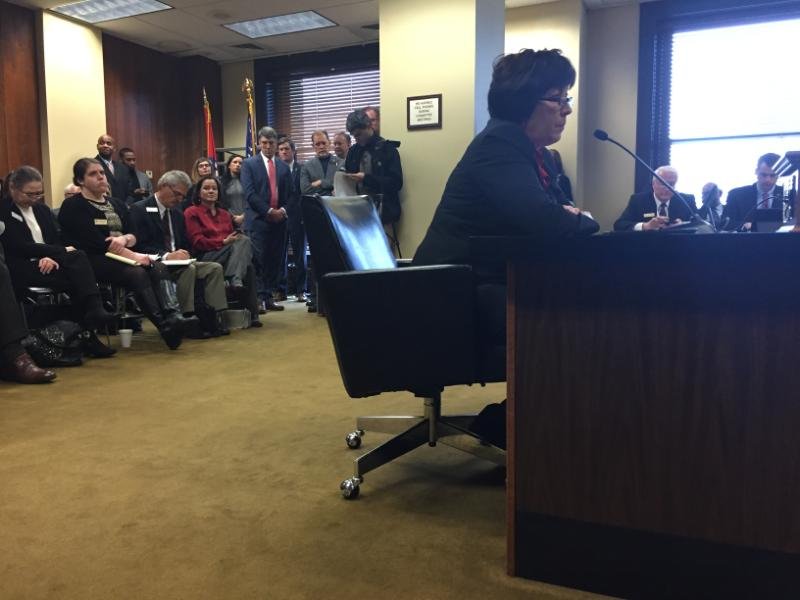 After a state lawmaker fielded questions and criticism Tuesday regarding her plan to ban Arkansans from using food stamps to buy junk food, legislators passed the bill along to the General Assembly.

Rep. Mary Bentley, R-Perryville, filed the bill, HB1035, in December to create the Healthy Food Improvement Act, which would reduce what people are allowed to buy with their allotments from the Supplemental Nutrition Assistance Program, known as food stamps.

The representative advocated for her bill Tuesday in front of state House members on the Public Welfare, Labor and Health Committee. Bentley said that when she was drafting the legislation, she asked herself what could be done to make a difference in the health of Arkansans.

She went on to say the state ranked 48th in the nation in overall health and claimed the most popular foods bought on SNAP benefits were junk food such as soda and candy. She called the bill “common-sense legislation that will actually make a difference,” adding that the state's Health and Human Services departments would help hammer out the guidelines on what qualifies as unhealthy food.

“I want the kids in our state to have sippy cups full of milk and juice, not Mountain Dew and Pepsi,” Bentley said.

The panel of legislators asked Bentley about the financial commitment of the bill and its potential to help — or hinder — poor Arkansans.

Rep. Kim Hammer, R-Benton, asked Bentley if Arkansas would be the first state to propose regulations like this. The lawmaker said she knew of a few other states that took up similar proposals, but that Arkansas would be a “pioneer.”

“We will see legislation across the nation” like this, she added.

After applauding Bentley for raising awareness on the state’s obesity rate, Rep. Stephen Magie, D-Conway, said he wondered if the bill would become an “unfunded mandate” on grocery stores that would require them to create new, costly systems to enforce it.

“I’ve got a lot of comments from the grocery industry; they really don’t like this,” Magie said.

Rep. Ken Henderson, R-Russellville, also asked about the finances of the bill, inquiring if the program would likely have some fiscal effect. Bentley responded that she did not think enacting the bill would cost much of anything to the state or to groceries and convenience stores, especially because some restrictions are already in place.

Lawmakers and members of the public also discussed how the bill would affect what are known as "food deserts": areas where people do not have easy access to fresh fruit, vegetables and other healthy foods.

Former state Rep. Kathy Webb, who testified against the bill, said that these food deserts are a real problem around the state. Webb, now executive director for the Arkansas Hunger Relief Alliance, told legislators that people rely on dollar stores and convenience stores for their nutrition when their choices are limited. And eating healthy costs more money, she added, so low-income families must make hard choices every day.

“Families choose between paying rent and buying food ... between buying medicine and buying food,” Webb said. The bill as written would not alleviate those choices, she added.

After hearing public comment, the committee voted to pass the bill onto the General Assembly.