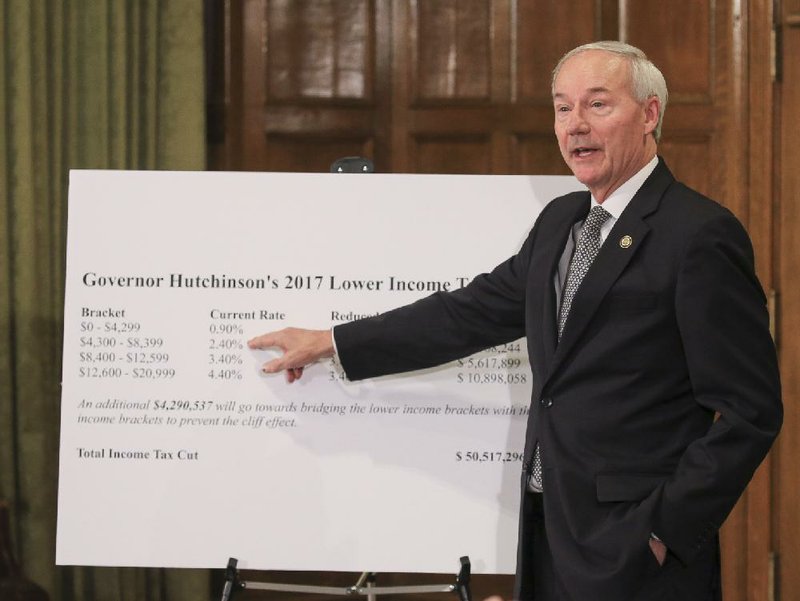 LITTLE ROCK — Arkansas Gov. Asa Hutchinson got a cool reception from fellow Republicans when he proposed a tax cut for low-income residents that was more modest than some legislators had hoped. So, he made them a pledge: Pass it now and he'll push for much deeper cuts in two years.

The Senate Revenue and Taxation Committee on Wednesday endorsed Hutchinson's $50 million proposal to cut income taxes for more than 650,000 residents making less than $21,000 a year. The full Senate on Monday is expected to vote on the tax cut, which would take effect in 2019.

The cut is less than half the reduction Hutchinson signed into law two years ago and less than what some GOP lawmakers would like, but the governor's promise to seek more comprehensive reform later has appeased key critics from his party. At least two lawmakers who had called for deeper cuts after Hutchinson proposed a task force to recommend major tax code changes by fall 2018.

"I think a lot of people see the soundness and the logic of taking care of this part of the income ladder at this point, and I think a lot people also see the wisdom of, before we make large changes that are going to be more expensive on the upper end of the tax code, let's actually do some due diligence," Senate Majority Leader Jim Hendren, who is sponsoring the tax cut, told reporters after the vote.