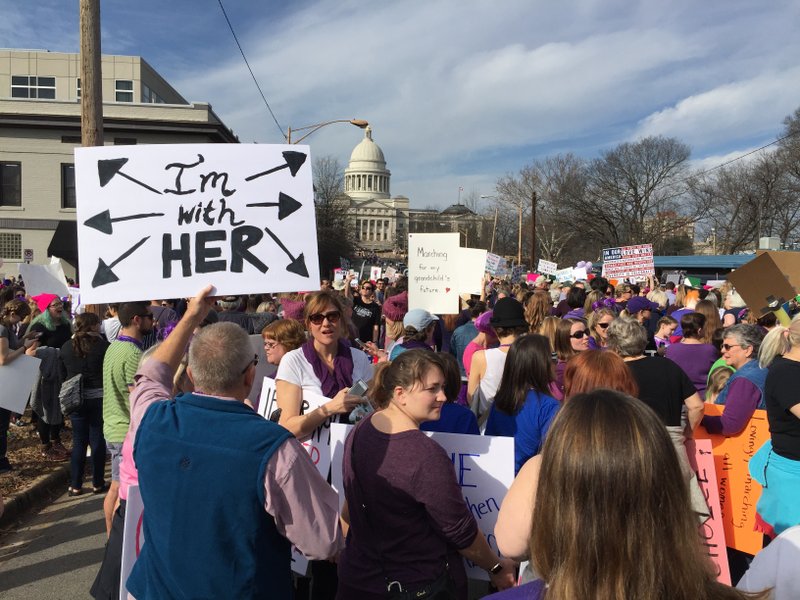 Hundreds of Arkansans flood Capitol Avenue for the Women's March for Arkansas.

Thousands of Arkansans marched to the state Capitol Saturday, a day after the presidential inauguration, to rally for women’s rights.

The demonstration, called the Women’s March for Arkansas, was part of a national and international movement, said organizer Gwendolynn Combs.

In total, 663 marches are scheduled to take place in dozens of countries, she told the crowd.

“Here’s a secret: We were the first,” Combs said.

Combs said shortly after the election she was lying in bed, depressed, and vowed to do something before she got up. So she created a Facebook event page hoping to galvanize a hundred or so local activists to march on Jan. 21.

The group that put on the march estimated in a Facebook post around 7,000 people were in attendance. An exact count was not immediately available.

As Combs said this into the microphone, the audience laughed. The hundreds of Arkansans who arrived at the intersection of Capitol Avenue and Pulaski Street filled up blocks of the roadway, then spilled over into side streets. An official count was not immediately available.

Combs rattled off the tenants of the Women’s March movement, and each statement was peppered with cheers: Women’s rights are human rights, she said. Take action, she said.

And “defending the most marginalized among us is defending all of us,” she said.

Combs addressed a diverse group of attendees decked out in purple T-shirts, scarves, dyed bangs and beards, face paint, tutus and even a couple of stilts.

One woman dragged a mannequin bust in a small shopping cart outfitted with a sequined sash that read “Respect.” Six women from an immigrants rights group held a banner with portraits of icons Frida Kahlo and Selena emblazoned with the word “Chingona” in purple script.

It means “a badass woman,” said Michel Rungel. It took two weeks to paint and three hours for them to get to Little Rock from Fayetteville.

Though people walked side by side, the reasons they marched varied. One man, Richard Starks, said he did not fit the typical mold of a demonstrator.

He wore a camouflage baseball cap that matched his tucked in camouflage T-shirt, except perched on top of the hat were two furry kitten ears and the word “Power” written in glitter letters. A co-worker made it, he said.

He came, Starks said, because he’s a “redneck” from rural Arkansas who hunts, enjoys guns and still believes “everybody needs to be treated fairly.”

“I’m not coming out here to protest anything. I’m here to be ‘pro,’” Starks said. “Pro people.”

Marcher Jessi Clark said she strayed from her activist roots before the election. But seeing people she barely knows come together reminded her that without protest, “I’m not using the power that I have,” she said.

Anna Pandya and her husband, Jay, watched the crowd balloon in size from the porch of Frances Flower Shop on Capitol Avenue.

Pandya, who researches cancer at the UAMS Medical Center, is from Poland. Her job and her upbringing brought her to the march, she said.

Pandya said she remembers living in a communist country under Russian control, and she said she cannot understand why President Donald Trump would want to support that regime.

“Now we are scared. We are uncertain,” Pandya said.

For demonstrator Natalie Canerday, an actress from Russellville, there were too many reasons to summarize why she marched Saturday. She sighed and said she felt like she "had to."

She does not have any money or wield any power, but what she can do is show up, she said. After the march, Canerday will go home and write members of Congress, urging them to “take care of us.”

“Or better yet,” she said, “let us take care of ourselves.”

*CLARIFICATION: A previous version of this story contained an early estimate of the crowd total. It has been updated with new information.

*CORRECTION: An earlier version of this story misstated the number of countries where marches were planned.