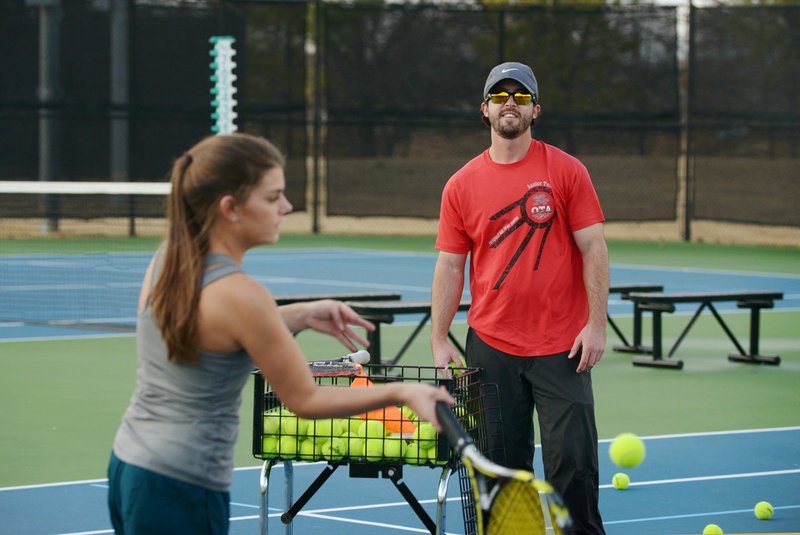 Beau Basham (right) with Bentonville Parks and Recreation gives Sam Keiser of Bentonville a tennis lesson Thursday at Memorial Park in Bentonville. The park’s tennis courts were built with money from a $110 million bond measure approved by voters in 2007. The bond money could be exhausted as early as 2020, said Mayor Bob McCaslin. “That would be a reasonable time to start looking at alternative funding sources,” he said.

BENTONVILLE -- Some city departments will be able to use impact fees to help pay for capital improvement projects in the future, but the city will likely have to seek alternative sources once the last of the 2007 bond money is used, according to city officials. 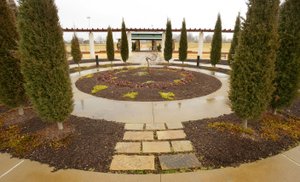 Photo by BEN GOFF • @NWABENGOFF / NWA Democrat-Gazette
Orchards Park in Bentonville was built with money from a $110 million bond measure approved by voters in 2007.

The bond money could be exhausted as early as 2020, said Mayor Bob McCaslin.

Below are a list of projects the bonds approved in 2007 have either paid for or have helped paid for over the last decade. Some projects haven’t been completed yet, but bond money has been committed to them.

"That would be a reasonable time to start looking at alternative funding sources," said McCaslin, who has said he will not seek re-election in 2018.

The $2.5 million left for the Fire Department will not be issued as the city will forgo that debt. All the money for the parks system and municipal airport has been used or is committed.

Voters were concerned about streets, parks and public safety, McCaslin said of the atmosphere in 2007. There also was talk of giving the municipal airport more life.

The recession that started in 2008 allowed the city to complete some projects at a "tremendous savings," the mayor said.

"We've been very fortunate with all that we've been able to do with those proceeds," he said. "I thank the voters for trusting us to do that with their money."

The city will need to consider additional debt, especially when the Eighth Street Improvement Project wraps up in a few years, McCaslin said.

"That would mean additional bond issuance," he said. "At the price of improvements, it's just almost impossible to make significant gains on your capital improvement deficits of paying as you go. You just about have to have a pool of resources to work out of so that you can set plans in place and attack those and then begin your payback."

Some departments will be able to use impact fees, which were adjusted in August, to help with capital improvement projects. The adjustments included increasing the park impact fees from $791 to $2,192 for single-family homes and reinstating the police impact fees to $546 per single-family home. Impact fees are one-time payments collected before a certificate of occupancy is issued for a building.

The Police Department plans to use impact fees as well as its remaining bond money to build a facility behind its station on Southwest 14th Street that will house the dispatch center and offices, officials have said.

The National League of Cities lists public-private partnerships as an "emerging tool" for cities to use when trying to pay for infrastructure projects in its "Paying for Local Infrastructure in a New Era of Federalism" report. The group is an advocacy organization "devoted to strengthening and promoting cities as centers of opportunity, leadership and governance," according to its website.

Public-private partnerships are arrangements between government agencies and the private sector where both parties contribute financially and share in the risk and reward, the reports states.

Arkansas is one of 32 states permitting public-private partnerships, according to the report.

Bentonville has benefited from public-private partnerships, especially with its trail system as the Walton Family Foundation has fully or partially paid for about 18 miles of the city's 30 miles of hard surface trails, according to Wright.

Wal-Mart has also already pledged $12.5 million to help pay for the Eighth Street Improvement Project, which is estimated to cost well over $70 million.

The project will include widening Eight Street from Walton Boulevard to Interstate 49 and includes a interchange. It will give Wal-Mart employees direct access to the interstate. Workers recently began moving utilities for the project.

There was about $3.5 million in the general fund annually for street projects before the 2007 bond approval.

"In my business, that doesn't get you much," he said.

It would have taken more than 24 years for the city to get to the 17 projects -- including the downtown square renovation, the widening of Southwest I Street, East Central Avenue improvements and the widening of Arkansas 12 -- that the bonds paid for or helped pay for, he said, when dividing the $85 million in bonds by the $3.5 million the street department annually received.

The bonds were beneficial because they provided enough money to allow multiple projects to be in motion at the same time, Churchwell said.

"Where before, if you could get one project a year out of that money, you were good," he said.

It also freed the $3.5 million other departments could use, he added.

Churchwell, who will retire Jan. 31, said he doesn't know what mechanism will be used to pay for streets once the bond money is exhausted.

"The need is still going to be there as the city grows," he said.

The city used the $15 million bond issue allotted to the Parks and Recreation Department to pay for or help pay for 16 projects, six of which helped at Memorial Park with amenities such as four sand volleyball courts and 12 tennis courts, adequate parking lots and other improvements and renovation.

Pocket parks, such as Gilmore and Austin Baggett parks and a playground at Park Springs Park, enhanced the green space downtown. The Downtown Activity Center was built and opened in 2011, giving residents a go-to point for recreational activities and programs.

The last of the parks bond money was used to help foot the $16.1 million bill for the Bentonville Community Center in the city's southwest corner. The center opened in June 2015.

"That bond, from a parks standpoint, it's a lot more than just some new parks and trails," Wright said. "It was really a rebirth of a Parks and Recreation Department."

The money allowed the department to offer more than 140 recreation programs and see about 2 million people in its public parks annually, he said, adding it's the use of the facilities and amenities the bonds paid for making the bonds so successful.

"The bonds gave us the opportunity to dream," said Scott Eccleston, director of operations at Crystal Bridges Museum of American Art, former Parks Advisory Board member and a planning commissioner.

"I don't think any of us, even in 2007 we knew we had growth needs, but I don't think any of us really envisioned all of the great things that would be happening to and within our city in the decade to follow that election," McCaslin said, adding the opening of Crystal Bridges Museum of American Art in November 2011 was another catalyst for tourism and development.