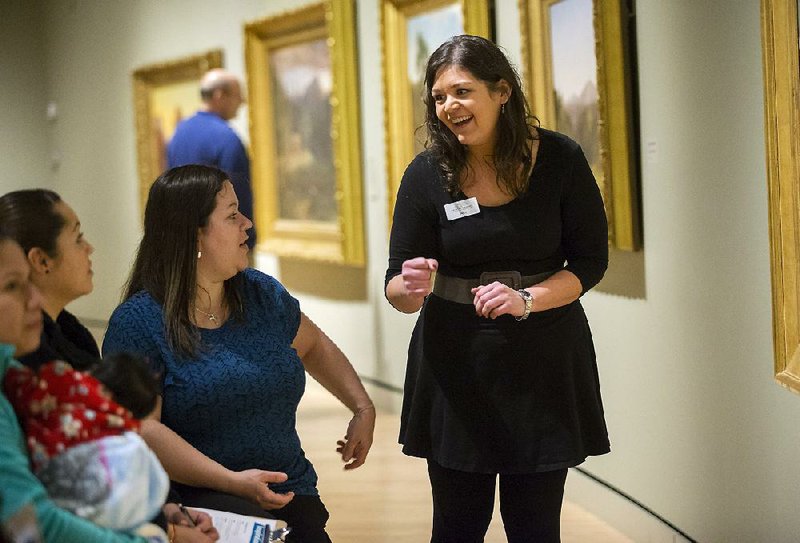 Crystal Bridges Museum of American Art built its foundation on the idea of access for all, and the museum is taking steps to continue living up to the mission this year.

Executive Director Rod Bigelow said the Bentonville-based museum is widening the scope of its diversity and inclusion efforts, some of which will be apparent to museum visitors in a pair of recent acquisitions and the first full-scale bilingual exhibition, which will open next month. Crystal Bridges also has hired additional staff focused on diversity and inclusion and developed more services as part of its community outreach programs.

Bigelow said the extended efforts -- along with the museum's continued work with ongoing programs -- is part of a sharpened focus on diversity and inclusion.

"This is going to be an important strategic effort for Crystal Bridges," Bigelow said. "We think it's important because we can't truly have the access and inclusion mission without having a team that is reflective of our community. We can't do it without having a collection that's reflective and programming that's reflective. And so all of those things need to have more of an important aspect, or they need to rank higher in the level of priorities that we have in the institution."

Diversifying museums -- from the workforce, permanent collections, exhibitions and programming -- has become a priority of the art establishment. The topic moved to the forefront after recent studies outlined a lack of ethnic and racial diversity, including a survey of art museum staffs commissioned by the Andrew W. Mellon Foundation in 2015.

The Mellon survey found that 84 percent of museum leadership positions -- like directors, curators, educators and conservators -- were white. Meanwhile, only 4 percent were black and 3 percent were Hispanic, which doesn't come close to representing the diversity of the U.S. population.

"On the whole I was expecting a pretty bleak picture from the point of view of diversity, and the reason we commissioned the study and wrote it up was that we wanted the museums and their leaders and their boards to have the tools to analyze this condition," said Mellon Foundation Vice President Mariet Westermann, who was co-author of the survey. "Not to be able to sit back and say, 'Well, it's not so bad.' ... It was just a little worse than I thought."

Bigelow admitted the results were "pretty bad," but the survey was a catalyst for conversation at Crystal Bridges and beyond. The Association of Art Museum Directors devoted its annual meeting to the topic last May. The American Alliance of Museums will do the same this year.

Though simply an additional job title on the surface, Westermann and Laura Lott, who is president of the American Alliance of Museums, believe it was a significant stance.

"It certainly signals to his museum and his community, and then all of the other museums that Crystal Bridges influences, a different level of importance on these issues than I think we've had in the past," Lott said. "That's a huge leadership position statement."

Crystal Bridges wants Bigelow's appointment to set the tone for its efforts across the museum.

For starters, Bigelow said the human resources department and hiring managers are challenged to develop a diverse pool of candidates for consideration when filling positions on staff. While the race and ethnicity breakdown of Crystal Bridges employees wasn't available, a spokesman said the museum has made progress and is continuing to evolve its workforce to better reflect the community.

The museum is working to cultivate future candidates with programs like a high school residential internship, which is for students who are demographically underrepresented in the museum field. The program brought 10 students from schools in Helena-West Helena to the museum for a five-week internship last year as part of a pilot program funded by the Walton Family Foundation.

Crystal Bridges also formed an access and inclusive programs department in 2015, partnering with groups like the Springdale Literacy Family Program in efforts to engage communities and new audiences. There are programs for children with autism and adults in the early stages of Alzheimer's and dementia. The museum will also begin providing sign language interpretation for all of its distinguished speaker programs.

"This museum is not just for a certain type of people. It's for all people," said Emily Rodriguez, who is associate museum educator in access and inclusive programs at Crystal Bridges. "We want everyone to feel welcome and feel like they can use the museum as an informal learning institution."

Bigelow is confident Crystal Bridges has made a mark with programming, but there is room for improvement elsewhere.

Efforts to diversify the permanent collection are evident in recent acquisitions like Alice Neel's portrait Hugh Hurd, which was announced earlier this month and will be on display next month. Hurd was an actor and civil-rights activist in the 1950s and 1960s.

Crystal Bridges also has acquired Nari Ward's wall sculpture We The People. The Jamaican-born artist's work --which is 8 feet by 27 feet -- was created in 2015 out of hand-dyed shoelaces and forms the script of the first three words of the preamble to the U.S Constitution.

Ward, an immigrant who became a naturalized citizen, works in and around New York City and often uses materials that he gathers from the streets. Curator Chad Alligood believes We The People adds depth to the collection by "exploring contemporary issues of race, poverty and inclusiveness."

"You'll see a number of acquisitions that are more inclusive," Bigelow said about future plans. "I think our collecting focus will be more pronounced in the next year, two years, three years."

The museum is taking another step in an upcoming temporary exhibit called "Border Cantos: Sight and Sound Explorations from the Mexican-American Border." The collaboration between American photographer Richard Misrach and Mexican-American sculptor and composer Guillermo Galindo will be its first full-scale bilingual exhibition.

Crystal Bridges had bilingual elements during its "Picturing the Americas" exhibition last year, but Rodriguez said everything -- labels, quotes, brochures -- will be in English and Spanish this time. The effort, in part, is a response to a 2015 Walton Quality of Life study conducted by the Walton Family Foundation, which determined that the Hispanic attendance rate at Crystal Bridges increased from 30 percent in 2012 to 62 percent in 2015.

An advisory committee consisting of Hispanic community leaders throughout Northwest Arkansas has aided Crystal Bridges during the "Border Cantos" planning process. The group meets once a month to offer feedback and guidance as the museum prepares the exhibit, which will be on display from Feb. 18 to April 24.

"They want to extend a hand to the communities that are here that live and work and make Northwest Arkansas a vibrant place to live and work," said Sonia Gutierrez, who is the founder and chief operations officer of Fayetteville-based New Design School and a member of the "Border Cantos" advisory committee. "It's an incredible recognition and acknowledgment for the Hispanic community and, really, the immigrant community."

Crystal Bridges is not alone in recognizing the importance of museums becoming more diverse and inclusive places, according to Lott and Westermann. Many other museums and institutions are working toward similar goals, developing ways to diversify staff, boardrooms and candidate pools as well as collections, programs and exhibitions. Old systems are being torn down and replaced by inclusive ones.

Westermann applauded Crystal Bridges for its response to the challenge so far.

"I'm extremely impressed in both [founder] Alice Walton and Rod Bigelow and the determination in which they go about this," Westermann said. "They really have taken this on in a fantastic way."

Bigelow said the work will continue, believing it is a necessity for "survival as an institution."

"Making sure we have an aggressive program that reaches out on a regular basis to a diverse constituency is important," Bigelow said. "If we don't reflect the community and we aren't relevant to that community, then we're irrelevant."