3 spree fits for Vandy: Commodores dangerous from outside 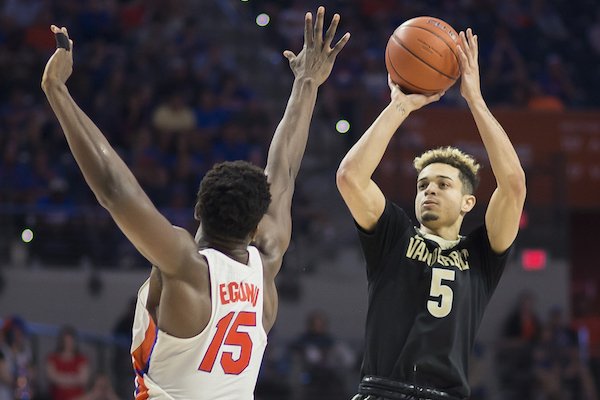 The Commodores have hit 187 of 479 three-pointers entering tonight's game against Arkansas at Memorial Gym.

Auburn, which has taken and made the second-most three-pointers in the conference, is 163 of 460.

Arkansas' 37.8 three-point percentage (123 of 325) ranks second in the SEC, but the Commodores have outscored the Razorbacks by 192 points from beyond the arc.

Earlier this season the Commodores set school and Memorial Gym records by hitting 19 of 32 three-pointers in a 90-63 victory over High Point. Seven Commodores hit at least one three-pointer.

"We have a bunch of guys who can really shoot the ball well," Vanderbilt senior forward Luke Kornet said. "It's definitely a valuable thing for us.

"It's probably not typical of a lot of teams, but it is for our team."

The Commodores have scored more points from behind the three-point line (561) than inside of it (540).

"I mean, all five of their guys that start are threats," Arkansas Coach Mike Anderson said. "They're a balanced team. They can all shoot from the perimeter."

"I think he's regained his confidence," Anderson said. "With a new coach, it takes time."

It shouldn't come as a surprise the Commodores' offensive focus is on three-pointers, considering Bryce Drew is their new coach after Kevin Stallings left for Pittsburgh after leading Vanderbilt for 17 seasons.

Drew, 42, was a first-round draft pick of the Houston Rockets and in six NBA seasons shot 37.1 percent from three-point range. As a college player at Valparaiso, he hit 43.5 percent of his three-point attempts, including a 23-footer at the buzzer that beat Ole Miss 70-69 in the 1998 NCAA Tournament.

"With our personnel, they migrate to the three-point line," Drew said. "They're very good three-point shooters.

"Teams will game plan against that, and they have been, to take away our threes, do we have to come up with other ways to score or other ways to create three-point shots. I think in the last couple of games our guards have done a good job getting into the lane and shrinking the defense so we can score at the rim some."

Regardless of what opposing defenses try, the three-pointer remains a staple of Vanderbilt's offense as evidenced by the Commodores hitting 10 of 25 attempts in their 68-66 victory at Florida last Saturday, including 3 of 4 by LaChance of 3 of 5 by Kornet.

Kornet said Drew has a positive approach with his players taking three-pointers.

"He definitely embraces it unless we're taking bad shots," Kornet said. "But if your offense is flowing well and people are making shots, he'll want us to keep doing it."

"When you have guys on the perimeter that all have to be guarded like Vanderbilt does, it really makes it tough on you defensively," Auburn Coach Bruce Pearl said. "Because you've got to account for everybody."

Alabama Coach Avery Johnson, a former NBA player and coach, said how Kornet, 7-1, shoots three-pointers reminds him of how he used 7-0 Dirk Nowitzki with the Dallas Mavericks against the Houston Rockets' 7-6 Yao Ming.

"We couldn't handle Yao Ming inside," Johnson said. "So I said, 'OK, we're going to force you outside and get you out of the paint with Dirk's three-point shooting.'

"Kornet presents those same challenges of making big guys move further and further away from the basket to have to deal with his three-point shot."

Anderson said the Razorbacks will use 6-10 Moses Kingsley and their other post players to challenge Kornet on the perimeter when necessary.

"We've got to be out there with him and hopefully make him uncomfortable," Anderson said. "We can't sit there and let him spot up."

The Commodores average 10.6 made three-pointers in SEC games.

"We have to do a much better job of guarding the perimeter, because we've had teams that really kind of torched us," Anderson said. "We have to be at our best on defense."