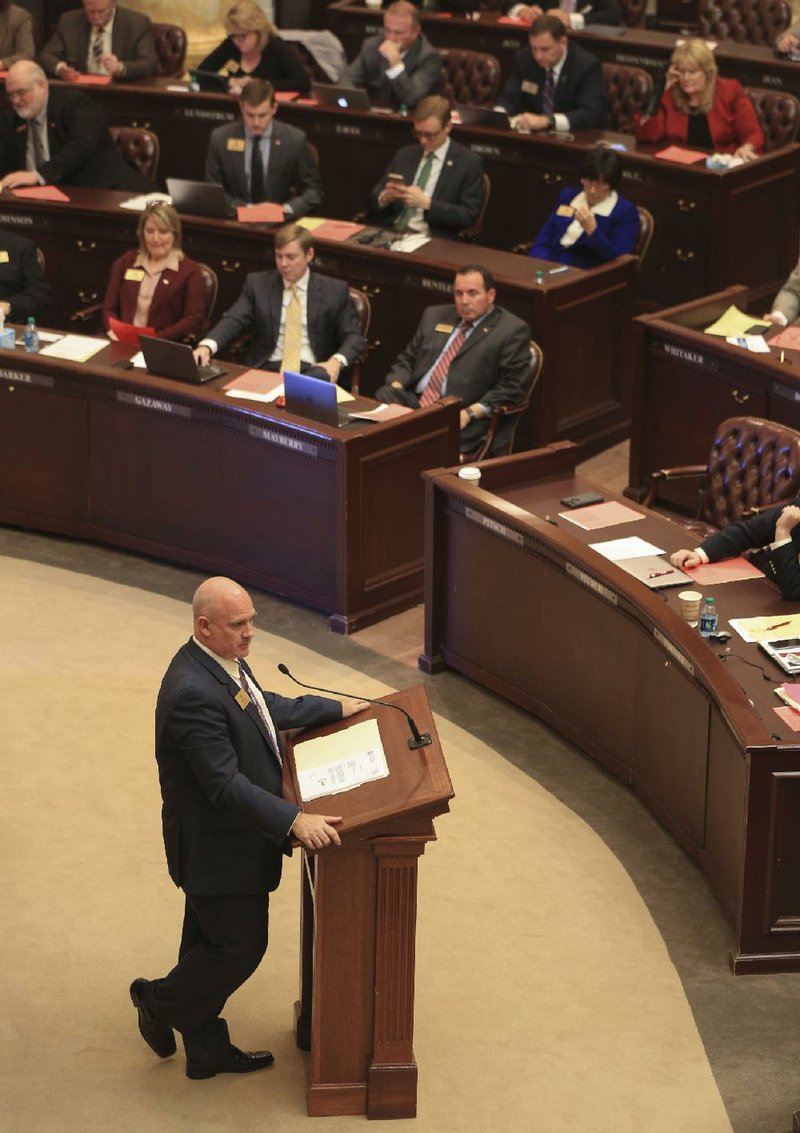 Rep. Mathew Pitsch speaks Monday on the House floor as he presents the governor’s tax-cut bill.

Both chambers of the Legislature handily approved identical bills Monday that would enact Gov. Asa Hutchinson's plan to cut individual income tax rates for Arkansans with incomes below $21,000.

The legislation would cut taxes for 657,000 Arkansans with less than $21,000 in taxable income, including 120,000 people in the lowest tax bracket who no longer will pay state income taxes, according to lawmakers.

Rep. Josh Miller, R-Heber Springs, and John Walker, D-Little Rock, were the only lawmakers to vote against HB1159.

Sabin, who met with the governor Monday afternoon, said he expects to present his bill to the full House's 76 Republicans and 24 Democrats.

Hutchinson spokesman J.R. Davis said there is no room for a compromise with Sabin on the governor's tax-cut plan because Hutchinson is focused on cutting individual income taxes and his plan "is the right thing to do and at the right time."

HB1159 and SB115 would become effective for tax years starting on or after Jan. 1, 2019. The measures are projected to reduce state general revenue by $25.25 million in fiscal year 2019, which starts July 1, 2018, and $50.5 million each year thereafter, according to the state Department of Finance and Administration.

Hutchinson thanked legislators for their bipartisan support and leadership in passing the legislation.

"This is yet another step to further decrease the tax burden on hard-working Arkansans and make our state's income tax rates more competitive with surrounding states," the Republican governor said in a written statement.

Monday's action comes after the 2015 Legislature enacted Hutchinson's plan to reduce individual income tax rates for Arkansans with taxable income between $21,000 and $75,000. That law has been projected to reduce state general revenue by about $100 million in fiscal year 2017, which started July 1.

During the first six months of fiscal year 2017, the state's net general revenue available for state agencies is $8.8 million below the state's forecast, partly because of lagging sales-tax collections. But state officials have said that they expect sales-tax collections to rebound during the last half of fiscal year 2017, and they don't plan to cut their general revenue forecast.

"Our governor wanted to get this tax cut out, but he wanted to show commitment to doing real tax reform in our state," Pitsch told representatives Monday.

The task force the bills would create would be required to file its final written report with the governor, the House speaker and the Senate president pro tempore on or before Sept. 1, 2018, in advance of the 2019 regular session.

The creation of the task force has placated some lawmakers who favor a larger income tax cut, particularly for Arkansans with taxable income exceeding $75,000.

Pitsch replied that his legislation does not pertain to government benefits.

Pitsch said he was unfamiliar with the numbers Hendren referred to.

The bill is projected to reduce general revenue by $40 million in fiscal 2018, which starts July 1, according to the finance department. Sabin said last week that he proposed his bill "knowing that there is an opportunity to amend it if we want to make it comparable to the governor's proposal and have it delayed until fiscal 2019."

The largest tax cut a single taxpayer could receive is $156 and a married couple could receive a $312 tax cut, the finance department said.

Hutchinson has proposed exempting income taxes on military retirement benefits for about $13 million-a-year as part of a larger $19 million a year plan plan to cut two taxes and modify three tax exemptions.

Some lawmakers have objected to Hutchinson's proposal to apply sales tax to the full cost of manufactured housing, which would raise about $2.4 million a year. The sales tax is now applied to 62 percent of manufacturing housing costs.

Instead of changing the manufactured housing sales tax exemption, Senate Revenue and Taxation Committee Chairman Jake Files, R-Fort Smith, said Monday that he expects an amendment to be added to English's bill to allow for sales tax to be charged on movies, music, and books that are digital downloads.

"In comparison, tax is charged in stores on these items at purchase," Files said.

Republican Lt. Gov. Tim Griffin, who presides over the Senate and breaks the rare tie votes in the chamber, said he supports legislation exempting military retirement benefits from income taxes "100 percent," but "we are already overtaxed, so we should not raise taxes by taxing another human activity."

Governmental changes, such as decreasing budget growth to the level of inflation, could pay for the reduced tax revenue, he said in a statement.

Hutchinson has proposed a $4.48 million general revenue budget for fiscal year 2018 -- a $153 million increase over fiscal year 2017 with most of the increased money targeted for the Department of Human Services. 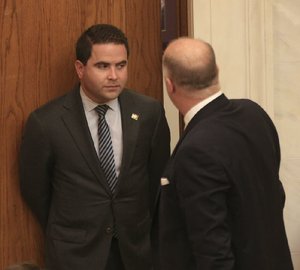 Photo by Staton Breidenthal
Rep. Warwick Sabin (left), D-Little Rock, talks with Rep. Joe Jett, R-Success, on Monday on the House fl oor. The House did not vote on Sabin’s bill to create an earned income tax credit for low-income Arkansans, offered as an alternative to the governor’s tax-cut bill that the House approved.

The calendar of public events of the 91st General Assembly for today, the 16th day of the 2017 regular session.

Upon adjournment of House and Senate: Performance Evaluation and Expenditure Review Subcommittee of Joint Budget Committee, Room B, Multi-Agency Complex.