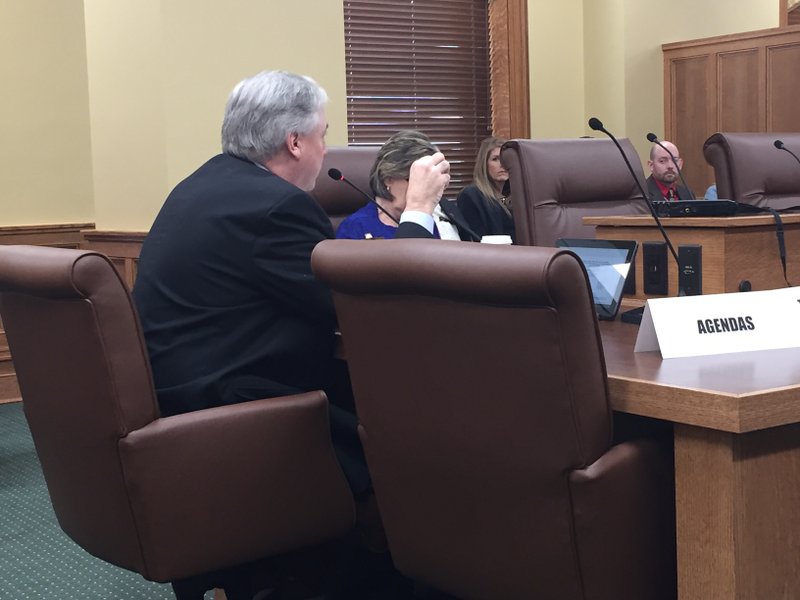 Rep. Mark Lowery, R-Maumelle, speaks about the voter ID proposal at a meeting of the House State Agencies and Governmental Affairs Committee on Wednesday, Jan. 25.

LITTLE ROCK — An Arkansas House panel has backed a proposal to reinstate the state's voter ID law that was struck down more than two years ago, moving forward with the restriction months after Republicans expanded their majorities in the Legislature.

The House State Agencies and Governmental Affairs Committee, after hearing public comment from Arkansans, endorsed the proposal Wednesday requiring most voters to show photo identification before casting a ballot. The measure now heads to the House.

State Rep. Mark Lowery, R-Maumelle, told the panel Wednesday that the measure, House Bill 1047, is not focused on specific instances of voting fraud.

Instead, Lowery said, it is largely intended to grapple with an "eroding lack of confidence in the electoral process" brought on by perceptions of manipulation at the voting booth.

"This has been crafted very carefully to make sure that we're not adding another qualification to voting — that we're really just clarifying the registration process," he told the committee.

The Arkansas Supreme Court in 2014 struck down the state's voter ID law as unconstitutional. The latest proposal is aimed at addressing a concern three of the court's seven justices raised that the prohibition didn't pass with enough votes in the Legislature when it was enacted in 2013.

"We owe it to the people of Arkansas to attempt this," the lawmaker said when pressed on possible legal ramifications this time around and not affording residents the opportunity to vote on the restriction. "We're talking about sort of kicking the can down the road, whereas the integrity of the ballot needs to be done now."

Fellow lawmaker Warwick Sabin, D-Little Rock, questioned Lowery on his view that the law would be in keeping with identification requirements in place for other commonplace activities such as boarding planes and touring government buildings.

"Those aren't constitutionally protected rights," Sabin said, adding that the bill adds unnecessary steps to what should be a "basic and accessible right."

Lowery rebutted that the law would not create restrictions, and would instead add "options for the voters" going to their respective polling places.

The voter ID measure will require a two-thirds vote in the House and Senate.

Information for this article was contributed by The Associated Press and Brandon Riddle of Arkansas Online.