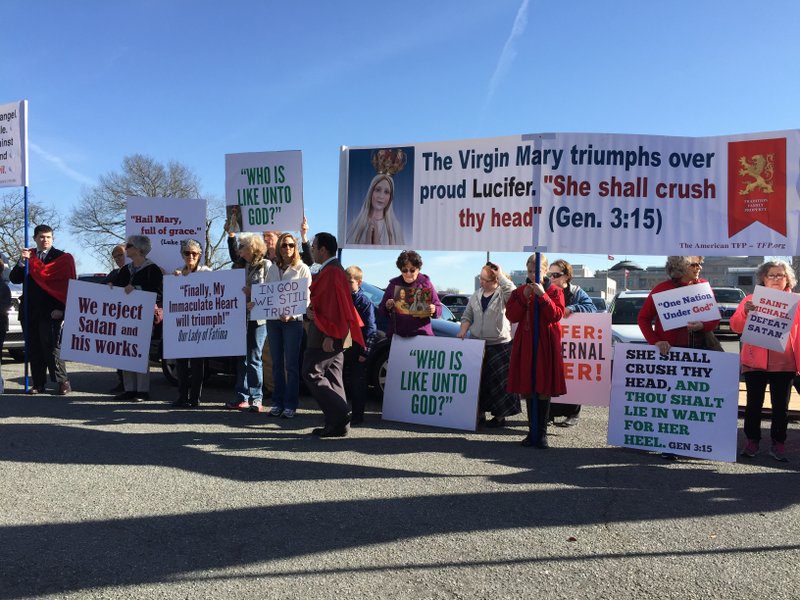 Members of the American Society for the Defense of Tradition, Family and Property, a national Catholic organization, traveled from across Arkansas to gather Wednesday, Jan. 25 in Little Rock to protest against a proposed Satan statue for state grounds.

A subcommittee of the Capitol Arts and Grounds Commission on Wednesday deemed the plans for a statue proposed by the Satanic Temple sufficient enough to move on to a public hearing phase.

The 10 subcommittee members met to consider a proposal submitted by the New York-based Satanic Temple to erect a 8.5-foot-tall bronze statue of Baphomet — a deity that is part man, part goat — on the state grounds. Lucien Greaves, a representative from the temple, briefly went over the construction plans and fielded a few questions.

The purpose of Wednesday’s meeting was to consider whether the application for the statue was sufficient, not whether it will or will not actually be placed on Capitol grounds, said Chief Deputy Secretary of State Kelly Boyd.

Members voted to approve the plans, and now the proposal must go through a public hearing, at which Arkansans can voice their opinions on the statue, Boyd said. That hearing will be scheduled at a later date.

Any monument erected on state grounds must be approved by the Legislature, so Boyd also suggested Greaves find a lawmaker to introduce a bill this session.

The Satanic Temple decided to put forth its proposal after Act 1231 of 2015, sponsored by Sen. Jason Rapert, R-Bigelow, was passed. That bill put in motion the construction of a monument commemorating the Ten Commandments to be built on Capitol grounds.

Subcommittee members previously decided the 6,000-pound statue built with private funds would be placed near the southwest corner leading to the Arkansas Supreme Court.

Members of the American Society for the Defense of Tradition, Family and Property, a national Catholic organization, traveled from across Arkansas to oppose a structure that gives the “devil a place of honor,” said Cesar Franco, a leader with the group from Texas.

“Americans are a God-fearing people,” Franco said, adding he and the group “repudiate” Satan’s works “with every ounce, with every fiber of our being.”

Franco led the group in a call-and-response, asking if they wanted a Ten Commandments statue and if they reject the Satanic Temple shrine. The answer to both questions from the crowd was yes.

About 30 protesters stood shoulder to shoulder, holding white posters with slogans such as “In God We Still Trust” and “Mary, Queen of the Angels, Crush Lucifer’s Head!” One demonstrator manned a blue and gold flagpole that anchored a red banner emblazoned with a gold lion flapping in the wind. The lion is the symbol of the organization, Franco said.

A smaller group of counter-demonstrators were also in attendance. Mason Hargett said he would prefer if no religious statues were erected on state grounds. But if the Ten Commandments monument is going to stand, so should a Baphomet one, he said.

The United States is a “religious plurality,” Hargett said, adding that there is no reason to put one religious monument over all the others.

Hargett said he showed up Wednesday to provide a contrast to the anti-Satanic Temple protest and show he and others who opposed religious symbols on government property are not “evil people” but “kind-hearted Arkansans.”