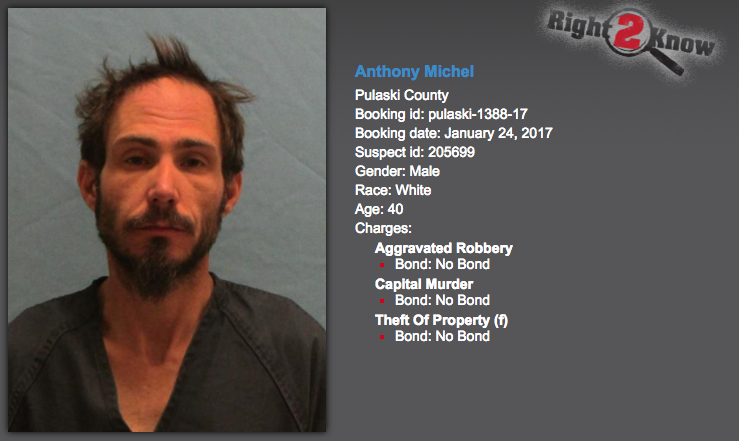 A Little Rock man who is the alleged accomplice of a would-be robber fatally shot by a pizza employee this week appeared via video in court for the first time Wednesday and had his bail set at $1 million.

Anthony Michel, 40, appeared on a video screen before Judge Alice F. Lightle in Little Rock District Court around 9:40 a.m. His public defender, Lisa Walton, waived a reading of the allegations against him that led to charges of capital murder, aggravated robbery and theft, all felonies.

The charges resulted from a shooting that took place around 1:30 a.m. Tuesday at the Bank of the Ozarks at 13415 Otter Creek Parkway.

Two Domino's Pizza employees, Nathaniel Carter, 24, and David Stricklin, 50, both of Little Rock, were depositing money when they were approached by Michel and 35-year-old Cornell James Drones of Little Rock, police said.

Both Drones and Michel were armed and tried to rob the employees, but there was a brief struggle, and Drones dropped his firearm, police said. Carter then picked up the gun and fired several times, striking Drones, authorities said.

As authorities were processing the crime scene around 4 a.m., police found Michel hiding in some bushes, a police spokesman said at the scene. Michel was arrested.

An accomplice in a felony in which someone is killed can be charged with capital murder, according to Arkansas' definition of the crime.

A hearing was scheduled for March 24.