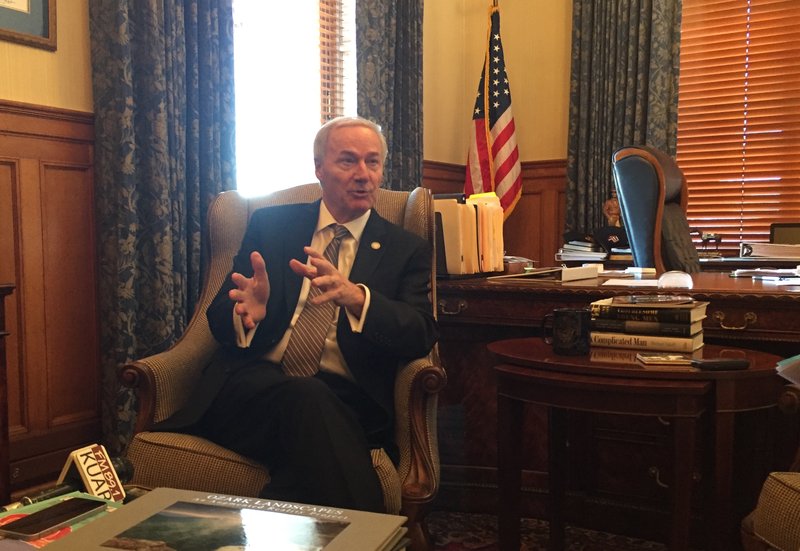 Gov. Asa Hutchinson said Thursday he is “hesitant” to support an idea put forth by one state lawmaker to ban the act of smoking medical marijuana.

Arkansas voters passed the Medical Marijuana Amendment legalizing the drug for medical purposes in November. State officials are setting up regulations on how the plant will be grown and administered.

Sen. Jason Rapert, R-Bigelow, recently told multiple media outlets that smoking the drug is harmful to people’s health and is an inappropriate way to administer medicine. No bill to ban the smoking of medical marijuana had been filed as of 1:30 p.m. Thursday.

When asked at a Thursday news conference if such a proposal conflicts with the spirit of the amendment, Hutchinson said he suspected Arkansans who voted in the law had “the visual of smoking” in mind.

"That carries some weight," Hutchinson said. "[What] was the voters' intent?"

Hutchinson later said Arkansans who want to grow marijuana in cultivation facilities must pay a $100,000 annual fee — the amount chosen by the Medical Marijuana Commission earlier this month. So if smoking the drug is no longer allowed, those licenses would be devalued, he said.

The governor said both the cultivation centers and the voters’ mindset make him “hesitant about shifting gears” to outlaw smoking medical marijuana.

“But I do think we need to continue to listen to the medical community and commission as they evaluate it,” he added.

Hutchinson also said it is important to remember the drug was approved to serve a medical purpose, not a recreational one. And doctors and those in the medical field are the ones who know best about how the substance should be given to patients, he said.

“This is something that just reflects the complexity of the issues we’re dealing with,” Hutchinson said.