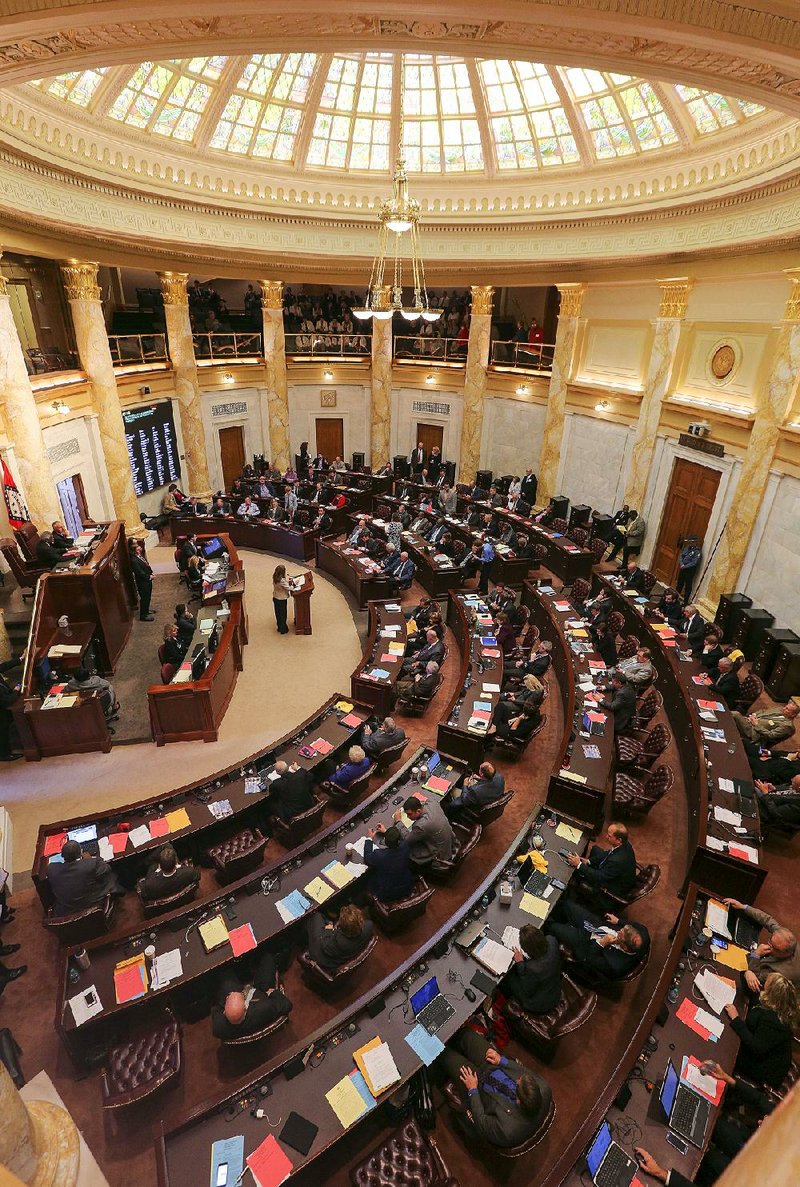 With only Sen. Stephanie Flowers, D-Pine Bluff, voicing her dissent, the Senate committee sent House Bill 1032 by Rep. Andy Mayberry, R-Hensley, to the Senate. Sen. David Sanders, R-Little Rock, who is the Senate sponsor of the bill, said he expects the Senate to consider the bill today.

The bill would restrict dilation and evacuation abortions. The measure would allow the procedure to prevent a serious health risk to the mother. It does not include exemptions for rape or incest.

A Senate committee advanced a bill Wednesday that would direct tobacco-settlement funds toward reducing the waiting list on services for the developmentally disabled.

House Bill 1033 by Rep. Andy Mayberry, R-Hensley, would allocate about $8.5 million annually to reducing the waiting list. The money would come from the state's portion of a national settlement with tobacco companies that had been directed to a now-defunct program.

The money could be used to offer services to both adults and children with developmental or intellectual disabilities who qualify for services. The money could help about 500 people on the 3,000-person waiting list, some of whom have been waiting as long as 10 years, according to Mayberry.

The Arkansas Conservative Caucus let out a series of whoops Wednesday to executive actions announced by President Donald Trump to build a border wall and deport illegal aliens with criminal records.

The caucus, a group of concerned citizens and activists, held a weekly meeting with lawmakers at the state Capitol to discuss updates from the regular session and efforts to back legislation.

Family Council President Jerry Cox told the caucus the group was preparing its "most offensive agenda in history," including five anti-abortion pieces of legislation, four bills dealing with home-schooling and a myriad of changes to the state's voter-enacted medical-marijuana law.

Cox said the Family Council is concerned about at least 20 areas of the "pot" law and could propose changes as individual legislation or through an omnibus bill.

Rep. Mary Bentley, R-Perryville, asked for the caucus' support for her bill to restrict food stamps from being used to buy junk food, a proposal she predicted would face a tough fight in the Senate. Rep. Bob Ballinger, R-Hindsville, asked for support to fight a Democrat-sponsored gun bill and part of the governor's tax plan that would create a sales tax on digital downloads.

House Bill 1298 would authorize the transfer of dispensary and cultivation facility licenses. It also would require that licenses be held by "natural persons."

Natural persons are individual human beings, as opposed to legal persons, which may be a business entity or a public organization.

The Arkansas Senate on Wednesday rejected a measure that would allow the Legislative Joint Auditing Committee to request that the attorney general file a civil lawsuit against a state or local government elected official or employee.

In a 14-18 vote, the Senate defeated Senate Bill 34 by Sen. Jimmy Hickey, R-Texarkana, who is co-chairman of the audit committee. Eighteen votes are required for approval in the 35-member Senate. The Senate later expunged the vote to open the door for another vote.

The bill would allow the attorney general to file a civil lawsuit against a state or local elected official or employee if legislative auditors have identified an occurrence of alleged malfeasance or illegal conduct, for example.

"It's an integrity bill for public officials and employees," Hickey told senators.

But Senate President Pro Tempore Jonathan Dismang, R-Searcy, said he's concerned that requiring committee votes to seek a resignation and repayment before referring the matter to the attorney general could lead auditors to lose their objectivity. "It seems like we are creating a trial before a trial."

Hickey replied that auditors wouldn't lose their objectivity under his bill, which he said includes various requirements before the committee referred certain matters to the attorney general to "make us slow down" and exercise due diligence.