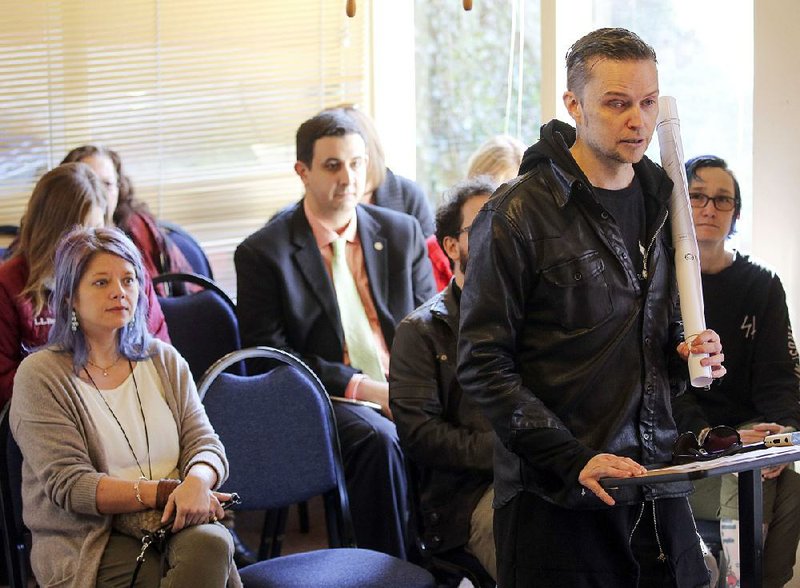 Lucien Greaves, a spokesman for the New York-based Satanic Temple, presents a proposal to erect a statue of Baphomet — a deity that is part man, part goat — to a subcommittee of the Capitol Arts and Grounds Commission on Wednesday, Jan. 25, 2017.

State officials on Wednesday advanced plans for a Satanic Temple statue on the grounds of the Arkansas Capitol. 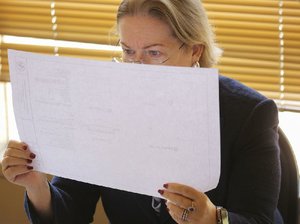 Photo by Benjamin Krain
During a meeting Wednesday, Capitol Arts and Grounds Commission member Catherine Johnson looks over plans for the 8.5-foot, 3,000-pound statue proposed by the Satanic Temple.

A subcommittee of the Capitol Arts and Grounds Commission voted that plans for an 8½-foot, 3,000-pound statue of Baphomet -- a horned figure with the head of a goat that is associated with Satanism -- were sufficient to move on to the next phase of the approval process, a public hearing.

A date for the hearing has not been set.

The New York-based Satanic Temple presented its final plans for the statue Wednesday as about 30 people protested outside the subcommittee meeting.

The Satanic Temple submitted plans for a Baphomet statue after Arkansas lawmakers, in 2015, passed a bill that allows a 6,000-pound monument of the Ten Commandments be installed on Capitol grounds. The law refers to God and the Bible and describes the Ten Commandments as "the moral foundation of the law" in Arkansas and the United States.

Opponents of the monument have said it violates state and federal laws, particularly the First Amendment, that prohibit governments from recognizing any one religion over another.

The Satanic Temple has argued that if the Ten Commandments statue is displayed on Capitol Grounds, then its Baphomet statue and monuments to other religions must also be displayed.

"We think having both sends a message that we still respect religious liberty and that the government has no place in dictating what is an appropriate religion and what is not," Satanic Temple co-founder Lucien Greaves said. "The government needs to stay neutral on items of religion and not endorse one over the other, give one exclusive privilege or cut another out of the discourse."

Capitol Arts and Grounds Commission subcommittees are scheduled to meet Feb. 9 to discuss the proposal.

State Sen. Jason Rapert, R-Bigelow, sponsored the bill to place the Ten Commandments statue at the Capitol. The statue, which was built with private funds, is set to be installed on the southwest part of the grounds near the Arkansas Supreme Court this year.

The Satanic Temple requested that its Baphomet statue be placed next to the Ten Commandments monument, but has accepted a location on the northwest side of the grounds at West 3rd Street and State Capitol Road.

Many who protested against the Baphomet statue Wednesday said they were Christians and supported a Ten Commandments statue at the Capitol. Among them was Judy Vance, who traveled to Little Rock with a group of women from St. Mary's Catholic Church in Hot Springs.

"Why would we want to honor the devil? That's going to hell," she said. "I don't want to go to hell."

Many protesters were members of the American Society for the Defense of Tradition, Family and Property, a national Catholic group. Cesar Franco, a group member from Texas, led protesters in prayer and religious chants. He said efforts to display a Baphomet statue on the Capitol grounds were part of a broader "Satanic revolution" that includes gay marriage and abortion.

"Americans are a God-fearing people," Franco said, adding that he and the group "repudiate" Satan's works "with every ounce, with every fiber of our being."

After a public hearing, the Baphomet statue must be approved by a vote of the Capitol Arts and Grounds Commission, according to Boyd. If that happens, the Satanic Temple will then need to find a legislative sponsor.

Greaves said he doesn't expect the project to advance past that point.

"I think what will happen is our monument will likely be denied, we won't find a sponsor," he said.

Other groups have also expressed opposition to the Ten Commandments statue. The state chapter of the American Civil Liberties Union and the Society of Freethinkers have warned of litigation if the state follows through with its plan to display the monument.

Laurie Flanagin, who was among the protesters from Hot Springs, said she didn't have a problem with state money being spent to defend the Ten Commandments monument in court.

"To me, in this day and age, there's nothing more important than what's going on with religion," she said. "So, to me, I'm happy to spend taxpayer money, my money included, on whatever it takes to get us to one nation under God."

The Oklahoma Supreme Court ruled in 2015 that a Ten Commandments statue installed at the state Capitol violated the state constitution and had to be removed. The Satanic Temple had sought to install a Baphomet statue in that instance, as well.

"I hope that people will really respect the value of church-state separation and keep their religious worship to their churches and homes," Greaves said.

Information for this article was contributed by Emma Pettit of Arkansas Online.