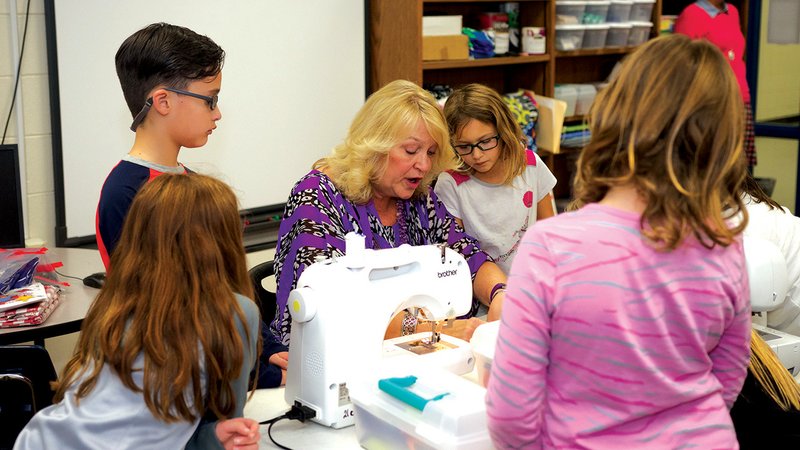 For 20 minutes after school on Tuesday and Thursday, third-grader Grady Smith spends time in the Ward Central Elementary School music room learning how to play the piano. When his lesson is finished, Grady, 8, will join the school’s fitness club, one of the many after-school offerings made possible by the Arkansas Department of Education.

Sponsored by a five-year Arkansas Department of Education 21st Century Community Learning Center grant, Ward Central students are provided with snacks, materials and transportation for Club Awesome at no cost to their parents or the school.

According to the Department of Education, the 21st CCLC program aims to provide academic enrichment during nonschool hours, particularly for “students who attend high-poverty and low-performing schools.” Ward Central, the only Cabot school to have this grant, is in year three of its grant, which allows the school to provide clubs within Club Awesome such as sewing, piano, fitness, tae kwon do, cooking and more.

“It provides a safe place for students before and after school, and the students who would go home by themselves and plop in front of a television? Instead, they are here being engaged, learning,” said Andy Sullivan, assistant principal.

About 120 third- and fourth-graders participate in Club Awesome after school, and activities for Club Awesome were chosen by student surveys.

Third-grader Nathaniel Rodriguez, 9, participates in sewing club and was formerly in art club. He said he joined Club Awesome because he was bored at home and needed something to do at school.

“It felt fun,” Nathaniel said of art club. “All of the other ones in the club would say, ‘I like your drawings,’ and that just made me happy in the inside.”

In sewing club, Nathaniel said, he has learned how to thread the machine and do a running and back stitch. In the future, Nathaniel might consider Lego club, he said, and would tell others to join Club Awesome.

“You get to do fun activities with other people around you, and you have something to do,” he said.

All Club Awesome instructors are Ward Central teachers who volunteer their time after school. Sullivan said the club allows students to see teachers in a different light and vice versa.

“Some of our kids struggle academically and may not feel successful during the day,” he said. “Come to after school, and they shine in some of these areas. Some of our sewers are not our strongest readers, but they come in here with something that’s hands on and shine. I think it really benefits their self-esteem.”

“It’s fun to do things after school that the kids may not get to do during the normal school day, and I love to do art,” she said. “I teach creativity throughout the day, and this is a way for them to express it after school, gives them something to do that’s outside the box.”

Thompson also helps students with literacy on Monday and Wednesday. To help them understand map-reading recently, students were tasked with studying a Disney World map, then creating their own amusement-park map and legend.

Fourth-grader Madison Powell joined Club Awesome because she thought it’d be fun to be around other people in a club atmosphere. She participates in the tae kwon do club.

“We’ve learned a couple of stances,” she said. “We’ve learned our first kata — it’s like a form of routine that we do — and we learned a lot of different languages of words. We learned about the history of how it started.”

“I wanted to have fun, and I never did it before,” he said. “I played tennis on Wii sports, and it’s really fun, so I wanted to try it in real life. It’s been fun and awesome, and I like having the opportunity to play tennis in real life.”

Thompson said Club Awesome is a great way to end the day and expose children to new opportunities.

“It’s rewarding to the teacher and the student,” she said. “I hear them talking about things in the hallway like, ‘Did you see my Aborigine art?’ Who does that in third grade? Nobody. When you hear it outside the classroom, it makes you feel like, ‘OK, they’re learning and having a great time.’”