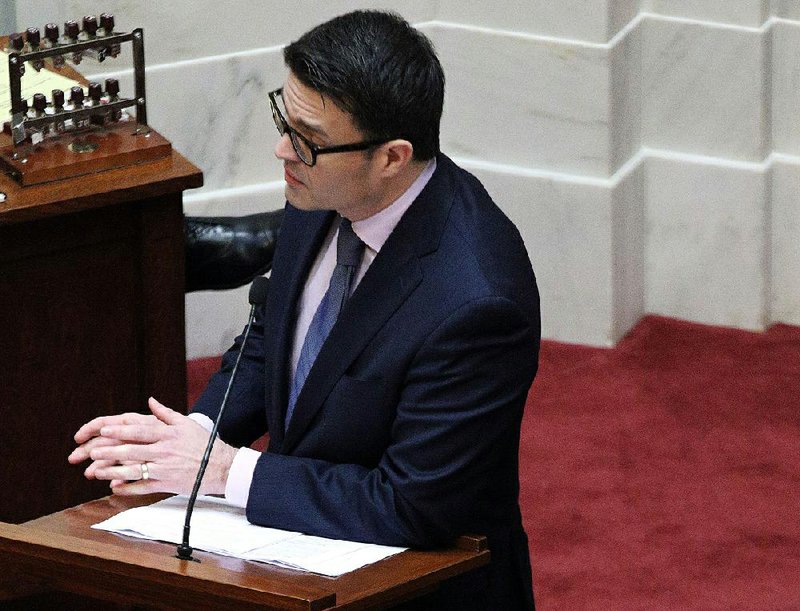 Sen. David Sanders speaks to the Senate on Thursday about the bill he co-sponsored, which places restrictions on a second-trimester abortion method.

Arkansas joined a half-dozen other states that have enacted restrictions on a common procedure for second-trimester abortions, with Gov. Asa Hutchinson signing the legislation hours after the Senate passed it Thursday.

The enactment of House Bill 1032, which restricts dilation and evacuation abortions, prompted the American Civil Liberties Union to promise to file a lawsuit against the state.

The bill, debated for 20 minutes in the Republican-majority Senate, makes it a felony to perform the procedure except to prevent a "serious health risk" to the mother. The ban does not include exceptions for rape and incest. The law takes effect 90 days after the current regular legislative session ends.

Courts in four of the six states with similar laws have delayed such bans from taking effect. Only Mississippi and West Virginia have implemented bans on the procedure.

Abortion opponents and the Republican sponsors of the legislation referred to the procedure as "dismemberment abortion," which they described as especially heinous and potentially dangerous to the mother.

But critics of the law point to dilation and evacuation as being the near-universally chosen method by doctors to end pregnancies in the second trimester. An alternative, medically inducing labor, has a greater risk of complications, according to the American Congress of Obstetricians and Gynecologists.

In Arkansas, dilation and evacuation was the only method used to end pregnancies beyond 12 weeks in 2015, according to Arkansas Department of Health statistics, and the method accounted for 638 of the 3,771 abortions performed in the state that year. The state bans abortions past the 19th week of pregnancy.

The Senate voted 25-6 in favor of the bill, sending it to Hutchinson, a Republican, who signed it in the afternoon, according to a spokesman. All six "nays" came from Democrats, while three members of the minority party voted in favor of the restriction.

Rep. Andy Mayberry, the lead sponsor of HB1032 and president of Arkansas Right to Life, said he was optimistic that the law would take effect later this year.

"There were promises of lawsuits," Mayberry said. "I hope it's not challenged, but I'm very confident that it is written in such a way that it will withstand judicial scrutiny."

A lawsuit seeking to block the law from taking effect will be filed by the ACLU of Arkansas, the group's executive director, Rita Sklar, said Thursday.

"This is not going to stand up to court scrutiny, and I think the sponsor and everyone who voted for this knew so," Sklar said.

Unlike in the House, where Mayberry's bill passed without debate, several Democrats in the Senate stood to voice concerns that lawmakers were subverting the medical opinion of doctors who use the procedure. Debate on the bill lasted about 20 minutes.

"I'm well aware that I'm not gonna change any minds," said Sen. Will Bond, D-Little Rock, after speaking against the bill.

The Senate sponsor of the bill, Sen. David Sanders, R-Little Rock, described the restriction as a compromise with abortion-rights supporters who echo former President Bill Clinton's sentiment in favor of "safe, legal and rare" abortions.

But Planned Parenthood of the Great Plains released a statement from CEO Laura McQuade calling the passage of the bill "an attempt to ban safe, legal abortion because of the ideology of a few elected officials under the dome."

"We will support any and all efforts to defend our patients' constitutional rights to safe, legal abortion," the statement said.

Later Thursday, lawmakers in the House passed legislation allowing parents to receive death certificates at their requests for miscarriages or stillbirths that occur after the 12th week of pregnancy. A previous law allowed for certificates to be issued past the 20th week of pregnancy, or for fetuses weighing more than 350 grams. 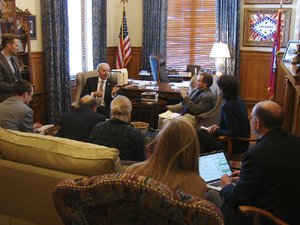 Photo by KELLY KISSEL / AP
Gov. Asa Hutchinson visits with reporters in his office Thursday to discuss a bill restricting an abortion procedure. Hutchinson later signed the bill, which will take effect 90 days after the end of the regular legislative session.

The sponsor of House Bill 1185, Rep. David Meeks, R-Conway, said he was responding to constituents who had been unable to receive death certificates after miscarriages, although the provision could also apply to parents who request certificates after abortions.

Speaking at a weekly meeting of the Conservative Caucus on Wednesday, Family Council President Jerry Cox said the group plans to support five anti-abortion pieces of legislation during the regular legislative session, with the stated goal of making Arkansas the "No. 1 pro-life state."

Mayberry said he had no plans to put forward additional abortion legislation this year, but he didn't doubt that other proposals could arise in the Legislature.

"I still think there are plenty of things that can be done," Mayberry said.