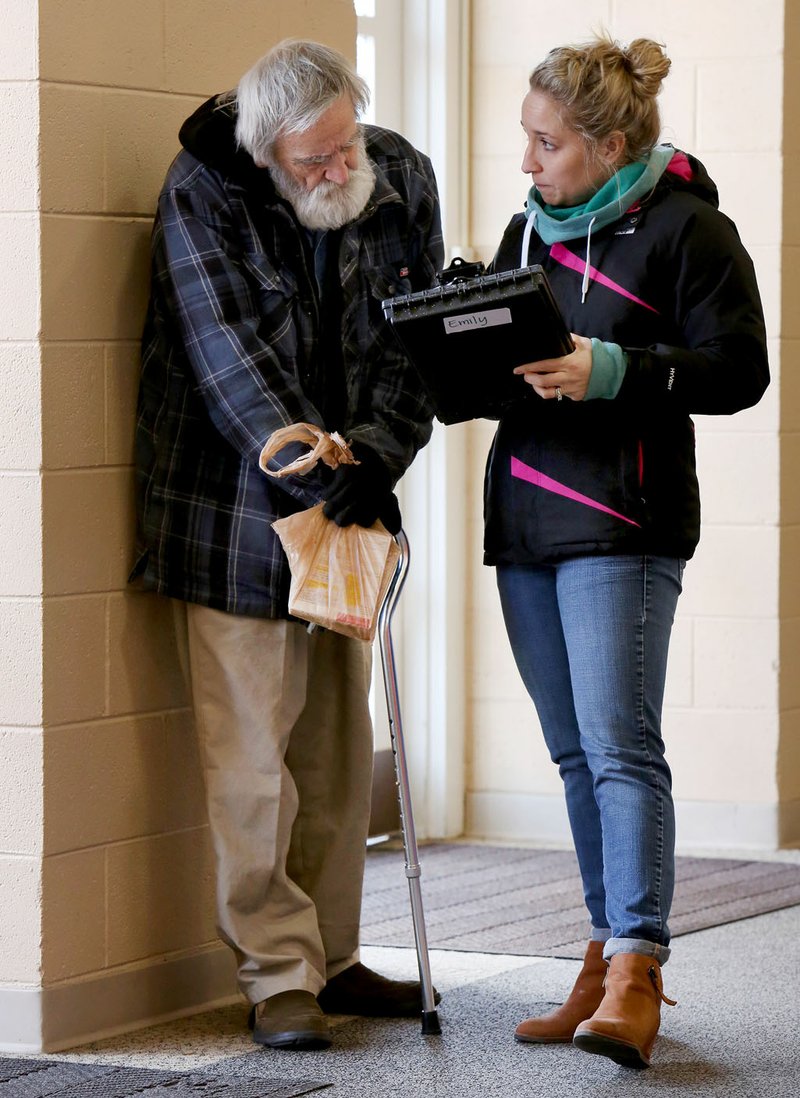 Emily Benson, a volunteer with the Northwest Arkansas’ biennial, 24-hour homeless census, interviews Don McNaughton, homeless, on Thursday in the lobby at Central United Methodist Church in Fayetteville. The survey is being done in both Benton and Washington Counties and was organized and implemented by the Community and Family Institute at the University of Arkansas. ( David Gottschalk)

FAYETTEVILLE -- Expensive medical emergencies, job loss and substance abuse all can leave someone homeless, but for Ronnie King, it started with a divorce about a decade ago. 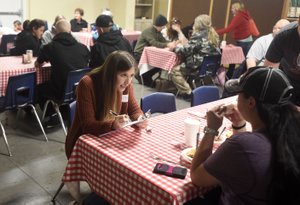 Photo by Michael Woods
Mary Beth Farrish, a volunteer with Pure Charity, talks Thursday with people at the Samaritan Community Center in Rogers as she and other volunteers gather information on Northwest Arkansas’ homeless population. Volunteers and researchers went out across the area to collect information during the biannual homelessness count for Washington and Benton counties. 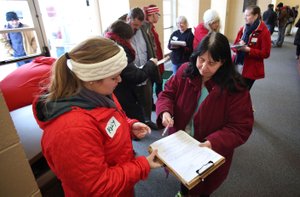 He lived in his car after that for a while -- "as long as the cops didn't arrest me, I could actually go to sleep" -- then bounced between a supportive family member and a few friends, King said Thursday. Now he lives in Fayetteville with a friend with severe liver damage, caring for him and doing landscaping work for a church and some other clients.

• 2,462 estimated homeless people in Benton and Washington counties at any one time

Of the adult survey respondents:

• 63 percent report mental illness at some point in their lifetime, commonly anxiety and paranoia

• 33 percent report time in jail in the past year

It's a good arrangement while it lasts, he said.

"If a lot of people had a place to lay their head at night, I believe they'd try to work and better themselves," King said. "It just gives you that inner peace."

King was among hundreds of people targeted by the region's sixth biennial homelessness census Thursday, a 24-hour snapshot of the problem done by the University of Arkansas Community and Family Institute. Scores of volunteers fanned out to about three dozen churches, shelters and pantries in Benton and Washington counties to tally perhaps thousands of people who don't have homes of their own.

The 2015 count found almost 2,500 people in such a situation, up slightly from 2013 but more than double the first survey's number in 2007. The figure included about 1,200 schoolchildren doubling up with friends or family members because their parents have lost their homes. Another 512 of all ages were in shelters, in the woods or on the streets, meeting the federal government's definition of homelessness.

Like past counts, this week's survey asked participants about their race and other basic information, where they've been sleeping, which health or social services they need and which they're getting. King, for example, said he goes to Central United Methodist Church in Fayetteville for spiritual support and occasional lunches.

"These are vital pieces of information that we provide all the service providers with," Kevin Fitzpatrick, a University of Arkansas sociology professor and the survey's organizer, told volunteers during an orientation Monday. "If you have an opportunity, stop and talk."

The findings are key to applications for U.S. Department of Housing and Urban Development grants for Northwest Arkansas programs connecting different nonprofit groups that tackle homelessness or provide rent assistance and job training. Such grants total about $380,000 for this corner of the state and more than $4 million for Arkansas this year.

The information can also guide groups such as Fayetteville's 7 Hills Homeless Center or the Salvation Army in Bentonville by shining light on who's becoming homeless and why.

The results of the count and interviews won't be available for at least several weeks, but Burchfield said the center had seen a slight uptick in the number of clients recently, with about 500 coming every month.

This year's count comes during a time of transition both locally and across the country. President Donald Trump nominated retired neurosurgeon Ben Carson, who's awaiting a Senate confirmation vote, to helm the federal housing department. Carson has said he believes the department should foster self-improvement and reduce "government dependency."

A Northwest Arkansas group called the Continuum of Care is also in the process of connecting the area's dozens of nonprofit groups so they can immediately refer people in need to domestic violence shelters, mental health services and whatever else they'd need to get housed again.

"That's what I am most excited about," said Raymon Carson, chairman of Continuum's board and regional director for Decision Point, a substance abuse treatment group in Bentonville. "We need to work together to serve the homeless in our area."

The interconnection among agencies was apparent Thursday morning at 7 Hills' day center on South School Avenue.

A few dozen people were eating bananas and cereal when a woman arrived carrying a young child. Other clients quickly started looking for a stroller; 7 Hills didn't have one, so one woman used the center's phone to call LifeSource International in Fayetteville to see if they had one. Another woman across the room called out to ask if Washington Regional Medical Center's mobile dental clinic, which provides free services to hundreds of people, would be at LifeSource that day.

LifeSorce is a nonprofit group helping children, individuals and families struggling with poverty and hunger.

Still, the broader connection effort is gradual: Continuum's meeting in March to choose its leadership before moving forward, Carson said. Fitzpatrick said he offered to provide and discuss his data in detail with the group without much success.

Fitzpatrick has long said the Continuum, churches, corporations and civic leaders must coalesce around a regional plan and rally the community to create affordable housing and truly dig up the roots of homelessness.

King said he tried to organize for another area shelter to give more people the peace of having a bed at night, but the discussions have never gotten far.

Concerted action is difficult because groups must focus on getting their own grants and taking care of their own clients and issues, Fitzpatrick said this week. He recommended finding a director of some kind who's familiar with homelessness and is committed to the issue but isn't tied to any one nonprofit group.

Carson said he broadly agreed with the idea of a more independent model for the Continuum and expected the group would become more involved with the count in the future.

"That keeps us connected as service providers to the population," he said.