Another PR cleared by Tori Weeks 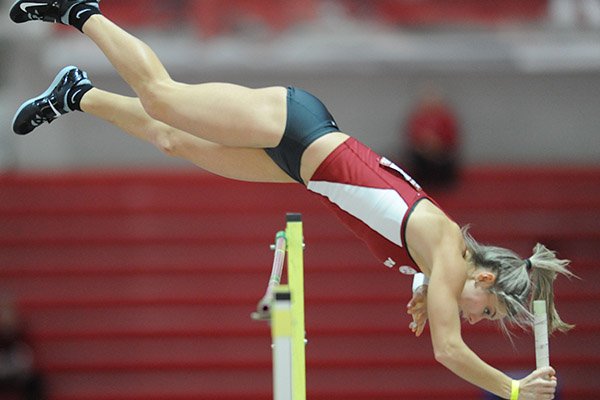 Tori Weeks of Arkansas clears the bar Friday, Jan. 27, 2017, during the pole vault competition in the Razorback Invitational in the Randal Tyson Track Center in Fayetteville.

FAYETTEVILLE -- Another week, another personal record for Arkansas' Tori Weeks.

Weeks, a sophomore from Cabot, cleared 14 feet, 10¼ inches Friday to win the pole vault at the Razorback Invitational.

Team scores after Friday’s events. The meet will continue today at 10:30 a.m. at the Randal Tyson Track Center in Fayetteville. The SEC Network will televise events live from 1 to 4:30 p.m.

It was the third consecutive week Weeks has improved. She went 14-6 two weeks ago at the Arkansas Invitational and 14-6¼ last week at the Vanderbilt Invitational.

"Coming into the season, I felt confident I was going to PR," Weeks said. "I did fix a lot of things since last year.

"But I think I've kind of surprised myself. I didn't expect to go PR, PR, PR, so it's been really fun and exciting. Hopefully, it can continue."

Weeks' twin sister, Lexi, took second in the pole vault with a season-best 14-6¼.

It was the second time this season Lexi Weeks -- who last year swept SEC and NCAA titles indoors and outdoors and competed for the United States in the Olympics -- was beaten by her sister.

Lexi Weeks, who last year had a personal-record 15-2¼ indoors compared with Tori Weeks' 14-5¼, never lost to her sister when they were freshmen.

"I don't mind it," Lexi Weeks said of her sister finishing first. "I mean, it definitely pushes me to be a better competitor, but I love to see her succeed.

"Her success is my success, honestly. I love seeing her jump 14-10. If she's going to go and put up that big bar, I can't be mad about her beating me."

Led by the Weeks twins, Arkansas' No. 2-ranked women's team scored 44 points and is second through the first of the meet's two days. Georgia leads with 52 points.

Razorbacks junior Taliyah Brooks, second at the NCAA meet last season, was a late scratch Friday because of a sore hip.

"You take what Kelsey and Leigha did and add Taliyah, that's going to be a very formidable group," Arkansas Coach Lance Harter said.

The top performances for the Arkansas men's team were third-place finishes by seniors Josh Washington in the 200 meters (20.71) and Andreas Trajkovski in the long jump (25-0¾).

"Those are the best sprinters in the country, and Josh was right in the mix," Razorbacks Coach Chris Bucknam said.

Arkansas junior Kenzo Cotton was fifth in the 200 (20.84), and junior Travonn White -- a transfer from Oregon making his Razorbacks debut -- went 24-5¾ in the long jump to take sixth.

The Weeks twins rank first and second nationally in the pole vault after their performances Friday.

"It's pretty cool," Tori Weeks said. "That's our goal this season, to go 1-2 at the SECs and nationals and put up big marks."

Lexi Weeks cleared 14-0 in the season-opening meet, when she felt tightness in her left hamstring. She didn't compete at the Vanderbilt Invitational but said her hamstring isn't an issue now.

"I feel good," she said. "It's not bothering me at all. Taking last week off I think was a good plan and helped me get ready for this weekend.

"After having such a long season last year, I'm kind of slowly getting back into it and trying to get my momentum back. Every meet and every jump I feel like I'm getting back to where I need to be."

Arkansas field events coach Bryan Compton said it was a good sign to see Lexi Weeks improve by 6½ inches over her first meet.

"Lexi is starting to get a little groove back here and there," he said. "This is just the second meet for her, and it's good to have her sister in there jumping really, really well."

Tori Weeks said it was frustrating to improve by only 1¼ inches last year from her top mark in high school, but that she was working through changes in technique and training.

"I think I just finally have my confidence back," she said. "That's made the difference."

"I think our guys in the 200 ran well," Bucknam said. "It's the first time our long jumpers have competed this year, so they were shaking the rust off."

Arkansas' distance medley relay was disqualified for an illegal handoff after the team of Obi Igbokwe, Brandon Singleton, Carlton Orange and Jack Bruce crossed the finish line in first. Oklahoma State was ruled the winner in 9:33.93.

"They said one of our guys had his foot was on the back of the exchange zone," Bucknam said. "It's disappointing."