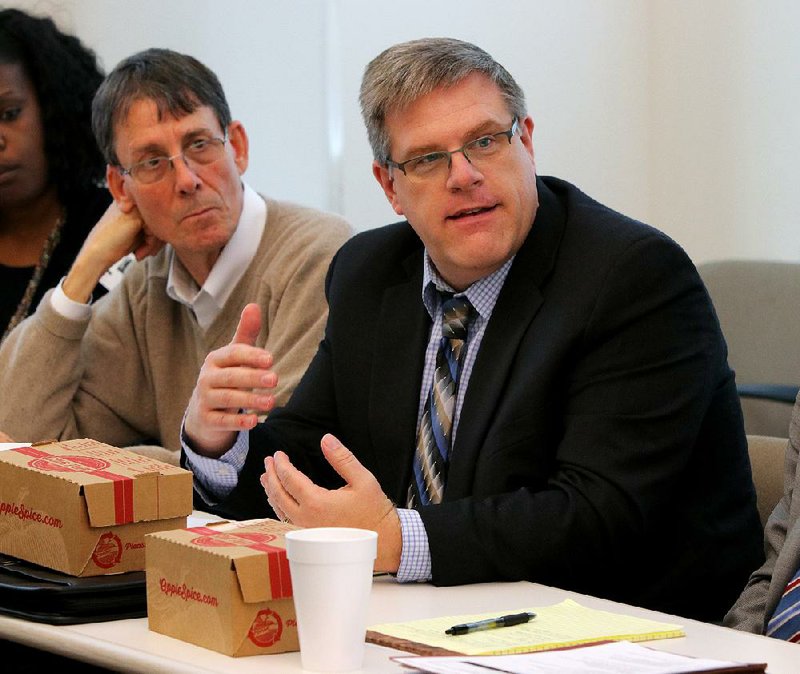 Tom Masseau (right), Disability Rights’ executive director and a member of the joint juvenile justice panel, is shown in this file photo.

Some Arkansas teenagers in state custody live in quarters that reek of urine, and at some juvenile centers, 11 youths share a single urinal and shower, a failure of accreditation standards.

Those are among dozens of findings of mistreatment at state-run juvenile facilities cited in a six-page letter sent Thursday to state officials and juvenile-justice experts by Disability Rights Arkansas, an advocacy group that operates under federal authority.

"The neglect rises to the level of abuse," Debra Pulin, the group's legal director, stated in the letter. "The ongoing daily violations of the rights of the youth committed to these facilities is unacceptable."

According to the letter, court-ordered treatment for many serious offenders is nonexistent.

One facility lost 13 of its 45 staff members since mid-December, further diminishing the youths' access to adequate mental and other forms of treatment, Disability Rights Arkansas monitors found.

Teens in state custody are required to continue to attend school, but "school" often consists of reading from obsolete textbooks, watching movies or playing the hangman game, the letter also stated.

Betty Guhman, director of the state's Youth Services Division, acknowledged there is much work left to do, especially considering the state's recent "emergency residential takeover" of the youth lockups from previous contractors.

But the director said the agency is making great strides to get "back on track."

Guhman pointed out ongoing efforts made by her staff to triage "immediate needs," mostly shifting the facilities from private to state-run programs. The goods and services needed to run the centers are "much more complex."

The centers -- in Colt, Dermott, Harrisburg, Lewisville and Mansfield -- house up to 249 youths in total. As of Friday, 216 were being held.

Other youths -- 57 as of Friday afternoon -- awaiting space at one of the state facilities are being held at county-run juvenile-detention centers scattered throughout the state.

Guhman addressed the group's findings further with fellow members of the governor-appointed Youth Justice Reform Board during an already scheduled meeting Friday.

"While we feel good about some of the things we've done, we are concerned about others," Guhman said. "We feel confident about our plan. It's just a matter of getting it down.

"A lot of issues are around timing," she added. "A month is too long. We are really working on that."

Executives with the nonprofits that previously operated the youth jails denied responsibility for the conditions the advocacy group found at the facilities. The nonprofits ran the sites for nearly two decades.

"We care deeply about the youth and want the best services possible for the boys in these programs," said Bonnie Boon, director of Consolidated Youth Services in Jonesboro. "I sincerely hope that all steps will be taken to assure the Harrisburg and Colt programs operate at the same quality as when CYS operated them."

"We had offered to keep our counselors going in, keep the sex-offender program operating," said Walsh, whose agency is based in Magnolia. "I did have a concern -- that kids do not need to change out counselors because of politics. I never heard anything back.

"This is a difficult business to manage," Walsh added. "I think it was underestimated by the state on how difficult it could be."

Samuel Kauffman, a staff attorney with Disability Rights Arkansas, said its letter is not about assigning blame but about "being clear about how children in [Youth Services'] custody are being treated."

Kauffman said the nonprofit stands by the entire letter.

"A lot of these problems pre-existed the [state] takeover," Kauffman told the Arkansas Democrat-Gazette. "Ultimately, the state is responsible. It's not to say there isn't some level of shared responsibility. But they have been made aware of this for years."

An Oct. 20 letter to Guhman from Disability Rights Arkansas documented concerns that also are outlined in the recent letter. The October letter focused specifically on the Dermott location although this week's letter says these problems occur at multiple facilities.

The nonprofit's monitoring efforts made waves in the juvenile-justice community years ago, when its staff unearthed instances of abuse and misconduct at the Arkansas Juvenile Assessment and Treatment Center near Alexander.

This, and the results of other investigations into practices at additional youth facilities, prompted the creation of the 21-member Youth Justice Reform Board, now given the responsibility of reshaping the state's juvenile-justice system.

Concerns about the quality of programs at some centers surfaced during a legislative committee meeting in December.

"We are nothing more than a day care and a warehouse," Jimmy Kirsch, a teacher at the Mansfield location, told lawmakers. "We shuffle students like commodities instead of individual human beings from one juvenile center to another, instead of rehabilitating them."

Kirsch said his remarks were supposed to reflect the negative work of South Arkansas Youth Services. Legislators did not ask any follow-up questions during that session.

It's been six weeks since Hutchinson ordered state officials to take over the juvenile facilities, beginning Jan. 1, saying he did so in order to avoid a "government shutdown."

Hutchinson's decision came two weeks before the contract at the time was set to expire and after lawmakers rejected a new multiyear, $160 million deal to run the youth lockups, intended for a private Indiana company.

The existing providers, Boon and Walsh, were vying for the contract and formally challenged the state's decision to go with the out-of-state company.

Legislators expressed further concerns about the proposed contract after the Arkansas Democrat-Gazette reported a connection between the new company, Youth Opportunity Investments, and G4S Youth Services, a for-profit that had managed the Arkansas Juvenile Assessment and Treatment Center near Alexander.