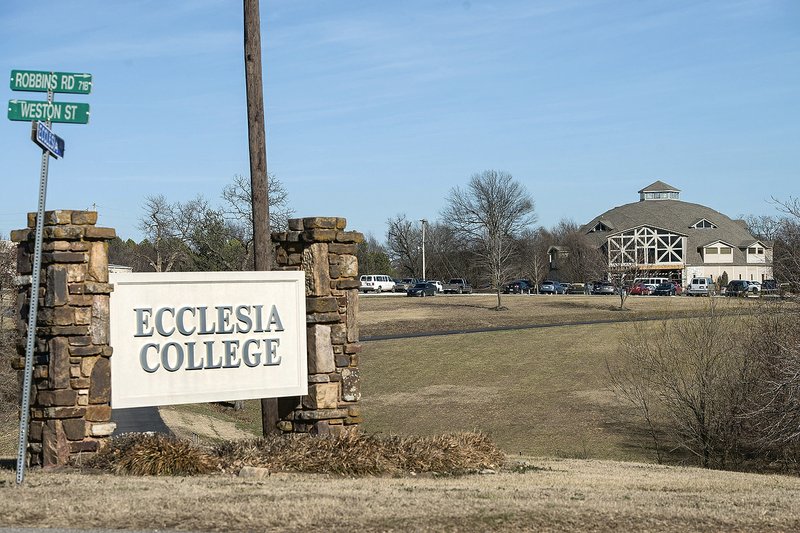 Ecclesia, a private Christian college, has been buying many parcels of land over the past several years for expansion. Ecclesia said in its grant applications it needed the land for student housing to accommodate rapid growth, but Springdale’s Building Department shows no new buildings or structural renovation have occurred on the properties.

Ecclesia said in its grant applications it needed the land for student housing to accommodate rapid growth in its fall 2013 and fall 2014 enrollments, but the Springdale building department shows no new buildings or structural renovation have occurred on the properties.

Another $100,000 from the fund to Ecclesia came through the West Central Arkansas Planning and Development District in Hot Springs. The only documents from legislators provided by that district in support of the grants came from Woods.

Ecclesia wasn't directly named in the federal court documents, but Neal's plea agreement says he requested a $50,000 grant be given to a private college in Springdale and an unnamed senator would request $150,000 for the school. The only grant Neal directed for $50,000 to a private college was for Ecclesia, according to records from the Northwest Arkansas Economic Development District, which administers the fund. His grant was awarded Dec. 18, 2014, a day after Woods directed a $150,000 grant to Ecclesia, according to the records.

A federal subpoena to the Northwest Arkansas district received Oct. 23, 2015, requested "all documentation related to any General Improvement Fund disbursements" related to: Ecclesia College, Owen Paris III, Woods and Randell Shelton. The subpoena didn't mention Neal or give any contact information for Shelton. Oren Paris III is the college's president and son of its founder.

Woods has declined requests for comment since Neal's Jan. 4 plea. Neal directed all questions since his guilty plea to his attorney, Shane Wilkinson of Bentonville. Wilkinson said Thursday he would have no comment.

Paris also declined to comment. He didn't respond to four messages, an in-person request at the college or an email. A Facebook post attributed to him says he can "assure you that neither I nor anyone associated with Ecclesia College has ever participated or engaged in any activity to provide money to Mr. Neal or any other legislator in exchange for the receipt of those funds."

He also stated "every effort was made to comply with every aspect of the law as we understood it."

The General Improvement Fund is made up of unallocated state tax money at the end of each fiscal year and interest earned on state deposits. Each legislator is given a share and can earmark where he or she wants it to go as long as it goes to a nonprofit group or government entity. The money is administered through one of the state's eight economic development districts.

General Improvement Fund agreements say the grants are to be used to "assist local public governmental jurisdictions and/or non-profit organizations to plan, develop, promote and/or implement economic and community development projects/activities designed to improve the economic, community and/or social well-being of the citizens of Arkansas." 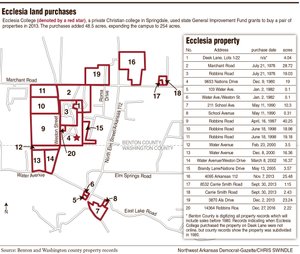 Ecclesia's grant applications in 2013 and 2014 say the money was needed to buy two parcels of land, 48.5 acres total, in Springdale between Elm Springs and Cave Springs, about 1.5 miles from the Ecclesia campus.

Ecclesia Inc. already owned 202 acres -- 155 in Benton County and another 47 in Washington County -- when it made its first request, according to county property records. Much of the land it owned is undeveloped, but houses and other buildings dot the 41 parcels. Ecclesia also purchased two smaller lots in 2013, adding another 3.5 acres. Property records show the college owns 254 acres.

The first grants Ecclesia received were for a 23-acre acquisition, student residence space and campus expansion, according to grant applications Paris filed with the Northwest Arkansas Economic Development District and two other development districts.

The northwest district awarded four grants totaling $242,500 in September 2013; the West Central Planning and Development District in Hot Springs awarded one grant valued at $50,000 in November 2013.

Grant closeout documents Ecclesia submitted to the West Central district include a warranty deed and other closing documents identifying the property it purchased with the money as 3870 Als Drive in Springdale.

The property includes a 3,186-square-foot home.

The county appraised the land and home in 2016 at $204,600. It appraised for $174,450 when it was sold in 2013, said John Williams, Benton County appraiser supervisor. He said the majority of the land is classified agricultural, which typically has a lower valuation than what it could sell for in a competitive market. Those valuations are set by the state.

Kathy Deck, director of the Center for Business and Economic Research at the University of Arkansas, said there are many reasons someone might pay more than market value for property, such as sentimental value, planned use, taxes or proximity to other property.

"That's why we look at the overall market, " she said. "Property values change."

The Northwest Arkansas district awarded an additional $150,000 grant and the west central district gave another $50,000 award between January and September 2014 for the Als Drive property.

Ecclesia's second request for grants from the northwest district asked for $200,000 on Dec. 5, 2014, "to purchase a 25.5-acre parcel of land with an existing student residence hall and shop facility adjacent to the existing Ecclesia College."

The next closest parcel is land Ecclesia has owned since the 1970s.

The grant agreement says the money is for "improvements," but the application says it is for "acquisition" of property.

Neal contributed $50,000 and Woods $150,000 in mid-December 2014. These are the only two General Improvement Fund grants the college received for the second piece of property.

The property includes a 2,556-square-foot home, a shop and a barn.

The county appraised the property at $352,850 when it sold and $267,150 in 2016, Williams said. He said it appears the appraisal went down because some poultry houses were changed to a storage area.

Several of Paris' grant requests for the properties say they are "critically needed space" for incoming resident students. In an email dated Dec. 11, 2014, seeking the second round of grants, Paris says the school has had "rapid growth in size of our student body over the past ten years since receiving accreditation, and we are now facing a potential crisis beginning in fall of 2015 with an anticipated record enrollment that will require additional housing and classroom facilities."

Paris didn't respond to a request for enrollment numbers or how many students live on campus, but Angie Snyder, Ecclesia's director of communications, said in a March Northwest Arkansas Democrat-Gazette report half of the college's 183 students are enrolled through distance learning.

The school bought three parcels adjacent to the campus across Robbins Road totaling 78 acres in 1997 and 1998 for $664,000. Most of the land is undeveloped; one lot contains 19 recreational vehicle spaces and a lodge.

Paris wrote in the December 2014 email the school plans to buy four large homes near campus, and each home would be renovated and converted into residence halls.

"The first of the four housing renovations is nearing completion as we look toward the upcoming fall semester," Paris wrote.

Paris didn't respond to a question asking about any new residential projects on campus.

There's no indication of residential developments being built on campus or on the two properties named in the grants.

The only permit the Springdale Building Department has on file for either property is one for electrical work in 2013 for the Als Drive property. The college hasn't asked for permits for new construction or structural renovation for either site, according to department records.

Mike Chamlee, chief building official, said the college wouldn't need any permits for work strictly cosmetic, such as painting walls or replacing sinks. He said permits are required if changes are structural, such as removing walls or moving plumbing.

Williams confirmed as of December, there were no building permits that would impact the Benton County appraisal of either property.

Several of the current and former legislators who directed money to Ecclesia said they did so because they support the college's mission.

"I believe in what they're doing, and agreed to support it after touring their campus," said Randy Alexander of Rogers. He was a state House member in 2013 and 2014 while he lived in Springdale. He directed two grants worth $26,500 to Ecclesia.

He was an outspoken critic of General Improvement Funds when he was a legislator and supported legislation to do away with the fund. Still, disposing of his share of the money remained part of his duties as a legislator.

Alexander also said he has known Paris for years and trusts his leadership.

Rep. Jim Dotson, R-Bentonville, is an alumnus of Ecclesia College. He directed $13,500 to the college, saying he believes the college is a worthy project that fit the criteria of a nonprofit enterprise.

Several legislators said they were told the college wanted to buy land, but added Paris and college supporters mentioned other needs as well.

Rep. Charlie Collins, R-Fayetteville, directed two grants worth $14,000 to the college. He said he became familiar with the college and many of its supporters during his first term in the House.

"They're a good place with a good mission," Collins said of Ecclesia.

• Ecclesia College is a work-learning college, which allows students to earn money toward tuition and graduate with much less debt than the average university student, according to the school website.

• It offers three associate of arts degrees, 12 bachelor degrees and one graduate degree.

• Ecclesia is accredited with The Association for Biblical Higher Education and a member of the National Association of Independent Colleges and Universities.